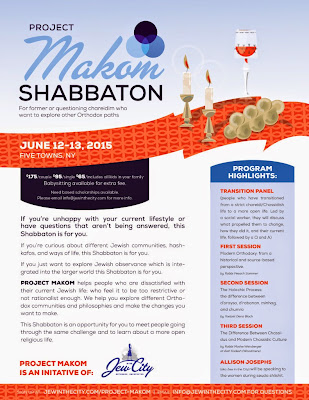 There is a fascinating Shabbaton for a truly under served group of Jews coming up in the Five Towns parshas Shelach, June 12-13. That group of people includes those who grew up in either chassidish or right-wing Litvish communities who have found that the way they grew up is not right for their shoresh neshama, their particular nature.

Some who fit this description may have "gone off the derech" in the vernacular. Some may have partly left the observance they grew up with and others may not have left it at all and may still live in the same type of community in which they grew up, but feel like strangers in their own neighborhoods.

The problem many people from this background face is that they may have a hard time accepting that anything other than the Yiddishkeit with which they grow up is really Yiddishkeit at all.

Many people adopt their community's belief that theirs is the only "true" Yiddishkeit. Accordingly, they feel that if the Yiddishkeit they grew up with is not for them, then Yiddishkeit generally is not for them. This is exemplified by one now-non-observant Skverer chassid who recently wrote an article explaining why those who embrace a different type of chassidus than what he grew up with are not real chassidim at all.

Because this particular problem is based on a misconception about what Yiddishkeit actually is, Allison Josephs (of Jew in the City fame), Mindy Schaper and Gavriella Lerner started a program they call Project Makom.  The purpose of the program is to provide programs, information, Shabbos hospitality, mentorship, and other resources for those "former and questioning chareidim" who are open to learning about other options within orthodoxy besides the one they grew up with. (In case there is any doubt, the purpose of the program is not to "lure" anyone away from their community of origin. As I understand it, Project Makom is geared toward those who have already come to believe [or are seriously considering the possibility] that the community in which they grew up may not be right for them.)

As a major part of this effort, they are holding a Shabbaton in less than three weeks in the Five Towns, in Long Island, NY, on June 12-13, parshas Shelach. They will have speakers like Pesach Sommer and Yoetzet Dena Bloch. Others will address the important distinctions between minhag, Deoraisa, and Derabanan. And several former chareidim will speak in a panel on how they transitioned out of the communities in which they grew up into other frum communities. The Shabbaton will mainly take place in Cedarhurst.

I'm most excited about the fact that the Shabbaton participants will be trekking over to Woodmere Shabbos afternoon to hear Rav Moshe Weinberger speak on: The Difference Between Chassidus and Modern Chassidic Culture. The really great opportunity for the participants is that after the shiur, they will have the opportunity to ask Rav Weinberger questions during a Question-and-Answer session.