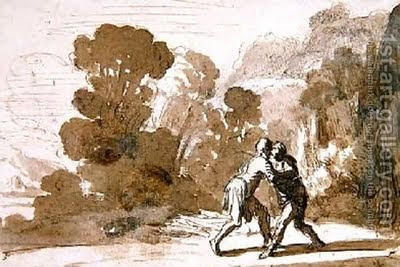 "וַיִּוָּתֵר יַעֲקֹב לְבַדּוֹ וַיֵּאָבֵק אִישׁ עִמּוֹ עַד עֲלוֹת הַשָּׁחַר. וַיַּרְא כִּי לֹא יָכֹל לוֹ, וַיִּגַּע בְּכַף-יְרֵכוֹ;
וַתֵּקַע כַּף-יֶרֶךְ יַעֲקֹב בְּהֵאָבְקוֹ עִמּוֹ."
“And Yaakov was left alone, and there wrestled a man with him until the breaking of the day. And when he saw that he prevailed not against him, he touched the hollow of his thigh; and the hollow of Yaakov’s thigh was strained as he wrestled with him.”[1]

Rashi explains: “‘And Yaakov remained’—he returned to retrieve some small vessels he had forgotten. ‘And there wrestled [וַיֵּאָבֵק] a man’—Menachem explains this word means that Yaakov got dusty from the dirt [אבק] that got kicked up during their struggle. But I think this comes from the Aramaic word that means to bind oneself to another, since this is the way of two people when they fight. They grapple with each other, each attempting to fell his opponent. Our rabbis teach that this was Eisav’s heavenly counterpart, his “angel.”

Rebbe Nachman teaches in the “Seven Beggars,” which is the last of his remarkable tales, that there are two different types of tzaddikim. The first tzaddik is “without hands.” [Because of the illusory nature of this world, he appears to be deficient in the attribute that he has actually perfected. This tzaddik actually has wondrous spiritual power in his hands.] The task of this tzaddik is to heal the princess [the Jewish soul, the Shechinah] from the arrows shot at her even after they have already inflicted harmful wounds. This tzaddik alludes to Moshiach ben Yosef who embodies the general level of chayah. [Chayah is equivalent to Chochmah; it is the intense vitality and spiritual wakefulness that is the gift of Chochmah.]
This is the secret of the Tikkun HaKlali, the “general remedy” that expresses the fourfold song that will be sung in the ultimate future. This new song is described in the Tikkunei Zohar as a “single, double, triple, and quadruple song.”[2]

Rebbe Nachman did not speak at length about the second tzaddik “without legs,” but Rav Avraham ben Rav Nachman reveals that the beginning of the story sheds light on his task at the end. In the beginning of the story, we find that the prince fell to heresy. We see that the tzaddik without legs is Moshiach ben Dovid whose task will be to cure the King’s son of the ills of apostasy.

These two aspects allude to the two major klippos that cause Jewish souls to sin. The first attacks Yesod / Foundation and breaches personal purity and is symbolized by serpents. The task of Moshiach ben Yosef is to heal Jewish souls of these blemishes that are known as “snake venom.” He must inject powerful sanctity in us all to counter all such negative effects. The second aspect of Moshiach ben Dovid will rectify blemishes in Malchus [accepting Hashem’s Kingship], which are the many heresies and negative philosophies that abound. This second evil is stronger than the first and is much harder to heal.

The Arizal taught that the supernal light of Chanukah and Purim rectify both blemishes of the wound of Yaakov through the powers of Moshiach ben Yosef and Moshiach ben Dovid.

On Chanukah our task is to gaze at the candles and contemplate that the entire creation is from Hashem, since nothing exists but Him. We must think about this deeply until we are filled with a powerful yearning to serve Hashem through “running and returning.”

We must remember that the candles are ideally lit with olive oil that has been “crushed to give light.” This means experiencing the passionate subsuming of the self within the absoluteness of Hashem so that one becomes willing to sacrifice himself to serve Hashem with holy fire. At the same time, we must ascend and be included with the Primal Cause and feel the pleasure of connection with Him.
One who follows this path will stop falling prey to his physical desires, since what is really drawing a person to indulge is the G-dliness that is trapped within physical reality. The moment that tzaddikim feel drawn to partake of an unnecessary physical pleasure, they transform the impulse into a vessel that receives the light of Hashem. Through self-sacrifice, they merit the deep pleasure of oneness with Hashem. And the more material and slowly the craving, the stronger the vessel forged by rejecting it with self-sacrifice. The more that evil tries to entice a person and prevent him from ascending on high, the more his fiery yearning makes a ner tamid, an eternal flame, that embodies both nullification of the self and taking pleasure in the Creator.

Picture courtesy of 1st art gallery. Click here to get Dixie Yid in your e-mail Inbox or here to subscribe in Google Reader.
Posted by DixieYid (يهودي جنوبي) at 8:33 AM