Will My Davening Ever Bring Such Nachas to the Aibishter? - Guest Post 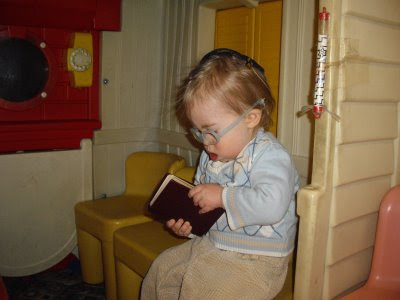 A fellow newly discovered jblogger from Dixie wrote the following, but didn't want to post it under his own name because of the people involved in the story. But it's a nice reminder about what davening really means.

I just began reading Rabbi Twerski’s book, Twerski on Prayer. I have had it for awhile but just starting it. In the introduction, he writes about rote davening vs. real davening and recalls a visit to the Kosel where he felt he was really davening well and noticed a guy talking to the Abishter about his day and things that were important to him. the guy stopped in mid-sentence and said something like “oh, I told you that yesterday.” Rabbi Twerski then thought about how his davening was so ineffective compared to this yid who could just talk to G-d.

Last shabbos, some dixie-town alumni were back in town with their kids, one of whom has Downs Syndrome. I saw this on a the link from a blog you e-mailed to me, and had a similar experience to the one Twerski wrote about. This boy has no hesitation about singing out in shul and came up for the end of the service with his brother and for adon olam. His speech is barely understandable. And his singing, such as with Ein Kelokainu or Adon Olam for instance, produces loud sounds with an occasional syllable from which the listener can make out something familiar.

During Adon Olam, when all the kids go up, my youngest, the 5 year old, kept turning around to look at this family's son, who would wave him to turn back around. And then it hit me that these sounds that he was making were so pure, so real. Real davening. He was unconcerned about those people around him even though he certainly knows that he doesn’t sound the way the “regular” people sound, but he was not at all ashamed or uneasy. I had started having fancy thoughts of "tircha on the tzibor" vs. rachmanas on the family, but then it hit me. My davening may never penetrate so many gates, so quickly, and so innocently bring nachas to the Abishter.

Picture courtesy of Our Mendele. Click here to get Dixie Yid in your e-mail Inbox or here to subscribe in Google Reader.
Posted by DixieYid (يهودي جنوبي) at 3:30 PM