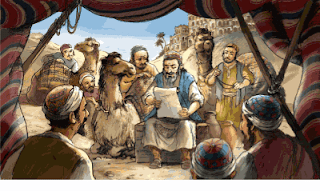 I saw the most amazing drush by the Rambam quoted by Devorah in her Voice After the Fire blog.
The piece she quoted is in the Rambam's Igeres Hashmad, which he wrote giving a community guidance on how to handle the forced conversion issue and how to deal with Jews who had converted out under duress.
A certain rav wrote the community that if a Jew had converted out, that they should be shunned and booed out of shul if they ever showed up and that any mitzvos they fulfilled in secret counted for nothing. This is understandable in the sense that it was important to them to send a message and set an example to prevent others from succumbing to the the pressure. They didn't want others to think they could convert out for the sake of expediency, thinking that there would be no consequences if they did so.
But the Rambam wrote the community, telling them that people who, r"l, converted out or broke Shabbos should not be shunned or chased out of shul, but should be welcomed and that all of the mitzvos they performed in secret were very precious. And he did so quoting a very chassidish sounding drush. I would not be surprised seeing something like that in the name of Reb Levi Yitzchak of Berditchev. Here's that key part from the Rambam:

It is also not appropriate to distance oneself or show disgust at those who desecrate Shabbos. Rather, draw them close and encourage them to do the mitzvos. Chazal have already explained that [even] a sinner who sinned willfully, when he comes to shul to daven, we accept him and do not humiliate him. They relied on that which Shlomo Hamelech said in Mishlei (6:30), "They will not despise a thief if he steals to sate [his apetite because he is hungry." Do not despise Jewish sinners who come in secret to "steal" mitzvos.

So beautiful! The Rambam does not just explain the pasuk in Mishlei to mean that just like one should not be too harsh on a thief if he steals because he feels forced to do so by starvation, he should also not be too harsh on Jews who converted out under duress. Rather, he takes it further and says that when the pasuk discusses thieves, it's refering to Jews who have fallen out of the fold but are now coming back just a drop to "steal" a few mitzvos. Don't despise them but honor every little effort they make to come closer to holiness.
Picture courtesy of The Destiny Foundation.
Click here to get Dixie Yid in your e-mail Inbox or here to "follow" me on Twitter.
Posted by DixieYid (يهودي جنوبي) at 8:00 AM

Wow amazing thanks for sharing this