It boggles the Mind 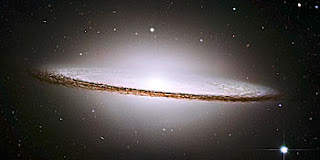 Please check out these ten pictures. Please focus on them, and try to comprehend them as best you can, then join me for the next paragraph...

I was discussing this with my wife. These are composites of many pictures from the Hubble Telescope. Just think about it for a few minutes. You and I look like dots compared with the size of the entire earth. But the earth looks like a tiny speck compared to the size of our sun, 98 million miles away. Yet our sun looks like less than a tiny speck relative to the size of our entire galaxy, made up of billions of other suns. This already boggles the mind.

Then consider that Sombrero Galaxy. It is made up of over 800 billion stars. And to go from one side of it to the other is a distance of 50,000 light years. That means that, traveling at over 186,000 every single second, it would take a beam of light 50,000 years to travel just from one end of that one galaxy to the other end of it, not to mention to get to us...

All of this makes me think; Compared to us physically, the universe is so unbelievability immense, that our minds can't begin to grasp our inability to grasp it's enormity. But if the whole point of the whole universe is the free will avodas Hashem of us here on earth, why does Hashem want to make the universe so huge? What's the point?

My wife and I were discussing ideas the other night after looking in wonderment at these pictures, and she had a thought. Knowing that the entirety of physicality, as mind-boggelingly large as it is, is still finite, and Hashem is infinite, we can realize that as mind-blowing as our universe is in it's power and greatness, it's literally nothing to Hashem. The universe isn't any "bigger," relative to Hashem than a grain of sand here on earth. Relatively speaking, anything finite is as if it were nothing.

So perhaps Hashem made the universe so "big" as a way of teaching us just how incapable we are of comprehending Hashem himself. If we can't comprehend the size of the universe, then "kal v'chomer," we realize that we can never comprehend Hashem. This adds to our Yiras Hashem and Yiras Haromemus.

If anyone has other ideas, (I'm sure there are many!) please share them.

Email ThisBlogThis!Share to TwitterShare to FacebookShare to Pinterest
Labels: Musings