One Must Destroy in Order to Build- Part II 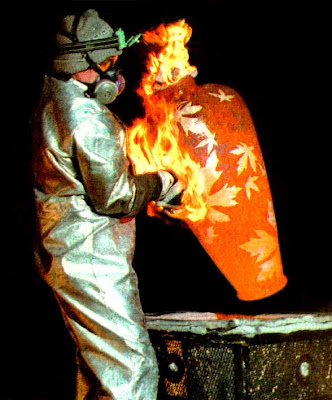 This post is a continuation of a similar theme in this post.
In the the 15th perek of Bilvavi Mishkan Evneh Vol 2, the author writes about the concept in Mishlei 24:16, "כִּי שֶׁבַע, יִפּוֹל צַדִּיק וָקָם," that the Tzadik must fall seven times and then get up. He brings down the concept that those failures (whether in thought, wanting, speech, or action) are not an obstacle to growth, but an integral part of the process.

He illustrates this with a startling ma'aseh about the GR"A and his Talmid, Rav Chaim Volozhiner. He says that the GR"A put himself through a self-imposed exile for a period of time. When he returned, his talmid Rav Chaim asked him whether or not he should also engage in that same avodah of self-imposed exile. The GR"A responded that, "I did it, but now I regret it." (Ostensibly the trials of exile disturbed his Torah learning, but the author doesn't go into the reasons he regreted it.) Rav Chaim, his student, responded, "Then I will do as you did. I will go into exile and then I will regret it."

The ma'aseh seems almost incomprehensible at first glance. Shouldn't Rav Chaim have learned from his rebbe's mistakes and not repeated them? However, the purpose of the ma'aseh is to teach this counter-intuitive yesod: We grow into the bigger Jews not by continuous successes in avodas Hashem, but specifically because of the failures.

I saw this illustrated in another way through a Tosafos in Avoda Zara 34a. The Gemara is discussing how clay vessels that are lined with not-fully-"cooked" glass (according to Tosafos) can never be kashered (if they were used for hot non-kosher food). Tosafos ask on this that we see from another gemara that a clay vessel can be kashered by re-firing it in the kiln! He answers that though it is true that the vessel would become usable that way, it is not because the vessel is called "kashered." It is because when it emerges from the kiln, it is considered a totally new vessel, not a kashered old vessel. "Kashering" a non-kosher clay vessel is impossible.

I see this as an expression/mashal of this same yesod on a physical level, when it comes to absorbtion of traif food in clay vessels. "For [we are like] clay in the hands of the Potter." We are also compaired to clay vessels. We also cannot fully give up what is not-kosher about ourselves without going into the fire and nullifying the "self" so that when we come out, we will be new Jews, able to ascend to the next level, unencumbered by past failures. But it is only through destruction/failure, that we can be a new vessel again to receive the Divine light.