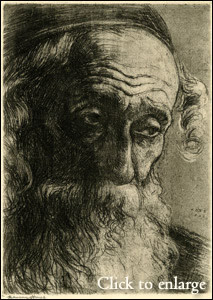 This posting can also be found at Mystical Paths, where I'll be making some guest posts for the next couple of weeks, while R' Akiva and R' Nati work on perfecting their new podcasts. Well worth the listen!

I saw a very interesting and somewhat troubling ma'aseh in Rav Shlomo Yosef Zevin's sefer, "Sipurei Chassidim," on parshas Matos, relating to the seriousness of oaths.

There was a Chassid of the Shpoler Zaide who was unable to have children. He tried appealing to his holy rebbe many times to intercede with Hashem so that he and his wife could have a child. Every time, the Shpoler Zaide would push him off and find some reason not to accede to his request. On one occassion, the Chassid was at his wits end and made the decision that come-what-may, he was going to go over to his rebbe and was not going to leave him alone until the Tzadik would decree that he would be saved from his tzaros.

When he got there, the Shpoler Zaide was immersed in his thoughts and was involved with the higher worlds. He asked the Chassid to please leave him alone right then, because he was involved in matters involving the whole Jewish people and the time was not right for being involved with the problems of the individual. The Chassid felt like this was the perfect time of Hashem's willingness, so he continued to pester his Rebbe to give him a child without letting up. The Shpoler Zaide begged him to stop, because he was unable to concentrate with all of the commotion the Chassid was making. Eventually, the Tzadik could not longer take it, and he yelled at the Chassid, "I swear to you that you will never have children!"

The Chassid was extremely shaken and frightened by the rebbe's words and he said, "If so, I see that my root soul has no place here," he said "Shalom," to the tzadik and left.

After some time, he found himself in Koritz on business. After davening one morning there, he saw Rav Pinchas of Koritz, before the time when R' Pinchas was known as a tzadik. He was a sharp minded though and he could see that there was something very special about this Jew, even though no one else showed him any special deference. It was a few days before Pesach and after watching R' Pinchas daven, he was sure that this man was a very special tzadik, so he came up with a plan to see if R' Pinchas could help relieve him of his childless state. He went to R' Pinchas' house and asked his wife what they had for Pesach. She said that they were very poor, and unfortunately they had absolutely nothing. Therefore, he told her that he would provide them with everything they needed for Pesach and asked that he be their guest over Yuntif. She agreed.

The whole erev Pesach, he supplied them with a new table, chairs, all of the money she would need to buy Matzos, wine, fish, and meat for the Yomim Tovim and Sedorim. The whole day he went back to their house many times to check and see what they were still lacking and he supplied it in generous supply. Reb Pinchas knew nothing of this because he was immersed in his learning and avoda all day. He was actually suprised that his wife had not called him home to provide for the needs of the seder, since he knew they had nothing. He was happy, however, that he was able to devote all of his attention to the avoda of the day.

When he got home that night for the seder, he was astonished to find everything provided for in such a way. He asked his wife who was responsible for all of that and she introduced him to the Chassid. He greeted the guest but asked him nothing else. After the first two kosos of the Seder, he asked the Chassid, "What brings you here and what is your request?" He told R' Pinchas everything that had happened and the story with the Shpoler Zaide and the oath. He asked Rav Pinchas to find a way around the Shpoler Zaide's oath in order that he have health living children. R' Pinchas answered, "If I have some merit in shamayim, I swear to you that this year, your wife will have a son." And that is exactly what happened.

When Rav Yisroel of Ruzhin told this story, he added that there was a big dispute in Shamayim. Whose oath should give way to whose? The oaths of both Tzadikim are mutually exclusive. It was eventually decided that whichever Tzadik had never made an oath in his entire life, even a true one, would have his oath fulfilled. Since R' Pinchas Koritzer had made no oath his entire life, the Shpoler Zaide's oath had to make way for R' PInchas Koritzer's oath. However, such a thing does not happen without consequences, and that son that was borne of R' Pinchas' oath turned out to be a Rasha and a Moser.

Ad kan is the story. I have many questions that I want to leave you with. Why did the Shpoler Zaide push off the Chassid's request so many times before that fatefull day of the oath? I heard another story which is very similar about the Baal Shem Tov where he was hesitant to give a bracha for a child because of the avreiros that child would do. If that was the case here too, then perhaps the Shpoler Zaide had very good reason not to want this man to have a child... Relatedly, what is the dividing line between when you insist on help from a Tzadik despite his efforts to push you off, because those obstacles are merely a test, and when should a person listen to the Tzadik to stop trying? Please ponder!

I have heard many Chassidic stories, where a tzaddik refuses to give a brocha to a person because the tzaddik wants the person to understand that the brocha comes from Hashem and not from the tzaddik. In many of these stories the tzaddik is essentially telling the person that he needs to daven harder himself and to only put his trust in Hashem and not in man.

ASJ, so maybe that was the intention of the Shpoler Zaide. Then perhaps the Rav Pinchas Koritzer felt that he could not make that cheshbon out of a sense of hakaras hatov to the Chassid...