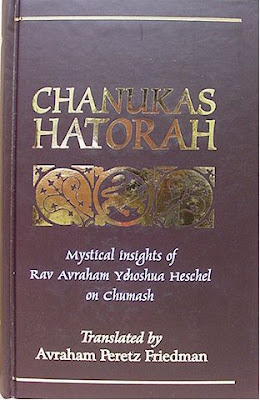 This d'var Torah came from Reb Yaakov Horowitz. Thank you for sharing!

The Rebbe, R' Heschel, explains as follows: Chazal say that a rasha may not
be burried next to a tzaddik, and by the same token a tzadik she'aino hagun (a
Tzadik on a lower level) cannot be burried to a tzadik hagun (a Tazadik on a
higher level). So how could Yaakov, who was the b'chir sheba'avos (the
choicest of the Forefathers), and therefore on a significantly higher
madregah (relative to the other Avos) be burried next to the other
avos? Chazal (our sages) say that Hashem told Yaakov that he
will lay next to his forebearers but will not die - "Yaakov avinu lo
meis." We also know from Chazal that tzadikim be'misasam are on a
higher level than be'chayeihem, in their lifetime (the righteous
attain a higher level of sanctification after they die than while they are
alive).

So from all this we conclude the following: The other Avos were on a
higher madreigah after they died than while they were alive - in accordance with
the previously mentioned Medrash. Yaakov, however, was burried despite the
fact that he has never died. So the other Avos on their higher post-mortum
madreigah (level) were on par with Yaakov in his alive madreigah. So
Yaakov says "veshachavti im avosy" - I will lay with my fathers - but not
dead according to what Hashem tells him. Therefore since he is not dead
and the others are dead - their madreigos match up more evenly. Therefore
it's ok for them to be burried next to each other! So then Yaakov goes on
to say "uk'vartani b'kevurasam" - now I can be burried next to them!

Thanks for the dvar Torah Reb Yaakov!
-Dixie Yid