Hello Potifar, If That Really *IS* Your Name... 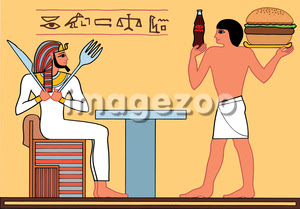 Here are couple of things I realized about Potifar and Mitzrayim. I haven't seen them anywhere and haven't had time to look at the meforshim to see if this idea is obvious or off-base...

In the first aliya, the wine-server says to Paroh"... וַיִּתֵּן אֹתִי בְּמִשְׁמַר, בֵּית שַׂר הַטַּבָּחִים..." (Breishis 41:10) that he had been placed in the jail belonging to the שַׂר הַטַּבָּחִים, the head caterer of the palace. Since Yosef was in that jail too, he was also in the jail of the Palace's caterer/chef. If Yosef was a household slave, why was he sent to the Caterer's prison? It must be because Yosef's "master," Potifar was the Minister of Catering for Egypt. This would explain also why he was in jail specifically with two members of the royal wait staff, the wine-server, and the bread-server. It also implies that each minister in Egypt got their own private jail...? Interesting policy.

That got me thinking about Potifar I noticed that his name is a contraction of two words, "פּוֹטִי," which means "stuffed," and "פַר," which means "cow". So Potifar literally means "stuffed cow." Based on that, his name would be quite fitting with his profession, as the Minister of Catering for the Egyptian palace. It would seem, then, that Potifar was not his given name, but rather was the title that was given to him when he attained the post of Minister of Catering. This would be similar to Yosef being renamed "צָפְנַת פַּעְנֵחַ," which means that he is "mefaneiach tzefunos," that he reveals that which is hidden. This became his name only because of his position as second to the King. So perhaps Potifar also had his name only as a reference to his title (in addition to Rashi's pshat on the name).

So is all of this right? Obvious? Totally wrong?

Update: I saw in Rashi this morning on Breishis 37:38, that he does say that Potifar was the head butcher of the King. This would also work with the above-mentioned meaning of the name Potifar. Because "poti" doesn't only mean "stuffed" in the sense of a stuffed turkey. It can also mean "fattened." So Potifar may still be his title, and in this context, it would mean "Fattened cow."

On the other hand, Targum Onkelus on that same pausk says that Potifar was the Executioner. And the reason why Yosef, the wine server, and the bread server would be in Potifar's prison together would be becauwe they were all sentenced to death. So why was Yosef in jail for 9 years and never executed, B"H? The Targum Yonasan says that when Yosef was arrested for trying to be with Potifar's wife, Potifar consulted with the Egyptian priests and they investigated the purported "evidence" against Yosef and found that it was fake. Potifar, therefore, didn't believe Yosef was guilty at all, but had to keep him in prison anyway not to embarrass his wife. But that explains why he was on "death row" without being executed.

The Gur Areye says that Rashi explains that Potifar was the Butcher, rather than the executioner from a Kal Vachomer [a fortiori, for those Latin, non-Hebrew speakers out there :-)]. He says that if Hashem wouldn't let Yosef be exposed to bad smelling spices on the Yishmaeli caravan from Eretz Yisroel to Egypt, how could he expose Yosef to something even more disgusting in Egypt, as being in the house of a killer?! And he says that even according to Onkelus, who says that Potifar was the head of the Execution prison, it was not he who actually killed anyone. He was simply the warden over the prison.

Also, about Osnas, that fat cow (wheat thin) brought up in the comments, The Daas ZEkeinim Mi'baalei Hatosafos brings down tha that Osnas was not actually the daughter of Potifar and his wife. She was just raised by them but she was the child of Dina, the daughter of Yaakov, from her forced encounter with Shchem ben Chamor. How did Yosef know who she was? The DZMBHT says that Yaakov gave her a kemia (necklace w/amulet) indicating that she was a granddaughter of Yaakov, from Dina. When all of the Egyptian girls would watch Yosef and throw their jewelry at him to get his attention (he did not look at them), Osnas had nothing to throw so she threw her amulet at Yosef. Yosef didn't look at the women but he did see the amulet and saw who Osnas really was (his neice from his sister Dina), so he married her. Amazing, eh?

Click here to get Dixie Yid in your e-mail Inbox.
Posted by DixieYid (يهودي جنوبي) at 11:27 AM

Exceptionally interesting and mechudeshdikke, if anything! yasher koach!

Not sure how to take that... Thank you? It's really that mechudeshdikkeh...

If you click on this link and take a quick look at the "Shabbos Day" drasha, there is a mention of one of the names of Yisro explained in the same way. Along the same lines your insight may very well be accurate. Especially considering the nation under discussion, namely, mitzrayim.

this will probably be helpful:

fat cow (It just doesn't feel right calling you that),

Thanks. That is helpful. Much appreciated!

it's also worthwhile to take a look at the explanation of R' Bachya 41:45 on the origins of Osnas, Yosef's wife. The story behind how she got her name is interesting and possibly related.

Check out my updates to the post from this morning's research.

Also, I don't have a Rebbeinu Bachaya. Can you please share with me/us what he says over there?

R' Bachya basically mentions a similar midrash to the one that you found explaining who the parents of Osnat really were. Though the medrash which he quotes also gives an interesting explanation of the name Osnat. Additionally, he quotes a Medrash Rabbah (86:3) that says that the name "Potiphar" comes from his hobby of fattenning cows for avoda zarah ("v'nikra potiphar al shem sh'pitem parim v'agalim l'avoda zarah. v'zehu lashon potiphar - mephatem par.")

Rashbam 41:45 has an interesting comment on the topic as well. Immediately following his interpretation of the name "Tzafnas Poneach", he confirms that minhag mitzrayim was that a person was given a name according to the position that he acquired

S/he of many names,

Thank you! So sounds like a lot of my general theory may be true. The Rashbam though that you mentioned is, I suppose, the main support. Yasher koach!

How does he explain the meaning of the name, "Osnas?" I haven't heard/seen anything about that...?

Following the theory that Osnat was Dina's daughter (Yaakov's granddaughter), the Medrash explains that Yaakov Avinu didn't think it would be appropriate to have her raised in his household. He brought her outside, tied the note around her neck that said where she originated from, and left her under a bush for protection. The medrash says that from her being placed under a bush ("s'neh" - from the story of Moshe Rabbeinu), she had the name Osnat. Although there may still be a few loose ends in this explanation, as they say, "ein meshivin al hadrash".

Interesting! I couldn't figure ou the shoresh of her name. I hadn't made the "sneh" connection. I had read that she was taken, by way of a nes, to Potifar's house. I guess it was hashgacha so that she would be able to marry Yosef. Very difficult to understand medrash though...

Would you happen to know if Osnat is the 1st (only?) case of an adopted child in the Torah?

In Chumash? Bas Paroh, Basya, adopts and raises Moshe, and he is considered a child of hers at least to the extent that the astrologers couldn't tell whether the redeemer was to be born of Egyptian or Jewish parents, which caused Paroh to kill even Egyptian children born on that day.

Why did Yaakov want to abandon his granddaughter to be raised by Egyptians?

That's basically the question that was bothering me in my comment above when i said that it was a difficult to understand medrash. But remember, according to the Midrash, which is where we know about this whole incident to begin with (hapeh she'asar hu hapeh she'hitir you might say by analogy), says that Yaakov didn't abandon them to an Egyptian family. He left her protected under a bush near their home. And a malach miraculously transported her to Potifar's house, where Mrs. Potifar raised her. There still remains some question, but it seems that with her future marriage to Yosef, there was a greater plan involved in having her raised there.