My Kasha on Rebbi Shimon Bar Yochai & Emerging From the Cave 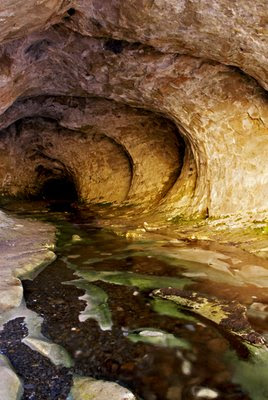 There's something about the story in Shabbos 33b that I couldn't understand. Rebbi Shimon Bar Yochai, the holy Tanna, had to hide in a cave for 12 years so that he would not be killed by the Romans for speaking against them. During that time, he and his son devoted all of their time and kochos hanefesh into learning the deepest secrets of the Torah. So much so, that when he came out after 12 years, he couldn't fathom how regular people could waste their time working instead of learning. The gemara says, "חזו אינשי דקא כרבי וזרעי אמר מניחין חיי עולם ועוסקין בחיי שעה כל מקום שנותנין עיניהן מיד נשרף." They saw people planting and seeding. He said, 'They abandon the eternal world and engage with the transient world?!' Everything they looked at was burned up."

Hashem did not like this so He sent down a heavenly voice to say, "חיזרו למערתכם!" "Return to your cave!" My question is this: The whole source of the problem with the Tzadik's attitude toward Jews' involvement in worldly things was the fact that he was immersed in the holiness of plumming the depths of the secrets of the Torah and learning the secrets of what would become the Zohar Hakadosh, the holy Zohar! And he was in this for so long that he was unable to fathom how anyone could live in anything other than this most exalted state. So why does Hashem tell him to go back into the cave?! This was the very source of the problem to begin with!

I asked this question to my rebbe last Shabbos. As I understand it, this is what he told me, primarily in the name of Reb Simcha Bunim of Peshischa:

Of course it does not bother us that the holy Rebbi Shimon Bar Yochai, at that temporary point in his development, in his first excursion from the cave, did some damage. Because ultimately, without the whole process, Klal Yisroel would never have had the Rebbi Shimon Bar Yochai that we now have. He transformed and deepened our understanding of Hashem, Yiddishkeit, the Universe and everything, B"H! Hakol haya l'tov.

Thank you for the lesson. It is after all an inspiration to remember that even for the great Rashbi, there was "a temporary point in his development." May we each and all merit to rise to madrega for which Hashem has destined us, each and every one in place, and may the year be written and sealed for us for peace, for blessing, for sweetness, and all good things.

Thanks for the ma'areh makom big "E"!

My question is this: The whole source of the problem with the Tzadik's attitude toward Jews' involvement in worldly things was the fact that he was immersed in the holiness of plumming the depths of the secrets of the Torah and learning the secrets of what would become the Zohar Hakadosh, the holy Zohar! And he was in this for so long that he was unable to fathom how anyone could live in anything other than this most exalted state. So why does Hashem tell him to go back into the cave?! This was the very source of the problem to begin with!

The first level is the grub reality. Klipah. The physical world and people’s involvement in it. G-d is concealed, and all one sees is grub nature. Ugh...

The second level is ruchnius: the revelation of Hashem’s light. The upper worlds. The Emes. Geshmak! Obviously, one can’t even compare something like this to the physical world. The only problem is: there is only Light-Without-End. Where is the Luminary-Without-Beginning? It is not to be found in the upper worlds. The Luminary, the Atzmus, is in the physical world, in the Oilam HaSheker! But how do you access it?

The question is: what is something finite? We imagine creation of the finite world as “something-out-of-nothing”. The problem is: there is no such thing as “nothing”. There is always only one thing: G-d. So, to create the world, G-d has to conceal Himself. How do you conceal something infinite? By applying infinite force into the opposite direction! So, the finite of the gashmius is really infinite — just in the opposite direction from the infinite of ruchnius.

And when a Jew does a mitzvah, he unites the two infinites: the infinite of the gashmius and the infinite of the ruchnius (look at the start of David). A Jew creates achdus between two different expressions of Hashem, reaching to the point where all expressions are unified — the Atzmus. Something like that can only be accomplished in the physical world.

This is what yidden in the desert had to realize (and what the Spies didn’t understand); this is also what Rabbi Shimon bar Yochai and his son had to realize — the gashmius is actually higher than ruchnius, because when you perform a mitzvah with it, you unite with the Atzmus, not only Oir Ein Soif. (Incidentally, this is why we hide tzitzis when we go to a cemetery — not to tease the departed souls about not being able to perform mitzvos.)

(star of David, rather)

Thank you for that deep explanation. At first I thought you were giving a different explanation. Then I thought it was just giving a more detailed explanation of the same answer. But now I think that your explanation is different, in that it focuses on the depth within seemingly coarse physicality, whereas R' Simcha Bunim's explanation focused specifically on the gadlus of the Neshoma of a Jew, and what it can accomplish in the physical world. Though in actuality, that sounds related to what you said as well!

It may be of interest that the Zohar, aka the Rashbi's account of the event, said that this occured on Shabbat. Hence the people were mhelal shabbat. The lesson that he failed to learn was Rahamim, and thus had been forbidden access to the Kodesh Kodeshim, Heikal Ahavah. That if he had truly loved his fellow Jew he would have used all that he had gained to instruct him and lead him away from his error, instead of destroying him with heavenly fire. An apt lesson for our generation.

I had never heard that version! That's a totally different and contradictory version of the story. His whole ta'ana was not that they were doing any aveira per se, but rather that they were abandoning ruchniusdik life in favor of mere temporal life.

So according to this explanation that you brought, how was the extra year in the cave able to teach him the Rachamim?