In Defense of Reform Sunday School Education - My Guest Post 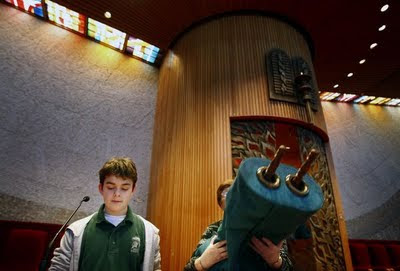 Check out my guest posting at Beyond BT where I posit that, in general, when it comes to who is more likely to become a Baal Teshuva later on, it's better to have a reform sunday school background than no Jewish background at all.

I read Beyond BT’s recent article by Azriela Jaffe, Vaccinating Our Children Against Prayer, with great interest. Based on my own reform sunday school and temple experiences, I also felt that those experiences not only vaccinate Jewish children against prayer, but also against any interest in Judaism in general. My theory was that having no Jewish background, rather than a negative background, gives people more of a blank slate when it comes to approaching Judaism for the first time. I theorized that when these “blank slate Jews” do come into contact with frumkeit for the first time, it will be with a more open mind because they had no preconceived notions based on negative Jewish experiences.

But based on later experiences working with a number of Jewish, not-yet-religious college students, I have come to a different, though not mutually exclusive, conclusion...

Picture courtesy of commercialappeal.com. Click here to get Dixie Yid in your e-mail Inbox or here to subscribe in Google Reader.
Posted by DixieYid (يهودي جنوبي) at 9:53 AM