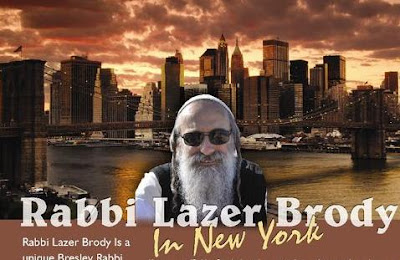 Rabbi Lazer Brody's drasha in the Five Towns last night was a big success. We planned for about 30 people maximum. But there were almost 60 people there. Thanks to Rabbi Brody, several people who helped solicit sponsorships, and well over 20 people who came forward to help sponsor the shiur, and to all the attendees, it was a big success.

It was an eclectic crowd and many people got to speak with Rabbi Brody after the shiur. I received a number of requests to have the shiur recorded from people who knew that they would not be able to make it. Therefore, thanks to Reb Chaim, who recorded the shiur, I would like to present a wav recording of the shiur.

A galach (priest) back in Feudal Europe noticed that while plagues and sickness were afflicting the gentiles in the town, the Jews did not seem to be afflicted by these things. The priest went to the rabbi to ask what the secret was to their immunity from these diseases. The rabbi told him that all Jews keep a mezuzah on their door, and that they are therefore procted from many forms of danger in their homes.

The priest asked if he could buy a mezuzah to put on his door as well. The rabbi responded that it was not one of the mitzvos that a gentile may not perform, so he saw no problem with it and assited the priest in obtaining a mezuzah, which the priest installed on his door.

Soon aftwardward, the town was overrun by cossaks who raided Jewish homes.

But to hear the rest of the story and the punchline, you will have to listen to the shiur. Enjoy!

CLICK HERE to get the shiur by either left clicking to listen to streaming audio or right clicking and selecting "Save Target As" to download the shiur. If it were up to me to title the shiur, I would call it, "Achieving Peace of Mind By Making Peace With Hashem."

Picture courtesy of R. Lazer Brody. Click here to get Dixie Yid in your e-mail Inbox or here to subscribe in Google Reader.
Posted by DixieYid (يهودي جنوبي) at 5:00 AM