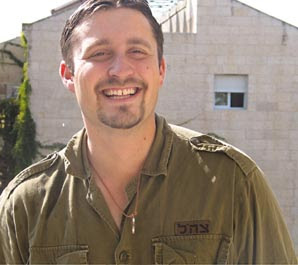 I have heard about an interesting Yid from Dixie named Ari Abramowitz, who was chozer b'teshuva, made Aliya from Houston, TX, served in the Israeli army, and learned in Yeshiva in Israel. He, along with a nice bloke named Jeremy Gimpel, now have a radio show on Israel National Radio. His story is really quite amazing, as you can see from this article from The Jewish Press. After serving in the Israeli army, he sought some safe time by coming back to America for a period of time, at the urging of his parents. Two weeks later, he was stabbed twice in New York City! Needless to say, he's now back in Israel and working on his radio show and other projects.

His show is on Tuesdays at 10 AM Eastern time/5 PM Israel time. You can listen to it on Israel National Radio's website here. You can also listen to archived shows there or at his own site I linked to above.

It's nice to see a son of Dixie who's made good!

Email ThisBlogThis!Share to TwitterShare to FacebookShare to Pinterest
Labels: Dixie on My Mind