Rabbi Akiva Tatz said in his series of shiurim on the 13 Ikkarei HaEmunah that everything that will exist, even after Moshiach comes, exists right now on earth. After all, the pasuk in Koheles 1:9 says "וְאֵין כָּל-חָדָשׁ, תַּחַת הַשָּׁמֶשׁ." "There is nothing new under the sun. He said that it is more difficult to believe in techias Hameisim than the other principals of faith, for many people. This is because, he suggests, ressurection of the dead is just so far out of our experiences in life that it difficult to believe that it's possible. After all, when a person is in the ground, he decomposes and there is no known way to resurrect life from dead tissue that we know of. However, he points out that there is something we can look to in the world today to get a feel for the reality of techias Hameisim.

He points out that when a caterpillar turns into a Chrysalis before becoming a butterfly, it goes through a time where it is literally broken down from being a living functioning caterpillar, into being a globulous ball of mush. After that, the mush is reconstituted into a butterfly before hatching out of the Chrysalis again. He says that just as we cannot fathom how life can be recreated from the former caterpillar which is now a ball of mush, we cannot fathom how life can emerge from a decomposed body in the ground. However, just as there is a natural explanation for what is happening by the Chrysalis that we do not know without studying it, there is also a deeper spiritual reality that causes a dead body to come to life again on a higher level, which we do not, as yet, understand.

Below is a timelapse video about 1:30 long that shows how a caterpillar transforms into a Chrysalis. It is truly amazing and unbelievable.

And below is a video of a Monarch Butterfly emerging from its Chrysalis.

And if you think that Rabbi Tatz is exaggerating when he describes the utter destruction within the chrysalis in the stage between caterpillar pupa and butterfly, then look at this (somewhat disturbing) picture that I found below. 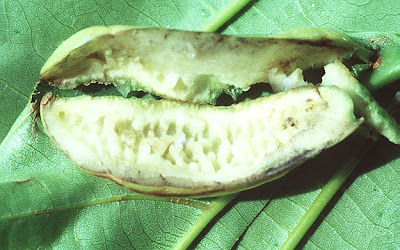 Although I know intellectually there there is still something living in the chrysalis, it is wondrous and amazing that such a thing as this can be turned into a beautiful butterfly. It really puts a person on notice that there is so much that is above our understanding that we should not expect to fully understand how life is created.

When I think of reincarnation I always think of atoms reorganizing. It's not too hard to imagine on that level.

How about a pinecone, or other seeds. They are pretty much lifeless , but add water and you get a plant (this is why, I once heard, that the morid hagashem is located in the bracha of techiyas hameisim)

Nice thought. And great moshol. I guess I have bad associations mentally because they were thrown at me as a child.... Just kidding. Actually, I do have a bad association with comparing pine cones to eternal life because I know that in Catholocism, they are used in that way. In fact, there is the statute of a giant pine cone in the vatican! You can see a picture here:

But in truth, it is a great moshol!

hi!
i love these videos!
years ago, harav zvi tau, one of the former rashey yeshivot of MERKAZ HARAV KOOK in jerushalayim wrote an articel with the same mashal, the articel is printed in his book EMUNAT ETENU 1 and is called "mashal ha'parpar" he explaines there almost the same like rav tatz.
shabbat shalom
f