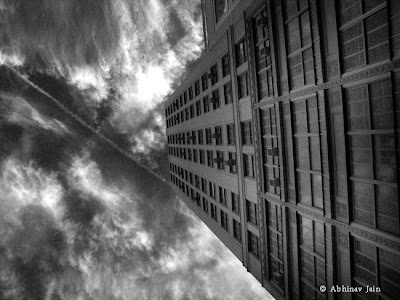 (Guest Post by Rabbi Micha Golshevsky from A Fire in Breslov. He wrote me with 10 ways one can have Torah Nefulah, fallen Torah, through each of the 10 midos/sefiros. This is in response to my post here, where I posed the question to people to point out some practical examples of Torah Nafulah.)

I saw your question regarding toros nefulos and decided to jot down ten ways.

1) Through fallen Chesed. Someone wants an illicit desire so much that he twists his learning so that it is moreh heter to him as in the following story: Rav Huna made a fairly well known statement. One who did a sin and "shanah bah," repeated it, the sin has unfortunately become "k'heter," something that no longer smacks of sin to the sinner himself. The Satamar Rebbe would explain this in a novel way: "There are some people whose lack of yiras shomayim drives them to try and 'purify a sheretz'—to illegitimately rationalize improper behavior. Such people think that they are accomplished scholars, and they are willing to concoct a 'halachic' way permit almost any wrong. Rav Huna means that if one did a sin and knows how to learn (v'shanah), he will find a way to justify his misdeed. Then he can say in all innocence, 'hutra'—it's permitted. His ability to learn is what keeps him sinning!"

2) Through fallen Gevrah: one twists halacha to allow his anger, spite, jealously etc to surface. A story to illistrate: once a chasid was sitting next to a non chasid who was holding the shmiras halashon. The non chasid said, "You are correct but there are five situations when it is permissible to speak lashon hara. If one doesn't work hard on ahavas Yisrael, he will find that he learns these halachos to apply to every person he has an inner (hidden) desire to speak against."

3) Through fallen Tiferes: Learns Torah without ever giving a thought to come to lishmah. This kind of shelo lishmah will never become lishmah. (Chidah Rav Yisrael Salanter etc.)He is not thinking about bringing splendor into the world by yearning for balance and completion through his learning which is the essense of Tiferes.

4) Through fallen Netzach: One who learns or is meiyen in order to defeat another.

5) Through fallen Hode. he learns only to nly about learning for self beautification.For example he learns only to attain a position. If he does not become a dayan he will virtually regret all the work he put into it. (E.g: Why don't I get any respect around here?)

6)Through fallen Yesod: he only learns to give over to others and get honor that way. The moment he no longer needs to give a shiur etc he stops learning. It is only the pleasure of being the big shot that gives this person the impetus to learn.

7) Through fallen Malchus. One who has such low self confidence that he is always sabatoging himself by feeling frozen up and not asking when unsure because of self doubt. This type of false humiilty allows one's Torah to get him no where.

8) All the above leads to fallen Chochmah Binah and Da'as. Rav Nosson explains (in a different context but it seems to me to apply here as well) that at this state one learns only to "attain levels or prophecy" but much like Bila'am one has feels no desire to change. More than that one doesn't even feel a need to change since spirituality for this person is only the "high" of learning and feeling puffed up without any real change. This learning is patently false and the oppositie of Torah for in the Shulchan Aruch we pasken that a Rav without yiras shamayim is like the most ulearned person (k'kal shebitzibur!)

Rav Tzadok Hakohain writes that the seven Shabbosos of nechamah represent the seven lower midos-Sefiros. (Pri Tzaddik parshas Ma'asei #11. The first three are the three haftoros of puranios that just passed.) So one who is willing can work on one aspect per week starting right now!

Of course there are many many levels of all the above and many other ways to get Torah nefulah but that's probably enough for one to work on for now.

Picture courtesy of Abhinav Jain. Click here to get Dixie Yid in your e-mail Inbox.
Posted by DixieYid (يهودي جنوبي) at 10:00 AM

Very insightful! …but of course, Rabbi Golshevsky always is!

Great way to classify Torah Nefulot! I'd also like to add that it seems to me that "Fallen-ness" is a relative term. What represents a fallen level for one person may be still be high above on a very lofty rung for another person. And we each rise up and fall down all the time in our own Torah study/avodah.

I think that posts such as this and it is really very insightful emphasis the need for the study of oneself as well as the studies of the Torah. A person that is constantly doing some sort of self reflection is more able to recognize and release foreign motives from his studies

Here is a relevant source to think about, how it fits to this statement to which it clearly alludes:

Cursed be he who does not hold up the words of this Torah "Is there then a Torah which falls down? Shimon b. Yakin says, that refers to the Cantor (Hazzan), that he stand." (J.T. Sotah 7/4)

This is brought by Ramban to Deuteronomy 26:1-29:8
He writes: "The Cantor. must lift up the Torah before the congregation so that its script can be seen by everyone standing to the right or to the left, and he must revolve the (open Scroll for viewing) in front of him and in back of him; it is a commandment for all the men and women to see the script and to bend their knees, crying out 'This is the Torah which Moses placed before the children of Israel.'"

So Torah nefula may be Torah that falls when we ourselves fail to "stand".

Picture courtesy of who? The photo was taken from my site without my permission. I would at least appreciate the right attribution on it...

Abhi, thanks for the pointer. I got it from the other site on the google image search, which is why I gave attribution to it. They must have copied it. But again, thanks for the correction!

Thank you for making the correction - it's unfortunate that some people feel the need to pass off others' work as their own. Could I request one more minor edit? My last name is actually "Jain", not "Jane". Thanks again for taking the time to correct the attribution.