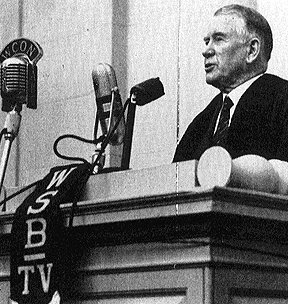 Imagine Dying with the Words "I would rather be a servant in the house of the L-rd." I listened to a report on NPR yesterday which really touched me about Truman's Vice President, Alben Barkley. THIS CLIP (8 minutes) includes the audio leading right up to the moment of his death. I was really affected by it. Here is NPR's blurb about the audio report:

Alben Barkley served in Congress for close to 40 years and was Harry Truman's vice president from 1948-1952.

Although he wanted to be president, Barkley never made it to the pinnacle of power.

Only 14 vice presidents have gone on to the presidency. The majority has, for the most part, lapsed into relative obscurity once their term ended.

Barkley too might have been forgotten except for two things: his nickname and the remarkable circumstance of his death.

I couldn't get the link to open. Maybe it's my computer.

Okay, I changed the link. Let me know how it works.