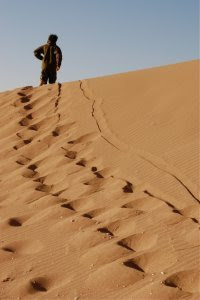 An inheritance hastily taken in the beginning, its end will not be blessed.  (Mishlei 20, 21)

Chazal quote this pasuk about  בני ראובן וגד.  They had come to Moshe, requesting that they receive their portion of land on the other side of the ירדן, which they saw as more suitable pastureland for their abundant livestock.

..they were wealthy, with much livestock and they cherished their money.  And they settled themselves outside of Eretz Yisrael.  Therefore, they were the first ones to be exiled (eight years before the rest of the shvatim).  And why did this happen?  Because they separated themselves from their brothers for the purpose of their wealth.

The tribes of Reuvain and Gad, we are taught, were unduly fixated on materialism.  How did this get expressed?  What are the dangers and pitfalls of this preoccupation?  Here are some interesting points Chazal bring to our attention:

So is the nature of wealth.  It gives haughtiness to its master. An rich simpleton will push himself forward and speak with brazenness.  No one deters him.  He pays no regard to anyone of true stature, because his money raises him up.  (Kli Yakar)

They were concerned more about their money than their children..  Moshe said to them – Not so!עשו עיקר עיקר וטפל טפל !   Make the essential matter your primary concern, and the secondary matter to be of much less of concern.  First build cities for your children, and only then, corrals for your sheep. (Rashi)

Undue preoccupation with material concerns can bring the person to neglect his children.  And by the way, from here we can learn that taking care of our children's needs – spiritual, and also emotional and physical (Build cities for your children, says Moshe Rabbainu) - is prime spirituality.

3.  Detachment from full identity with Am Yisrael and our wondrous destiny –

Even though they had chosen to settle on the other side of the Yarden,  Bnai Reuvain and Gad participated in all the battles to conquer Eretz Yisrael.  Despite this most praiseworthy behavior on their part, the Medrash still says that they "separated themselves from their brothers."  Why is this?

Although the men did go to battle together with the rest of the shvatim, the children remained behind.  Their children did not experience the wondrous miracles which HaKadosh Baruch Hu performed for His nation - the ניסים of the splitting of the ירדן, the supernatural fall of Yericho, the sun stopping in Giv'on, the conquest of the thirty-one kings, and dividing up of the land.  While all these awesome events were taking place before the eyes of כלל ישראל, and were being indelibly etched onto their beings, the children of Shevet Reuvain and Gad were sitting at home.  Something in their chinuch became flawed. These first hand experiences of Emunah and bitachon were replaced by the secure feeling of being surrounded by the  comfort of their wealth.   And this defect got expressed in the fact that they were exiled eight years before the rest of Am Yisrael.

All this resulted from preoccupation with materialism.

אלה מסעי בני ישראל..
These are the journeys of Bnei Yisrael..

The journeys of Am Yisrael in the desert come to teach every Jew about his personal life story; that it is a journey.  It starts out from the moment of birth, which is his own personal yetzi'as mitzrayim.

The entire life story of every person, with all its twists and turns, short stops, longer ones, smoother ones and rougher ones, has meaning.  It is a road with an over-all objective, that is to reach Artzos Hachayim, Eretz Yisrael.  However, there is also meaning and purpose to the road itself.  For every stop on this road, every turn, every single change of scenery has profound meaning, and is tailored to the needs of each person for his distinct task on this earth.

We all go through many different scenarios and terrain in our life journeys.  There are times of uncertainty and turbulence, of ups and of downs, of sudden change;  then there are times of tranquility and security.  The challenge is never to be complacent  and passive, and never to let the situation carry us away.  Life moves on, and we constantly must strive to take the signals, to learn and to grow from the location in which we find ourselves, and to move forward and ahead when the time comes, richer and wiser and stronger from the experience..

The Kli Yakar explains that the former refers to progressive movement, the latter, to regressive movement.  Most of the time, Am Yisrael moved forward, according to the command of Hashem, their backs to mitzrayim and their faces to Eretz Yisrael.  However, the times when they faltered in sin, they traveled backward with their faces turned away,  furthering themselves from the desired objective, and rachmana li'tzlan, looking back to mitzrayim.  This was the direction primarily of the airev rav, the mixed multitudes, whose roots were in mitzrayim.  Am Yisrael, who roots originate in Eretz Yisrael, constantly look to and long for Eretz Yisrael.

So it is in life.

A Jew is called on to be as strong as a cedar and as soft as a reed.
Strong - not to get carried away by the scenery of the moment, but rather to take it all in, in its beauty, its enigmatic turbulence, its wonder, and to respond al pi Hashem, in the manner with which the Torah guides us.
Soft - this is the flexibility required of the Jew, to constantly be ready to change gears, to move on, to move ahead, and not to hang on to old and out-of-place behavior patterns.
This requires gevurah, strength and courage; to step out into terrain that is unfamiliar and unknown. Man naturally seeks the stable and the known. Bitachon , trust in Hashem calls on us to pay very close attention to the subtle signals and to be prepared to reassess our situation as it measures with our value system and our goals, and to have the strength to make the required adjustments, and to progress forward.

The Sefarim Hakedoshim  teach that the sojourns in the desert were for the purpose of birur hanitzotzos, the sifting out and the elevating the "holy sparks".  Also, they discuss how one journey was linked to the next; each new journey drew from all the previous ones.

In life, we are challenged to seek out the nitzozos, the positive meaning, the G-dliness in  every situation.  Thus, when it comes time to move ahead, we do not move on empty-handed.  We take with us from every phase the positive, the constructive,  the meaningful.  Is this not what we are taught about Sara Imeinu, al"h?? Until her last day, she maintained all the beautiful qualities of the diverse and changing chapters in her life!  Avraham Avinu reached his old age bah bayamim, "all his days with him,"  Every day, every circumstance and encounter had a positive value, which he carried on with him in life.

Sometimes we can find ourselves in situations that differ from our desired perception of how they should be, and we wish that it would be different, more to our liking, and we wait impatiently and restlessly for change.  According to what we learn here, there is no such a thing as a vacuum situation in life, or limbo.  There is profound meaning and what to learn and what to take from any set-up in which we find ourselves.

To do otherwise is to respond to life's challenges chas veshalom with the face reverted, towards mitzrayim, in regression.

כה אמר ה' זכרתי לך חסד נעוריך אהבת כלולתיך, לכתך אחרי במדבר בארץ לא זרועה.
"..thus said Hashem, I remember the chesed you did when you were young, your love when you were a bride, when you followed Me in the wilderness, into a barren land."

May Hashem grant us bitachon; and all the necessary resources to make the wilderness in our lives blossom, to reach Eretz Yisrael..

While all these awesome events were taking place before the eyes of כלל ישראל, and were being indelibly etched onto their beings, the children of Shevet Reuvain and Gad were sitting at home. Something in their chinuch became flawed. These first hand experiences of Emunah and bitachon were replaced by the secure feeling of being surrounded by the comfort of their wealth.

So, those who go to a hotel every year for פסח are similar to the בני גד ובני ראובן?? (Duck!)

Perhaps you should duck! Do you remember some of the comments I got when I posted on erev Pesach, "It requires a lot of mesirus nefesh on the part of those who go to hotels for Pesach, in this economic environment, to avoid being moser nefesh.