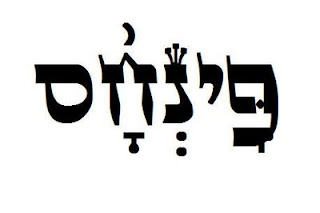 The gemara instructs us: הדבק במדותיו, "cleave in His attributes".

The Baal Shem Tov points out that Chazal do not say hedavek l'midosov, "cleave to His Attributes."

The is is to teach us that we must strive to emulate the inner aspect of Hashem's Midos, rather than the external aspect. For example, if a person is acting only externally with the attribute of chesed, kindness, he is not acting with gevurah, strength. Externally, these two attributes are distinct and are opposites. However, the person who truly seeks to serve Hashem, seeks to cleave to the Inner Vitality of the attributes, for inwardly, there are no divisions (Hashem Echad), and within chesed is included gevurah, and within gevurah is included chesed.

According to this, we cannot define true chesed, kindness, as an act that a person does out of weakness of character (the push-over type), because this act would be devoid of gevurah, strength of character..
Nor can we define gevurah, strength, as an act that is motivated by anger, cruelty, impatience, because this deed would be devoid of love and kindness, detached from the middah of chesed.
This formula of striving to emulate the inner aspect of Hashem's middos is mandatory in order for a person to truly be emulating Hashem's Ways, in order that his deeds be of true kindness and of true strength.

After the damage caused by Bilaam Harasha, when he incited the bnos moav on Am Yisrael, there was great danger pending over Klal Yisrael.
Pinchas, through his act of zeal, by slaying Zimri and Kosbi, caused the nation to have thoughts of Teshuva, repentance. Thus, he atoned for the nation, and saved them from destruction.

Tachas asher kinai l'Ailokov, vayechaper al Bnai Yisrael.
"because he was zealous for his G-d, and he atoned for Bnai Yisrael."

How can we accurately define קנאות, or righteous indignation?

קנאות translates as zealousness. When a person acts with idealism, in a situation where the odds are against him, and he stands no natural chance, he is called a קנאי, a zealot.
The medrash calls Avraham Avinu a קנאי. Avraham Avinu went to fight against the four kings, despite the fact that he was no match at all for them. They had already conquered an alliance of five kings in their quest for power and glory; yet Avraham was ready to fight them with only a handful of men. Avraham Avinu set out for battle, an act of gevurah, to save the world from tyrrany. Avraham Avinu was motivated by his great love for mankind, his chesed.

After Pinchas had slain Zimri and Kosbi, the tribes began mocking him. They accused him of taking after his maternal grandfather, Putiel or Yisro, who had fattened calves for idol worship. In effect, they were declaring that his act of kana'us was motivated by his murderous, angry nature, characteristic of the midianite nation of which he was a descendant.

In truth, Pinchas, like Avraham Avinu, was motivated by great love and compassion. "Pinchas, the son of Elazar the son of Aharon has turned My anger..when he was zealous for My sake AMONG THEM." He took after his grandfather Aharon HaKohain, the great אוהב שלום ואוהב את הבריות , in his deep love for Klal Yisrael. When he was zealous, it was "among them," he did not act out of superiority and disdain, but out of profound concern. Vayefallel Pinchas, Pinchas entreated G-d, saying, "Because of these two (Zimri and Kosbi), twenty-four thousand of Yisrael should fall?!"

It was no enjoyable task that Pinchas took upon himself, contrary to the tribes' claim. According to Rav (Sanhedrin 83a), as soon as Pinchas became aware of what was going on, he ran to Moshe Rabbainu. Did Moshe not teach, when he descended from Har Sinai, that in such a case, the sinner should be struck down by Kana'im?? "Let the one who reads the letter be the agent to carry it out," was Moshe's reply. (Moshe could not explicitly instruct Pinchas to kill Zimri. This is part of the halacha.)

He did carry it out. However, when Pinchas arrived at the scene, he became terrified at the sight of the multitudes gathered around. His soul departed, out of extreme fright. This certainly is not the picture of an angry, murderous character. He then was revived by receiving the souls of Nadav and Avihu, the deceased sons of Aharon, who had lost their lives in an act of great LOVE for Hashem.

In summary, Pinchas's קנאות was rooted in love and concern, not in anger and cruelty.

So here we have a formula for any situation that calls for gevurah on our part. Do we want to have impact on our children, our society? Not with anger. Not with impatience. Not with feelings of superiority. Even if such an approach seems to be a quick-fix solution, it can have no permanent effect. This is because only Kedusha is permanent. And only acts of gevurah b'Kedusha, tempered with chesed have permanence.

Many of our Kehillos today have set themselves up in a very insular manner. Contact with people not sharing the exact same hashkafa is very limited. There is a very strong emphasis on strict and high standards of modest social behavior and dress code. School enrollment is carefully regulated to include only "good families". This insularity is very much a "gevurah" mode. This can be most commendable. We are taught - הן עם לבדד ישכן ובגויים לא יתחשב . Am Yisrael is supposed to stay separate from the goyim and from their ways and influences.

In keeping with the Baal Shem Tov's guiding words of הדבק במדותיו , and his warning to beware of externally acting out the middos, let us check. How is the chesed aspect faring in our kehillos? Is the preoccupation with gevurah leading to feelings of superiority? Self-righteousness? Smugness and complacency? (Racism - in the extreme!) Anger and cruelty? Deep concern for all of Klal Yisrael would get expressed in the way we speak to and interact with others with whom we don't exactly identify. How much we are willing to put ourselves out for others? This would also get expressed in heartfelt tefillos about the physical and spiritual welfare of all of our brethren. כל ישראל ערבים זה לזה. We are responsible for one another.

There is a movement in Eretz Yisrael, leda'avonainu (to our deep regret and heartache), called Chazara b'She'aila. It is comprised of former ba'alei teshuva who have become fiercely anti-irreligious, and are intent on pulling whoever they can back down with them. The person who started this movement was at one time a ba'al teshuva. He was very talented and full of promise. He was treated very roughly and became alienated. I don't know all the details of his case. But I certainly know of many other horror stories of intolerable behavior toward newcomers and others.

Can you explain wh the text onl shows up when ou higlight?

I was wondering what the problem was. Wrong text color for some reason.

Or maybe there was a deeper meaning... Sodos haTorah perhaps?