Am I Wrong to Join the Rat Race? 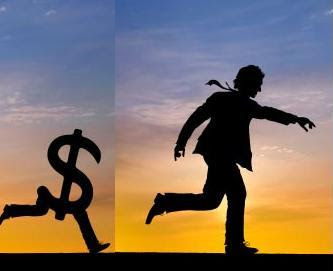 A particular piece from the Me'or Einayim in Parshas Ve'eschanan struck me hard this past Shabbos. This is particularly so because I'm working hard studying for the bar exam now (which I'm taking tomorrow and the next day). The piece also struck me because I'm planning on earning my "gold and silver" working very long hours at the job I'm IY"H starting in November. Here's a summary/translation of the relevant parts from the middle of the first piece in Ve'eschanan:

The root of all of the desires, pleasures, and ways of this world are "gold" and "silver." Money is the means through which one can attain all of the desires and pleasures of this world. But their source in the upper world are Ahava (love of Hashem, in the case of silver) and Yirah (fear of Hashem, in the case of gold). [Reb Nachum then proves this with various verses] Since gold and silver are rooted in Ahavas Hashem and Yiras Hashem, the verse "Mine is the silver and mine is the gold," (Chagai 2:8) applies to it. And "mine = for my sake." Meaning that silver (love, desires) and gold (fear and anxiety) are meant as means to come to love of Hashem and Yiras Hashem.

When man desires gold and silver, runs after it day and night wihtout rest, chases after his livelihood, and amasses wealth, he falls into the trap of the yetzer hara. This in turn results in one being cut off continually from the Creator of the world. This is a trap laid out before all of the living. In fact, most people in the world come to sin by cutting into others' livelihood, hurting others financially, stealing, and the like. Such people do not believe in the fact that everyone has only what Hashem desires them to have and has absolutely nothing from anyone else (Yuma 38b). This is why the 600,000 letters of the Torah (which correspond to the 600,000 souls of the Jewish people) cannot touch one another in a Sefer Torah; because even though the Torah is one unit, each letter (and Jewish soul) is separate and one may not touch that which is designated for another person. (Ibid.)

It is the nature of things on a lower level to run after things on a higher level to be nullified into them and elevated through them. The majority of the world who run after the physical world, and are cut off from Hashem, place themselves on a lower level than the physical things of this world, which are rooted in the highest levels of Ahava and Yirah. Therefore, they run after gold, silver, and livelihood all of the time because those things exist on a higher level than them.

If a person does as he should do, as we mentioned above, the livelihood which is designated to him will run after him so that it can be elevated through him to its root from which it came...

I know that later in the fall, IY"H, I'll be working very long hours. This sounds like I'm falling right into the yetzer hara's trap. On the other hand, since I cannot think of any alternative right now which wouldn't constiute a dereliction of my duties as a husband, father and Jew, how could I not do what I'm planning to do?

I think at my current level of lack of connectedness to Hashem, if I tried to go back to not working too hard, it would not work in any case. My wife pointed out an analogy to what is says in Eruvin 13b, that when one runs after gedula, gedula runs away, but if one runs away from gedula, gedula persues him. She correctly pointed out that when one runs away from greatness, but is looking over his shoulder, hoping greatness will follow, he is still essentially running after it. Here too, if I did not pursue a livelihood fully, hoping that it would chase after me, I would essentially still be running after it and would certainly not merit Shlomo Hamelech's (?) promise!

I'm not sure there are any real answers here. The best I can figure it, if I can remind myself in tiny hisbodedus'n through each day that everything I'm running after are rooted in Elokus and if I ask Hashem constantly to help me elevate the hidden Elokus in everything I'm involved in to its source, then maybe I'll increase my connecttion to Hashem. And if do that, maybe in a few years some non-hishtadlus-intensive parnasa will just come knocking at my door, just begging me to leave the rat race behind and spend a lot more time on Avodas Hashem... Who knows...

Picture courtesy of istockphoto. Please donate to my son's cheder by going to minivanraffle.org to buy a raffle ticket. The drawing for a new minivan, car, or $20,000 cash will be IY"H Chanukah time. $100 for 1 ticket. $360 for 5. Where the form says "Referred by," please write "Dixie Yid." Tizku l'mitzvos! Click here to get Dixie Yid in your e-mail Inbox or here to subscribe in Google Reader.
Posted by DixieYid (يهودي جنوبي) at 6:00 AM

Frum Jews do not "join te rate race",
they "work for chinukh". (If not in chinukh, at least for it.)

Dark humor aside.... My point is, I don't think a career threatens one's deveiqus until one forgets that it's just a means. As long as you stay grounded and remember that your job is just one aspect of building a bayis neeman beYisrael, you should be okay.

-micha
(who writes computer software for a hedge fund)

My dad always said find a job you like and you will never work a day in your life. I sense that you already fear getting taken for a ride on the gravy train. It is sad that the monetary pressures of our society have forced us to abandon our dreams. If the dixie yid from your childhood met the current dixie yid (ala mr. deeds) he would probably kick the current dixie yid in the pants for abandoning his dreams? It's a sad reality we live in perhaps the curse of by the sweat of the brow we must earn our bread. Stay strong and IY"H you will find an avenue in law that speaks to the essence of your soul and develops you as a person and oveid hashem
hatzlacha

Thank you for the chizuk. IY"H, I"ll be zoche to remember that the job is not an ends, but a means. Even though I know this intellectually, real consciousness of that fact is the trick.

I don't really think the problem is that I've "sold out" on my dreams and will be working in a job that I don't enjoy. My problem is more the opposite. I've gotten a taste for the work and I *do* enjoy it. That's what worries me.

I worked at this firm for 10 weeks last summer primarily in the practice area I'll be working in this fall. I got to see what life would be for me in the future and I got to do some of the kinds of work I'll be doing. I don't say that I got a picture of what it'll be like in the fall because of *my* particular experience, which was somewhat storybook-like. Summer Associates are given somewhat of a cushy ride. But I did talk to a lot of associates and heard what they were doing after I left each day, so I'm aware of what I'll be getting into.

Like I said, I actually enjoy the work for the most part. I enjoy the challenges and the little victories in each project. But that's the problem. I'm worried that I'll be so engrossed in the work and the long hours that I won't have the energy for a hisbodedus session before I go to sleep. Or that I'll be focused (which is how I work when I work well) that I won't have the mental space to spend 30 second hisbonenus'n throughout the day reminding myself of the root source and ultimate purpose of the "gold and silver" is.

That's the challenge that I think I have to overcome if I want to accomplish anything in the areas of life that really matter.

Good ideas, Dixieyid. I just finished law school myself. I'll be teaching in a liberal arts college though for the next year, so how many hours I put in will be technically up to me (though I'm sure I'll have to work hard).

Of course it's best to work fewer hours. Aside from Torah study/spirituality concerns, long hours put so much strain on families, and people's physical and emotional health. Some professions make balance difficult. Law is known for long hours, but there is in reality much more flexibility than in other fields, like medicine (where residents tend to work 80-100 hours for years, and then work nearly that much for the rest of their careers).

Most government lawyers work 40 hour weeks. Many solo practitioners work long hours, but it is possible to limit one's hours by taking fewer clients and working mainly in certain practice areas, and by keeping expenses low by sharing office space or working at home. There is a growing number of people working as freelance lawyers (not just "contract attorneys" who are paid little and often work bad hours). Some have managed to make a good living doing this, and many are happy with the flexibility. They have a professional association and some blogs. Of course, the income is less predictable.

It is also possible to ask a full-time employer to cut down on hours. This seems ludicrous but it has been done. The book the The 4 Hour Workweek has a whole system for doing this (as one of its methods for working less). Not sure how it would apply to law, but the book has inspired many people to find ways to work less while still making a decent (sometimes increased) income.

In time I'm sure you will find the right balance! Kol tuv!

then perhaps your avodah is not doing the avodah.
I'm sure you know the maaseh of reb zushah and reb meilech stuck in a prison cell with a foul smelling toilet in the center. Reb Elimelech was very pained that he had not davened mincha yet and would miss the zman because of the tzoah in their cell. Reb Zusha told him don't be pained sometimes the avodah is not to do the avodah. He thought for a minute and then they began to sing and dance around the toilet. At that point one of the guards was passing by and saw them rejoicing he asked another inmate why they were so happy and he pointed to the bucket. at that point the guard removed the bucket and he was able to daven. Not sure if the bucket is law for you cause you like it yet you say it is may prevent your avodah and you are worried about that. Perhaps you need to embrace not doing the avodah which at which point hashem may or may not decide you have gotten the point? not sure been struggling with this story and your situation myself for a bit now...

Just hang in there. These issues have way of working themselves out!

Ultimately it is all a matter of perspective.