How Much Time Daily Should I Spend on My Purpose in Life? 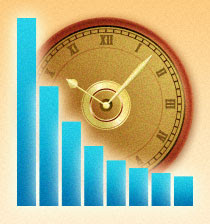 I recently received the e-mail below from a friend, asking for my thoughts on how he should allocate his time for a certain aspect of what he feels is perhaps his "life's work," the reason why he was placed on this earth. If you can, think about his question and my response to him. Perhaps you would have answered differently. Is there anything you would like to add? How do you approach the issue in your own life? Here's his question:

Recently I have been giving a lot of thought to whether I am spending enough time each day working on [a certain] project. On one hand, I am working on it at least 30 minutes a day/5 days a week. However, on the other hand, if this project is one of the reasons Hashem put me on the earth, then 30 minutes is certainly not enough.

And here was my response:

I don't know know if there's any connection between the thoughts that if something is one of the reasons one is created that one necessarily has to spend more than half an hour a day on that thing. Is it ratzon Hashem for you to spend more than 1/2 an hour a day on it? Well that would depend. What are the alternatives? If you did spend more time, would you not have enough time to be ma'avir sedra or to learn Gemara or halacha or whatever your other sedorim are? If spending more time on it would mean doing something that you have reason to believe is against ratzon Hashem, then that would imply that spending "only" 1/2 an hour a day on your project is ratzon Hashem.

And also, what do you mean by saying that the project is "one of the reasons why Hashem put you on earth?" If you mean that on its literal level (that it is one of many reasons why Hashem created you), then what about the example of politely smiling and thanking the check-out person at the grocery store? If it's ratzon Hashem for you to do that at the moment you finish your transaction with her, then that too is "one of the reasons Hashem put you on earth." Does that mean that you should davka spend more than 1/2 an hour smiling at check out girls? Obviously not.

For your project, my personal opinion on how to "divine" what the amount of time is that Hashem wants you to spend on it is: See how much time you have after all of the other things you have to do. And then ask yourself where you would get the time from if you increased how much time you spent on it. (e.g., some other learning seder, sleep time, family time, work time...) Then ask yourself whether, in the aggregate, you'd be failing to fulfill what Hashem wants of you in those other areas of life. If so, then perhaps 1/2 an hour a day *is* what Hashem wants from you. If not, then you know you should increase the time since it sounds like you feel a pull to increase the time.

Picture courtesy of espire.net. Click here to get Dixie Yid in your e-mail Inbox or here to subscribe in Google Reader.
Posted by DixieYid (يهودي جنوبي) at 2:06 PM

While reading this, I am reminded of a famous saying of R Yisrael Salanter. Someone approached him saying that he "just doesn't have time in the day to learn".

R Yisrael replied that this person should start learning mussar and he would realized that he has more time than he thought he had to learn Torah.

Rav Dessler use to tell his talmidim to keep a notebook and write down how many minutes during the day that they learned. This was b/c if you visually see how you use your time, you realize that there's always more time. (as personally heard from a student of Rav Dessler)