Also courtesy of Reb Adam Friedman, here is the Torah from the Bas Ayin Rav Moshe Weinberger taught at Shalosh Sheudos during his visit to YU this past Shabbos, parshas Vayeshev. Learn through that first. Rav Weinberger then told over a story about Reb Mendel Vizhnitzer (The Tzemach Tzaddik), which Reb Adam summarized as follows:


He then told the story of the Tzemach Tzaddik, Reb Mendel Vizhnitzer and little Rivkah. He heard it from his father when he was younger. Before he became Rebba, he wanted to take the pulse of the people. He dressed up as a begger and went traveling around year after year. Every year he would arrive in a ceratin town and the people would give him a few koppecks but no one invited him in. There was a little girl, Rivkahleh, who year after year, would set up her little table and chiar and serve Mendel "the meshugeneh" tea. Rivkah and Mendel became friends. During his last visit - he knew he would have to reveal himself and become Rebba soon - he said to Rivka that this would be the last time he would be here. He asked her not to forget him and she asked the same.

Fast forward, Rivkah became very sick and lost the ability to walk. Her parents went to every doctor, travelled to Vienna and Prague, but to no avail. Rivkah suggested that they go get a bracha from the Tzemach Tzaddik because maybe he is Mendel the begger, who used to travel around. The family thought she was speaking crazily due to sickness, but had exhausted all options. During the day before the family arrived, the Rebba made a starnge request of his gabbai. He asked him to find a toy set of table and chairs and a little tea set. The gabbai found one and set it up in the corner of the Beis Medrish, at the Rebba's request.

The family arrived and carried Rivkah in to see the Rebba. They placed her in front of the Rebba in the middle of the Beis Medrish, she was laying on the floor. When Rivkah saw the Rebba she yelled "Mendel!" The chassidim looked around "Mendel?" Who is this woman? Rivkah continued and said, do you remember me? Reb Mendel turned to Rivkah and said, Rivkah, do I remember you? When no one else took me in, you brought me to your table and served me tea. I would like you to serve me tea once more. At that moment Rivkah stood up and walked over to the tea set.

IY"H, may we be zoche to see the faces of our own true selves, the faces of the tzadikim, and the face of Moshiach, may he come soon in our days!

The Rashbam on Bereishis 37:36 says that M'dan, Midyan, and Yishmael are all brothers from Avraham, though they do not share the same mother according to the Rashbam (Bereishis 25:1). The Rashbam also solves the difficulty of the numerous nations the psukim say bought/sold/transported Yosef by stating, on the next phrase in the Rashbam, that M'dan and Yishmael are one and are referred to interchangeably in the psukim. So according to him, we're really only dealing with two distinct groups: Midyan and M'dan/Yishmael.

The video above is the newest Maccabeats Chanukah video to raise funds for the Miracle Match bone marrow donation organization. Love those "Greek" guys' cameos every year. They even give a hat tip to the fact that Thanksgiving falls on Chanukah this year (eye roll). ;-) And l'hashlamas hainyan, enjoy two other classic Maccabeats Chanukah videos below (wish I could show you our video of our son spontaneously singing Candlelight at his sister's bas mitzva when he was about 5 - sooo cute):﻿

This is my favorite song from my trip to Uman this year. So happy to see that it's online. Hashem Melech Hashem Malach Hashem Yimloch l'olam va'ed! My wife helped me understand the French parts. :-)

I enjoyed reading Reb Hirschel Tzig's recent post at Circus Tent about the inspiring Rosh Chodesh Kislev farbrengen held by Rav Weinberger at YU but I was dismayed by the smallness, disrespect, and ignorance displayed in many of the comments. I know it's the Internet and many comment sections in the world are populated by such commenters, but I was unable to forget about these comments without putting a response "on the record." For the sake of the majority of readers there who did not comment, and perhaps against my better judgment, I offered to write a response to the majority of Circus Tent readers who may not be aware of the ignorance of many of the commenters. Baruch Hashem, Hirshel Tzig was gracious enough to accept my offer.

Please see below for the introductory comments at the beginning of my guest post or you can click here to read the full post. I encourage my Dixie Yid readers to contribute voices of reasonableness and sanity to the comment section there and I discourage people from making disparaging or insulting comments in response to any small-minded comments you read. I don't think anything is gained by sinking to the lowest common denominator of the Internet comment world.

Here are the first few paragraphs of the guest post:


First of all, thank you to Reb Hirshel Tzig for publishing this guest post so that I can share some information and thoughts about my rebbe, Rav Moshe Weinberger, shlita, who I see as one of the greatest mashpi'im in our generation. I do this with the recognition that although it is absurd for an ant like myself to "explain" Rav Weinberger to those who are not yet familiar with him, the comment section of Reb Hirschel Tzig's recent post about the inspiring Rosh Chodesh Kislev farbrengen held at YU convinced me that many Circus Tent readers may benefit from some additional insight into this very special Rav.

My biggest hurdle is, as Rav Weinberger said about Rav Kalonymous Kalmish Shapira, Hy"d, the "Aish Kodesh," at that tzadik's hilula a few years ago, is "For those who are not yet familiar with his teachings, how does one explain that this [is] not 'just another rabbi?'" The only way for readers to truly get a sense of why Rav Weinberger's teachings are so vital for our generation is by listening to at least one series of his shiurim. I recommend starting with one of the series of shiurim on the teachings of the Baal Hatanya, Bilvavi Mishkan Evneh, or Rav Kook. You can also read some of  his recent Shabbos morning drashos on my blog here. Nevertheless, I will try to hit a few roshei perkaim and point those interested in learning more toward some helpful sources.

In terms of format, I will address the topic by responding to many of the misimpressions expressed in certain of the comments to Reb Hirshel Tzig's post according to the categories listed below. In doing so, I am intentionally looking past the profound bizui talmidei chachamim, smallness, and ignorance in which many commenters enclothed their "analysis." I'm also numbering the paragraphs so I can refer to the paragraphs in this guest post if a comment raises a point or points I've already addressed here either explicitly or implicitly. Life is short. Here are the general types of comments/"complaints" organized by category: 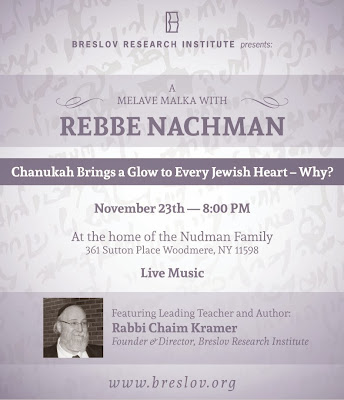 Breslov Research Institute is havintg a Melaveh Malka and the home of Dr. Nudman, my friend, and writer of the Rav Weinberger Shalosh Sheudos drashos. Rabbi Kramer has put out so many books on Breslov chassidus and I was fortunate to daven and learn by him in Uman this Rosh Hashana.

The Melaveh Malka is next motzoi Shabbos (Nov. 14th) at 8:00 p.m. at the Nudman's home. The address is on the flyer on the right. There will be live music (I'm not sure by who!) and it's definitely a worthwhile organization to support! Rabbi Kramer will speak on "Chanukah Brings a Glow to Every jewish Heart - Why?"

See above for a beautiful video showing how students from Yeshiva High School in Atlanta nominated Rabbi Doniel Estreicher, who learned in Telse, out of their great love for him. B"H, I was zoche to meet Rabbi E a few times and stay with him for Shabbos eighteen or nineteen years ago when I lived back in Dixie. HT Jew in the City.
Musical duo Evan and Jaron who attended Yeshiva Atlanta and were students of Rabbi E years ago also wrote a song honoring him called "He Shines" (lyrics here). A video of two guys singing that is below:

Click here to get Dixie Yid in your e-mail Inbox or here to "follow" me on Twitter.
Posted by DixieYid (يهودي جنوبي) at 11:30 AM No comments: