A Shpoler Zaide ma'aseh and the deeper meanings of minhagim 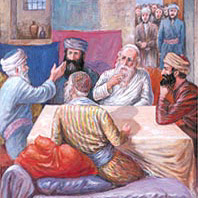 I saw the following ma'aseh in Sipurei Chassidim by Rabbi Shlomo Yosef Zevin. It really struck me because shortly after I read it, I came home from the seder on the second night of Pesach and my 4 year old daughter did exaclty what was talked about in this ma'aseh with the Shpoler Zayde.

For time immemorial, there has been a minhag that Melamdim would teach the children a peirush to say on each part of the Hagada (Kadesh, Urchatz, etc) as they announced each section. For Kadesh, the children would say, "When the father comes home from Shul on the night of Pesach, he needs to make Kiddush right away so that they children don't fall asleep."

One time at the seder of the Shpoler Zaide, his son made that declaration at Kadeish, but left out the explanation, "so that the children won't fall asleep." His father asked him why he left out the last part. And he answered that his rebbe didn't teach that part. So the Shpoler Zeide taught his son that part.

Unfortunately for the melamed, he was one of the guests at the Shpoler Zaide's meal the following afternoon. The Zaide asked him why he doesn't teach that part, as it's always been taught. The melamed answered him that it didn't seem like such a good reason for making kiddush right away, because the din of making kiddush quickly after ariving back at home applies even when there are no children in the house. Therefore, he decided not to teach the children that explanation.

The Shpoler Zaide got very angry and rebuked the melamed for his arrogance at fooling with ancient minhagim, and for thinking that he was smarter than all of the other melamdim through the generations. There are much deeper meanings to this minhag than you have known about.

The rebbe then proceeded to explain the deeper meaning of why our forefathers instituted that introduction that the children say into the seder: In the Zohar on Parshas Emor (Page 95a) it states that Rebbi Chiya opened wit h the pasuk from Shir Hashirim 5:2 "אֲנִי יְשֵׁנָה, וְלִבִּי עֵר," "I am sleeping but my heart is awake." The Jewish people say, "I am sleeping in my exile." The Shpoler Zaide continued that this Zohar teaches that while the Jewish people are in exile, they are in a state of sleep and a lack of tranquil thinking (histalkus hamochin) because galus brings with it all kinds of pressures, persecutions, poverties, and expulsions. Therefore, our fathers instituted that the children open up the seder and introduce it just like Rebbi Chiya's introduction in the Zohar. And the meaning is like this: When the children say "When father comes home from Shul," it means that when our Father in Shamayim returns after Maariv Pesach night from Shul back to Shamayim and he has just seen that even though every Jew is tired and worn from the pressures of life in galus, from work, and from the labor of preparing for Pesach, nevertheless, when they are in Shul they daven Ma'ariv, they say Halel with fiery enthusiasm, and they pour out their hearts before Hashem in tefillah, each one according to his level, then; "He needs to make kiddush right away," meaning: He must immediately renew his Kiddushin (marriage) with the Jewish people (like the pasuk in Hoshea 2:21, "וְאֵרַשְׂתִּיךְ לִי, לְעוֹלָם," I will betrothe you to Me..." This is "in order that the children not fall asleep," meaning: that he should redeem us from galus so that His children, the Jewish people, not fall asleep, G-d forbid, in the deep sleep of the exile and give up hope from ever being redeemed.

When the Shpoler Zayde finished this explanation, he cried out, "Abba, our Father in Heaven! Redeem us quickly from our exile! Just a little bit longer and it will no longer be, "I am asleep but my heart is awake," but we will completely fall asleep in this Galus, Chalila!"

I was really taken with this ma'aseh when I read it, so later on when my 4 year old ran over to me as I walked into the house for the second seder and said, "Daddy, take off your coat and make kiddish, so the children don't fall asleep!" I was so impressed. I guess they really do still teach that traditional explanation of Kadeish for the children to say at the Seder!

just wanted to point out that i think you made a slight error, unless the deeper meaning escapes me..

The other ["dotless"] yitz here. Dix, looks like you flubbed this twice, also when you quoted the verse the first time, right next to the Hebrew. Please correct!
Best regards...

Thank you very much. I made the correction. That's what happens when you try writing something at 1 AM!

I love the deeper layers of meaning that were explained here! Even a small child's "line" is invested with so much hidden content.

While you're making corrections, shouldn't "give up home" be "give up hope" at the end of the 3rd paragraph from the end?

Thank you for what you said. I think that's one of the reasons I liked the story so much. It shows us how even simple minhagim which seem to have only a basic meaning, are really very deep.

And thank you for the correction. I changed it. I really have to be more careful in the future, especially when foolishly staying up late to create a post that I really wanted to share. Thank you!