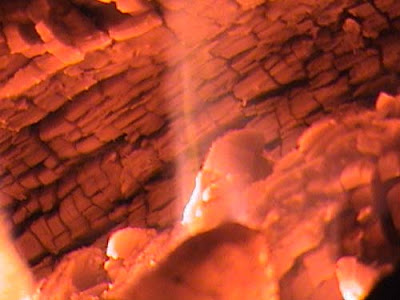 Here's another amazing ma'aseh regarding the holiness of how one must prepare for Shabbos on Erev Shabbos, and do teshuva like it was Erev Yom Kippur. I heard this from my rebbe.

The Noam Elimelch answered him that, "It is not that I am greater than you. That, of course is not the reason. Rather, it is because every Erev Shabbos in my house, it was like Erev Yom Kippur."

There is another story that comes from the Rebbe from Djikov. He was once in a certain city and heard that there was an old man there that worked as a young boy in the house of R' Elimelech. This man was very sick, and barely conscious and always layed down in bed. However, when he heard the Rebbe from Djikov say the name of Reb Elimelech and asked him what he remembered from the house, the man actually sat up in bed, trembling with fear. Tears poured down his face and he said:

"When I worked there, I remember that there were miracles happening from morning until evening every single day. But because I am old I do not remember any of these. What I do remember is that every Erev Shabbos, the Rebbe would come home from the Mikvah, and roll up his sleeves. He then proceeded, every single week, to place both of his arms into the fire and into the coals of the fire up to the elbow, sifting through the fiery coals. There were sparks and flames flying to the right and to the left. Yet he would not be burnt at all. And he would scream and cry at the top of his lungs so that everyone in the house and in the courtyard could hear, 'Meilech! Meilech! You're such a Rasha, even the flames run away from you! They want to stay so far away from you, they don't want to even burn you, Rasha!'

(Aparantly, as a young boy, he had once struck his mother and ever since then he dipped into the mikva of fire and the mikva of water, trying to cleanse himself of that and other aveiros.)

Watching and experiencing this sight every Erev Shabbos, the whole house was filled with fear and trembling and everyone did Teshuva. They all, from the simplest Jewish housekeeper in the house, begged and pleaded with each other to be forgiven for anything that they had done. But the minute that the Rebbetzin lit the Shabbos candles, the whole house was filled with joy from the beginning until the end of Shabbos."

Now, none of us will be placing our hands in fire or performing miracles. However, instead of just running around taking care of the errands of Erev Shabbos, we can make an effort to have a little bit more fear and eager anticipation that Shabbos is coming, and we can do teshuva, lest we come into the holy Shabbos with unclean hands. IY"H by us!

Click here to get Dixie Yid in your e-mail Inbox.
Posted by DixieYid (يهودي جنوبي) at 8:52 AM

Thanks for posting notes from the shiur, as we discussed last week. Awesome.

One thing though I'm positive about-there's no way that he literally put his arms in fire. He may have put them close to the fire. . .but not in a way that he could have become burned. It'd be against halacha to put his hands in fire. Plus, ein somchin al hanes.

The story is that he literally did put his hands in the fire. Someone like Reb Elimelech isn't like everyone else.

Also, he wasn't someich on the nes. He WANTED to be burnt as the story explained and he was upset that he wasn't. You and I aren't on the level where we should be seeking yissurim, self-mortification, but Reb Mailech was and he did many other things to himself as well, according to the sefer Asara Tzachtzachos.

He may have really done this but the standard disclaimer applies; "Kids, don't try this at home."

just curious you say you heard this from your rebbe. who is your rebbe?

The Satmar Rebbe said anyone who believes all chassidishe maasos is a fool.

The point of many of these maasos, like many midrashim, is the point, the lesson, but they are not meant literally.

You are right in a general way, but the truth is more complicated than you make it out to be.

The gemara says that the Chassidim Harishonim would perform self-mortification by rolling around in the snow (frostbite, anyone?). There were stories that R' Yisroel Rizhiner, who dressed and conducted himself in a royal, opulent manner, kept broken glass in his shoes, so that his conduct would only be L'ma'an Shmo and not for the purpose of kavod or ta'anug.

Chavala b'atzmo is a relative term dependant on many factors. Not a simple bright-line rule, as you seem to think. Women pierce their ears. In ancient times, they used to pierce their noses and other parts of their bodies as well. Doctors perform chabal on people every single day. Similar to Tza'ar baalei chaim, whether or not chabala is asur takes into account a balancing test for why it's being done, whether there's a tzorech, a need to do so. And whether that need or purpose counterbalances the chabalah. It is not a clear-cut rule as you might have thought.

I'm sure the tikunim that he and other great Tzadikim on his level were accomplishing far outweighed the factors mitigating against chabala.

The focus is on the word "all" and on the fact that one takes the point from the story, which is why I ended the post the way I did, focusing on practical application.

If you want to leave a thoughtful, respectful comment, we would love to hear from you after you cool off.

I strongly believe that the Satmar Rebbe would say that anyone who believes this Reb Mailach maaseh as literal is a fool. . . .Putting hands into fire is most def. a mashal.

Visitors- Let's all be careful not to be putting our tongues (or finger-tips) in the perverbial fire here, chevra.

Strong suspicion that anon 2:31 is dixieyid himself. . .

I still love you anyway.

Putting hands in fire is not like snow anyway, since the way you describe, his hands would most def. be damaged permenantly,-he then couldn't perfrom many mitzvos that require hands

We're beating this to death but the point is clear-it's not literal!

My question for y'all is this:

But if that's so, why are y'all so hung up on proving whether or not it happened??? The fact that you are indicates that you are more focused on whether or not the story historically happened, rather than the story's message about making Erev Shabbos a very holy time, and not a throwaway time that's just used to get things done.

Whether or not it did literally happen is not the point anyway. We can all agree on that, right?

You're correct-the point is the point of the story.

We're hung up on this bec. you were so adamant that it was literal. Plus, believing this kind of story as literal can create people who believe that a fish talked in New Square. . .and, dare I say, that a man walked on water, etc.

you might be suprised to know,that the satmar rebbi zzl'absolutely did not believe in these childish rebbishe hokus pokus story's,there is a famous vort from him,which he said it in tongue in cheek,that the reason why chasidim say over rebbishe,miracle story's on motzei shabbos,because the talmud says that even an am haaretz,does not say lies on shabbos,therefore all shabbos long he had to keep all his lies inside himself,well comes motzei shabbos he packs it all out.
i grew up in satmar,and was pretty close to the rebbi z't'l.and remmember him numerous times,whenever someone told over one of these rebbishe stories,he absolutely made fun off it,and insisted that only a fool would belive it

Which Satmar Rebbe did you grow up with? The Divrei Yoel or the Berach Moshe Z'TL?

Rabbi Newman, I hear the point you're making. To me personally it is not ma'aleh or morid to be chokeir about whether or not the story hisorically happened though.

I stuck with seeing it as actually having happened because that's the way I heard it over. But that whole issue isn't that important to me. The first comment and many others out of the box were about the historiocity. That says to me that there's more of a hang up about whether something actually happened than an attitude of just skipping over that issue to the *main* issue which is the point of the story, which we both agree on.

Harry, thanks for making your point the way you did this time around. I appreciate your point and I definitely appreciate any stories I can get my hands on about the Satmar Rov's famous sharp wit. However, I'm more from the tradition that "anyone who believes all of these stories is a fool and anyone who denies all of them is a kofer."