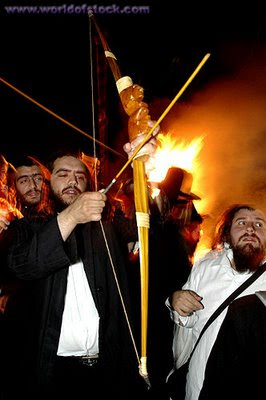 Tomorrow, 19 Iyar, is the 120th birthday of the Holy Piaseczner, Rebbe Kalonymos Kalmish HYD. He was connected with every fiber of his being to the holy Zohar of Rebbe Shimon Bar Yochai and viewed the Zohar HaKadosh as the Sefira of Keter Elyon, which was completed when unified with the Chassidic teachings of the Holy Besht, representing the Sefira of Malchut.
May the merit of Rebbe Shimon, the Besht and Rebbe Kalonymos protect Am Yisrael and bring the final Geula! Chag Sameach, Rav Zvi

The Kabala, of which Rebbe Shimon Bar Yochai's (who's Yartzeit we commemorate on Lag B'Omer) holy Zohar, is the preeminent work, is often referred to as Penimiut HaTora, the Inner Dimension of the Tora. Others refer to it as the hidden light of the Tora. Many years ago Rav Yehoshua Reich shlita pointed out to me that even in the realm of Halacha Rebbe Shimon focuses on the inner dimension, since he poskins in Hilchot Shabbat[1] (and his positions are accepted) the principles of dvar sh'aino mitkavein mutar[2], and melacha sh'aino tzricha l'gufa patur[3], positions that essentially define physical actions, with their resultant Halachic consequences, according to the person's inner intention. Thus two people could perform the same act on Shabbat and be judged completely differently depending upon their thoughts at the time.

The [4]story of Rebbe Shimon's hiding in the cave from the Romans begins with a disagreement between him and Rebbe Yehuda. Rebbe Yehuda praises the Romans for building great markets, bridges and bathhouses. Rebbe Shimon retorts that all of these were built for the purpose of serving the Romans' evil intentions, prostitution, taxation and the worship of the body. After this Rebbe Shimon was sentenced to death and fled to the cave. We can see clearly that Rebbe Yehuda focuses upon the external physical reality whereas Rebbe Shimon defines these things based upon the internal intension.

Check and see, in the principles of Hilchot Shabbat mentioned above, in which Rebbe Shimon defines the action based upon their internal intentions, his opponent, who defines them based upon the external physical reality, is none other than Rebbe Yehuda.

May Rebbe Shimon's merit protect all of Am Yisrael.
Lag B'Omer sameach!
[1] Interestingly, the Zohar refers to Rebbe Shimon as "Shabbat" and the Karliner Rebbe would say "Gut Shabbos" in Meron, even during the week! See the Netivot Shalom on Lag B'Omer.
[2] Baitza 23a.
[3] Shabbat 121b.
[4] Shabbat 33b[!].

Picture courtesy of worldofstock.com. Click here to get Dixie Yid in your e-mail Inbox or here to subscribe in Google Reader.
Posted by DixieYid (يهودي جنوبي) at 5:59 AM

nice piece.
a minor correction unless it is from another source to note 1. The Nesivos Shalom said that the Slonimer Rebbe (Beis Avraham), not the Karliner Rebbe said gut Shabbos.