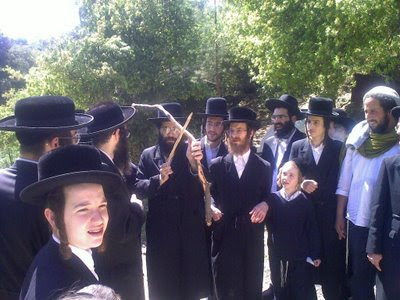 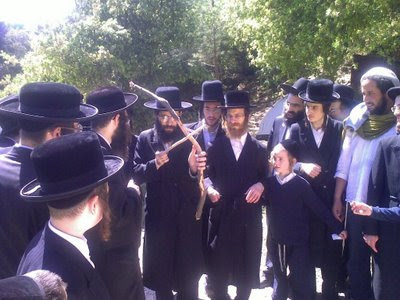 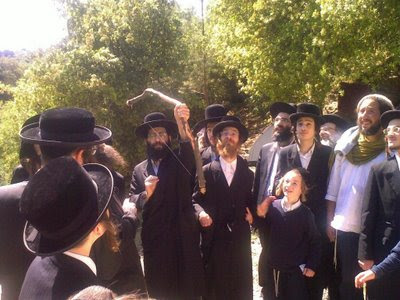 If Reb Tzvi Mayer went out of his way to shoot a home-made bow and arrow on Lag B'Omer, there must be something very deep to that. I know there's a minhag that kids are given and play with them on Lag B'Omer, but there must be something very deep to it. Does anyone know what this would be about it on a deeper level that Reb Tzvi Mayer made an avodah of going to do it?

Click here to get Dixie Yid in your e-mail Inbox or here to subscribe in Google Reader.
Posted by DixieYid (يهودي جنوبي) at 6:01 AM

Reb Mendel Rimanover says we use a bow and arrow on Lag BaOmer because there were no rainbows seen during the lifetime of Rashbi. They are both called keshes. HaKeSheT is gematria Raban Shimon bar Yochai (I think Bnei Yisaschor says this)

Reb Nachman of Breslov says a segula for one to have a boy is to shoot a bow and arrow on Lag BaOmer. (Sefer HaMidos) This is alluded from a posuk in Divrei HaYomim 1 8:40 וַיִּהְיוּ בְנֵי-אוּלָם אֲנָשִׁים גִּבּוֹרֵי-חַיִל דֹּרְכֵי קֶשֶׁת וּמַרְבִּים בָּנִים וּבְנֵי בָנִים And the sons of Ulam were mighty men of valor, shooters of bows (archers), and had many sons, and sons' sons. (Tcheriner Rov)

The seforim hakedoshim give these and other reasons for using the bow and arrow. This is reason enough for Rav Tzvi Meir to use a bow and arrow. If the seforim write its a minhag then one should be doing it. These are deep enough reasons. Perhaps he was also helping bring a yeshua for people in need of children.

Thanks for your answer, A Talmid!

קשת-שומע קול תפילתינו
Also time is a גלגל half of sefirah is half of a circle hence גל flip it is Lag so we take half a גלגל meaning an arow and shoot it.והמסקיל יבין

meaning an arow-I meant a Bow

I was familiar with some of those reasons but I appreciate the explanation for why it would be a reason even for a big Tzadik to do it.

thank you for that one as well. Those are great Roshei Teivos!

Why shouldn't a tzadik do a minhag yisroel. Minhag ysroel Torah hi. If the Bnei Yisaschar wrote about it, its not good enough for him? This shows the emunas tzadikim of Rav Tzvi Meir. To him, its not just a nice pshetel on why we use bows on Lag Baomer. Rather, the words of the tzadikim on "any small" minhag are important.

I thought it was a minhag to play baseball and basketball with ones' Rebbeim...
lol

In truth, taking the talmid/rebbe relationship outside of the classroom is probably very much in line with the Rashbi's life post-cave...applied Torah.

Lag BaOmer, the 33rd day of the Omer Count that connects Passover to Shavuot, is the birthday of Jewish mysticism.

For many generations, the inner soul of Torah -- also known as the "Kabbalah" -- was transmitted from teacher to disciple in the form of cryptic maxims, in private, and only to a very few individuals in each generation. These teachings chart the sublime expanses of the divine reality, the processes of creation, G-d's relationship to our existence and the inner recesses of the human soul. The tremendous power they contain, and their extreme subtlety, makes them extremely vulnerable to corruption. Thus, for many years it was forbidden to reveal these teachings.

The first to disseminate the teachings of Kabbalah to a wider group of disciples was Rabbi Shimon bar Yochai, who lived in the 2nd century CE. The most significant revelation came about on the day of Rabbi Shimon's passing, on which he expounded for many hours on the most intimate secrets of the divine wisdom. That day was Lag BaOmer.

Centuries were to pass before the great Kabbalist Rabbi Isaac Luria (the "Holy Ari", 1534-1572) would proclaim, "In these times, we are allowed and duty-bound to reveal this wisdom," and Rabbi Israel Baal Shem Tov (1698-1760) and his disciples were to make them accessible to all via the teachings of Chassidism. But Lag BaOmer remains the day on which "Jewish mysticism" made its first emergence from the womb of secrecy and exclusivity. Rabbi Shimon bar Yochai instructed his disciples to celebrate this day as a joyous festival -- and so it is marked in every Jewish community to this day.

One of the ways in which we celebrate Lag BaOmer is by taking children out to parks and fields to play with bows and arrows. The Lubavitcher Rebbe explains that the bow-and-arrow symbolizes the power of inwardness -- the power unleashed by the mystic soul of Torah.

The first weapons devised by man were designed for hand-to-hand combat. But a person's enemy or prey is not always an arm's-length away, or even within sight. Soon the warrior and hunter felt the need for a weapon that could reach a target a great distance away, or which lies invisible and protected behind barriers of every sort.

With a bow and arrow, the tension in an arched bough of wood is exploited to propel a missile for great distances and slash through barriers. The inventor of this device first had to grasp the paradox that the deadly arrow must be pulled back toward one's own heart in order to strike the heart of the opponent, and that the more it is drawn toward oneself, the more distant an adversary it can reach.

The external body of Torah is our tool for meeting the obvious challenges of life. Do not kill or steal, it instructs us; feed the hungry, hallow your relationships with the sanctity of marriage, rest on Shabbat, eat only kosher foods -- for thus you will preserve the order that G-d instituted in His world and develop it in accordance with the purpose towards which He created it.

But not everything is as up front as the explicit do's and don'ts of the Torah. Beyond them lie the ambiguities of intent and motive, the subtleties of love and awe, the interplay of ego and commitment; the taint of evil that shadows the most holy of endeavors, and the sparks of goodness that lie buried within the darkest reaches of creation. How are we to approach these challenges, so distant from our sensory reach and so elusive of our mind's comprehension?

This is where the mystical dimension of Torah comes in. It guides us in a retreat to our own essence, to the very core of our soul. It illuminates the selfless heart of the self, the spark of G-dliness within us that is one with its Creator and His creation. From there we unleash the power to deal with the most distant and obscure adversary; from there we catapult our redeeming influence to the most forsaken corners of G-d's world.

these are beautiful pictures, love the jews