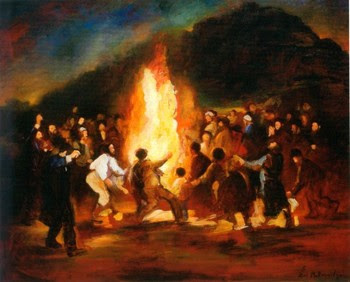 BS"D
LAG B'OMER – REFLECTIONS FROM RAV SHAGAR ZT"L
Rav Zvi Leshem
Introduction:
Lag b'Omer always falls out around the time of Parshat Emor, which deals with the issue of Tumat Met, the impurity caused by the dead. I once heard from Rav Shabbtai Rappaport shlita that chukim are not "strange" arbitrary laws, rather they are "taboos" deeply ingrained (chakuk) in the human subconscious, such as the fear of death and the sense of impurity and uneasiness, let alone terror, that it leaves us with. Rav Shagar zt"l wrote much about death and its rectification, even before his illness. He seemed to realize the power it holds over us and the need for us to deal with it in spiritually positive ways.[1] Perhaps in his own soul he also had a premonition that he would not remain in this world for long. Yesterday, while looking through various notes and papers pertaining to Lag b'Omer, when we commemorate the yartzeit of Rebbe Shimon bar Yochai (Rashbi), I came across long forgotten notes from a shiur that Rav Shagar gave on 15 Iyar 5764 (spring of 2004) about Lag b'Omer. The shiur dealt with the death of the Zaddik, and of course was focused upon Rashbi. Yet for me, re-reading my notes, it was clearly discussing the death of the Zaddik – HaRav Shagar himself….I must admit that my notes are brief and there is clearly much that I didn't understand, and yet, I feel the need to write down these thoughts, as they are related to the Hilula, the celebration, of our Zaddik, whose second yartzeit will be in 25 Sivan, in just over a month. The shiur was based primarily upon two sources, the Gemara in Eiruvin 54a with Rashi's commentary, and Rebbe Natan's Lekutai Halachot: Nezikin 3:8-9[2]. I ask the reader's forgiveness for this brief peek into a topic that deserves a much fuller treatment. I hope that I have merited understanding Rav Shagar's intent correctly.

The Gemara compares our lives in this world to a Hilula, a wedding feast. We are enjoined to enjoy physical pleasures now, for they will not be available in the next world, and our lives pass by very quickly, like a wedding feast. There is little point in long-term planning, as the inevitability of death hangs over all of our heads at all times, and no one knows when his time will come.[3] Rebbe Natan discusses Lag b'Omer, the Hilula of Rashbi, and why it is such a joyous day. He contends that the death of the Zaddik stimulates a great rectification, for humanity and for the cosmos. Death is likened to a long sleep and the resurrection of the dead is the awakening from this slumber. The main avoda of the Zaddik is to rectify the Jewish People, helping them to do teshuva and draw close to HaShem. Paradoxically, this is mainly achieved when the Zaddik is asleep, or in a state of nefila, fallen-ness, which is akin to sleeping. For it is at these times of Mochin d'Katnut, constricted consciousness, that the Zaddik is low enough to connect with the average person and be able to help him to find HaShem. This is also achieved when the Zaddik engages in worldly discussions or tells stories. Additionally, when the Zaddik sleeps, his soul goes up to Heaven in the form of Mayin Nukvin, feminine waters, causing great yichudim, unifications above. Thus according to the Zohar and the Ari, the greatest unification and rectification of all is achieved with the death of the Zaddik, in which his entire soul rises above, together with endless sparks which are rectified. Therefore the Zaddik is greater in death than in life, for he is able to enact a more profound and expansive rectification. This is apparent from the Zohar's description of the death of Rashbi (on Lag b'Omer). At the moment of death the souls of many sinners whom the Zaddik was unable to influence in life are rectified as well. This is why the prostration upon the graves of Zaddikim has such a profound impact causing people to do teshuva, with the greatest example being the visitation of Rashbi's grave in Meron on Lag b'Omer.[4] The celebration on the Zaddik's yartzeit is a premonition of the great joy that will occur at the time of the resurrection of the dead, and Lag b'Omer is also the turning point in Sefirat HaOmer from judgment to sweetness, as the lights of Matan Tora begin to shine.[5]

Rav Shagar adds to the above the understanding that our world is a Hilula, a wedding feast, which moves on headlong towards death, here today, gone tomorrow. Chassidut emphasized this in the context of the Hilula of the Zaddik. However, if the wedding is actually a foreshadowing of inevitable death, why is it experienced as ecstatic joy? The answer is bound up in our view of death. As long as we are trapped into apprehending death as no less than the complete extinction of the human being, than life does seem to be a fruitless experience with no hope of personal redemption. Paradoxically, this pessimistic view, which can lead to nihilism, is a function of our belief in ourselves as "yeish", something. However, if we can accept that in reality we are "ayin", nothingness, then death ceases to be extinction, and becomes, in the view of the Ari, evaporation and return to unity within the Divine Ayin. Either way, our sense of temporality and terminality become more and more acute as we move though life.

The First Lubavitcher Rebbe (based upon earlier Kabalistic sources) points out the paradoxical reality that "loss produces presence", and thus, people sometimes seem much more present after they have died. When someone is alive, we tend to understand them based only upon limited (and external) aspects of their personality, whereas after they are gone, we are able to gain a total understanding that eluded us during their lifetime. When the Zaddik dies, his soul becomes incorporated into the Ein Sof, the endless expanse of Divinity above. According to the Ari this is an aspect of the raising of Mayin Nukvin, feminine waters. These are the feminine waters of the Shechina, which when aroused, cause a great cosmic unification. This unification, dependent upon the avoda of humanity, enables the human being to transcend temporality and achieve eternity.

Our yearning for unity with HaShem above is matched by His desire for us. However, what does He desire, what can we give to Him? HaShem needs our stories, which are our lives. These stories arouse HaShem's passion for us, also leading to zivug, to cosmic unity. When this happens our sparks, particles of our own souls, are rectified. Then we rise to the Shechina at the time of our death, the beginning of deep sleep and a dream-like state. We experience this daily in prayer, when we fall upon our faces in Tachanun, giving ourselves over entirely to HaShem and achieving the awareness that we are not really in control at all. Ultimately, just as regular sleep leads to the renewal of our consciousness (hitchadshut hamochin), so too, this great sleep prepares us for the ultimate renewal – the resurrection.

May we merit to experience the presence of all of the great Zaddikim; Rashbi, Rebbe Nachman and Rav Shagar, as "larger in death than in life". May we all do teshuva and merit, after 120 years, to evaporate into the great expanse of Ayin, in a great state of unity and rectification. May we merit the ultimate rectification of the Messianic Era and the Resurrection.

[1] See our drasha for Ve'etchanan – Nachamu 5768, and see the chilling passage in Rav Shagar's Al Kapot HaManul, p. 68-71: Compassion comes from the helplessness of the human being. I sit by the bed of a cancer patient, his days are numbered, he groans with pain…instead of denying and fighting it – which only increases his suffering and fear, he needs to learn to accept, to get go of his grasp and give himself over to the will of HaShem, to accept his lack of control…when he lets go…something deeper is created, compassion…
[2] Based upon Rebbe Nachman, Lekutai Moharan 35.
[3] Of course this "Dionysian" description of life, death and pleasure requires explication in its own right and can hardly be taken at face value as the standard Rabbinic view of reality and proper behavior. For a wedding drasha based upon this Gemara, see Rav Yair Dreifuss shlita, Reim HaAhuvim, p. 95.
[4] See also the Netivot Shalom on Lag b'Omer.
[5] See also the Bnai Yissaschar on Lag b'Omer.
Picture courtesy of jewishpress.com. Click here to get Dixie Yid in your e-mail Inbox or here to subscribe in Google Reader.
Posted by DixieYid (يهودي جنوبي) at 2:05 PM