How'd Avram Show Everyone His Wealth Was From Hashem? 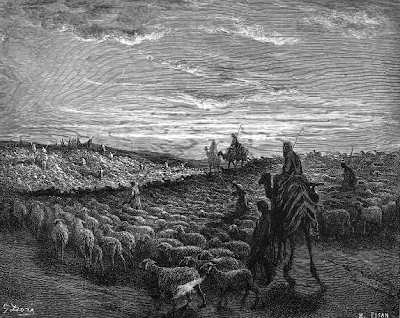 Interestingly, on the pasuk in Breishis 14:23, where Avram tells the king of Sedom that he would not take any booty at all from the war between the four kings and the five kings, Rashi says it is because Avram doesn't want to become wealthy through this King's gift lest people say that Avram became wealthy only because of the King of Sedom's gift, rather than through Hashem making him wealthy because of Hashem's promise to bless him.

Q1: This is hard to understand. In the previous perek (13:2)Avram became wealthy through the gifts of Paroh! Plus, at the very beginning of the Parsha (12:5)when Avram was leaving Charan at Hashem's command, it says that he took all of his wealth and servants with him. So you see from this earlier verse as well that Avram was already wealthy before the king of Sedom's offer of the booty of the war. So why would Avram have thought that people would think that this king had made him wealthy, rather than Hashem, when he was already wealthy even before that!

It could be that this booty offer was earlier chronologically than the previous two perakim. Those two perakim took place after Hashem's command to Avram to leave Charan and go to Eretz Yisroel, which was when Avram was 75 years old. Perhaps the war of the 4 and 5 kings and the booty offer was when Avraham was 70 years old (Rashi on Breishis 15:13), 5 years earlier chronologically than the earlier psukim (as I wrote about earlier). So it could be he wasn't wealthy yet at the time of his refusal to take the wealth, which would explain why people might think that the king of Sedom had made him wealthy, since he was not yet wealthy at that time.

The Maharal in Gur Areye ,his peirush on Rashi, gives an explanation of Rashi that I think answers both of these questions. He says that Avram was not saying merely that he wanted people to know that Hashem made him wealthy. Rather, he is saying that people should know Avram became wealthy through Hashem's blessing specifically. Since the booty came from a war where kings were taken captive, this was wealth that came through a curse. Whereas the gift from Paroh was just a plain gift upon his departure from Mitzrayim. This approach would explain why only the booty from the war of the 4 and 5 kings failed to demonstrate that Avram became wealthy through Hashem's blessing, whereas the gifts from Paroh or his own business dealings did show how Hashem made him wealthy in a way of blessing.

May Hashem make us all wealthy and may it be through a bracha and not klala!
-Dixie Yid

Click here to get Dixie Yid in your e-mail Inbox.
Posted by DixieYid (يهودي جنوبي) at 5:01 AM

An audio shiur that contains an explanation of this teaching can be found here.

I believe it mentions that Lot lived in Sedom during this episode so that would rule out 5 years before Avram and Lot moved to Canan.

I was going to suggest that maybe he didn't want to keep the "spoils of war" only the gifts of "friends". But you said that already...

1. Avraham saw that he would be called upon to judge sdom (or at least influence the judgement of sdom) so, he didn't take anything from sdom so that when he made a request for divine mercy on sdom it wouldn't be viewed as being motivated by self-interest.

2. Avraham's other sources of wealth were from outside of the promised land. Sdom was inside of Israel. So, any possesions of sdom really already would be inherited by him, (his children) so he didn't want anyone to think he received any of the blessing of eretz yisrael as a gift from anyone but HaShem -- this also nicely explains the _purchase_ of me'arat ha'machpelah. This also can be read into Rashi so i particularly like this one.

3) a fusion of the two ieas: since HaShem promised him the land, he knew he would have to judge or testify regarding the nations in the land and he didn't want to be blinded by financial ties to any of them.

ASJ, IY"H, I'll need to find the ability to listen to that shiur. Thank you!

I hear the vort!

Thank you for thinking about the problem. I really appreciate all of your comments recently. Kol tuv!

Very nice approaches! I like the idea that he didn't want it to seem like, outwardly, he was davening for the residents of Sedom and the surrounding cities because he had received money through them. Interesting!

Also an interesting idea with not wanting to receive davka the blessings of E"Y in a way that was less apparantly through human hands.

I'll have to think a little bit more creatively as well.