Rabbi Golshevsky's Approach to My Question on Disinheriting Yishmael 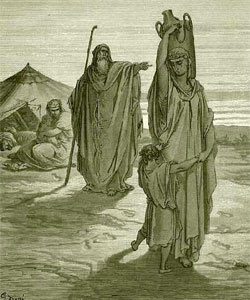 Here is a response by Rabbi Micha Golshevsky to my post, questioning how Yishmael could have been disinherited just by being driven out of Avraham's home. Thank you Rabbi Golshevsky!

In the course of my research for my piece in Daf Digest a short time ago I ran into several answers to your question.

Perhaps the simplest answer is that of the Be'er Sheva (in Sanhedrin [91a] D"H: ul'vnei hapilagshim). He explains that since Yishmael was a shifcha's son, he was not considered Avraham's son and could not inherit for this reason. The Ohalei Yitzchak asks a question on this Be'er Sheva. He asserts that this seems very unlikely since it seems clear to him that any child of Avraham was b'kedushah (conceived of a "converted," Jewish mother). How could she have not converted all the way either before she was expecting or after?

However, I am not sure what indication there is that Yishmael was indeed born b'kedusha, unlike the Ohalei Yitzchak assumes. Because Sarah told Avraham to marry Hagar for her own benifit, what proof is there that it was b'kedusha? After all, Sarah treated her as a shifcha even after Hagar was expecting!

Furthermore, see the Rambam in Nachalos 6, 9. Although the gemara in Kiddushin 17 mentions that a non Jew inherits min HaTorah, the seder of yerushah does not apply to a non Jew at all.
Although Yishmael was Avraham's son, he was born from a shifchah. Even if he is considered b'kedushah in some way, who is to say that if he leaves he doesn't forfeit his rights. It is plausable that a child of the avos born from a shifcha is Jewish and inherits only if he is treated as a child. If he is evicted he does not.

It is also possible that Sarah didn't mean from a halachic point of view. After all, when Avraham sent Eliezer to find a wife for Yitzchak, the Midrash (Breishis Rabbah Parshah 59 siman 11, brought in Rashi) records that he carried with him a document declaring all of Avraham's property to Yitzchak. Maybe this is what Sara meant.

Machaneh Yehudah (siman 282) explains that Avaraham was unsure about Yishmael since he didn't know if a very righteous person would come out of his descendants and make giving him the inheritance worthwhile. Sarah, who was much greater than Avaraham in prophecy, saw that there would not be any such righteous descendants. Maybe he means the second answer above (although he may mean the first or a different answer.

The truth is that the way I saw this whole discussion was from the other side: It is clear that Avraham removed any inheritance from Yishmael with the above document. The Mizrachi asks: how could Avraham avinu avoid Yishmael receiving any inheritance? After all, he fulfilled the entire Torah and in Kesuvso 53 we find that one should not tamper with his inheritance even to give his "good" son and remove from his "bad" son. It is in this context that the sources brought here discuss this issue.

I honestly did not have a problem with this question since bad in the gemara (that prohibits disinheriting a bad child) need not mean an idolater, just a less good human being for whatever reason. Chazal prohibited us to give the money to the better one, because of what may come out of the bad. But Yishmael was an idolater. The Maharam Shick (Choshen Mishpat, siman 43)writes that this rule only applies to someone who either doesn't treat his parents properly (Rambam) or isn't exactly perfect in his obligations to heaven (Tur) Not an idolater etc.

The Sadei Chemed and the Igros Moshe (Choshen Mishpat II siman 50) both concur with this psak so the Mizrachi's problem doesn't begin. Of course the Mizrachi clearly argues but the other luminaries may be explaining according to his understanding even if they would agree with the Maharam Shick etc in principle.

records that he carried with him a document declaring all of Avraham's property to Yishmael. !!!

zei gezunt and all the best

Dixie Yid: My Pleasure as always!
Anonymous: Whoops! Sorry about the typo.
Thank you for pointing it out.

It is possible that there is proof to determine if Hagar was converted. Rashi states on the Pasuk ``es hanefesh asher asu bichoron`` that Avraham and Sarah converted those whom they were ``machnis tachas kanfei hashchina``. The Gemara Sanhedrin
[98b] brings this pasuk as a limud that one who is ``migadel`` anothers child in the way of Torah is considered that he ``created`` the child. There the Gemara qoutes Rav Elazar that one who theaches anothers child Torah it is as if he ``created`` them ``lidivrei torah``. Based on this Gemara we may raise a few questions.
How does Rashi prove from this Pasuk that Avraham and Sarah converted anyone maybe they taught them the ways of Hashem as Avraham knew from the Torah without converting them?
What does Rav Elazar mean by ``created them for divrei torah``, does this argue on the original statment of the Gemara that one who teaches anothers child Torah it is considered as if the teacher ``created`` the child?
It is possible that Rashi viewed this Gemara as proof that Avraham did convert them. Based on the fact that the Gemara compares ``created`` to ``created for Torah`` we may assume that Avraham not only taught them Torah but actually created them for Torah. It seems that that can`t be true unless he converted them. Based on this it may be reasonable to say that even if Hagar was still considered a shifcha she was converted by Avraham much like the others whom Avraham converted. [In addition, the converts were considered ``nefesh``, possibly to imply a lesser degree of spiritual status. If Avraham converted them why were they considered ``nefesh``. Possibly, just as nefesh can mean a full fledged convert of Avraham without arguing their status as converts, the term shifcha may not imply the opposite of conversion. It may imply her status in comparison to Sarah.

Dixie Yid: Thank you for correcting my typo.
Anonymous: I don't see any proof at all. Nefesh asher asu b'charan can mean many things (see Midrash Rabbah 39:14 the source for the Rashi you qoute.) In addition, perhaps "the child" was Eliezer who remained a slave because he was a descendant of Cham. For that matter, Hagar was also a "daughter ofCham" (see Midrash Yilamdeinu.) Of course that doesn't mean she didn't convert. And it doesn't prove that she was never freed.
You may be correct that the word slave or shifcha doesn't mean halachic slave in our context, but some kind of servant of a different halachic stature. Another pshat for the verse describing Hagar as a shifcha after her marriage with Avraham could be a reference to Sorah's freed shifcha.
Although presumably, she started as a full fledged shifcha there is no conclusive proof that she remained that way.
It is clear from the Mincha Belulah that Avraham freed her before they married. He asks how she was permitted to Avraham--who kept the whole Torah--since she was a first generation mitzris.He explains that Avraham was a ger and a ger is permitted to a mitzris who converted.
But it comes out of the Birkas Shmuel (on Chumash printed over 300 years ago) that she remained a slave.
In the Arizal's view it seems very unlikely that she converted except as a slave.
He revealed that Hagar was an aspect of kelipah. More specifically she was the harsh judgments of the klippah as opposed to Yitzchak who was the judgments of holiness.(That's why the gemartria of Yitzchak and Hagar are both 208).
Yet elsewhere when he discusses where the neshamos of geirim come from, it seems clear that they do not come from the dinim of the Klipah.On the contrary, the neshamos of geirim stem from the very best.