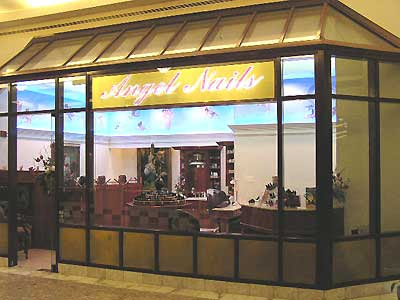 I had a thought as I passed a Nail Salon next to where I daven mincha during my lunchtime at work, until the absurdity of it registered.

From time to time, my wife had gotten her nails done at a nail salon near where she works. I had this brief thought that I would be such a good husband if I offered to get her nails done either on the way into our out of mincha, so that she wouldn't have to do it herself.

Obviously, such an idea is absurt since something that one must do himself personally, can't be done by another person.

The same thing exists in halacha though. In general, if I have a mitzvah she'b'gufo, a mitzvah that I must do personally, no one else can do it on my behalf. I must personally put on tefillin, daven mincha and do the na'anuim (wavings) with the Lulav and Esrog. No one can do those things on my behalf. In general, with regard to personal mitzvos like that, one says the bracha with the prefix "lamed" before the individual part of the bracha. i.e. "who has commanded us to lay teffilin."

However, with mitzvos that must be fulfilled in general, but not necessarily by me personally, like Mezuzah or dipping dishes in the mikvah, the bracha has the word "al" before the individual part of the bracha. i.e. "who has commanded us regarding the affixing of a Mezuzah."

Although there are exceptions to these rules for several reasons when it comes to the text of a bracha, the idea is there.

Similarly, the bracha for learning Torah is "la'asok b'divrei Sorah," to engage with the words of Torah. This wording of the bracha indicates that learning Torah is a mitzvah she'b'gufo, and must be done personally. No one can fulfill your mitzvah of learning Torah for you. You can no more get someone to learn Torah so that you won't have to than you could have someone do your nails for you while you are somewhere else!

Click here to get Dixie Yid in your e-mail Inbox.
Posted by DixieYid (يهودي جنوبي) at 5:00 AM

Email ThisBlogThis!Share to TwitterShare to FacebookShare to Pinterest
Labels: Humorous

I'm not sure I understand...are you saying that she needs to book her own nail appointment?

I'm being a bit silly. No, I meant that I had a thought for a moment, before the absurdity of the thought registered, that I would actually "have her nails done" for her, so she wouldn't have to go to the trouble of having it done herself.

It's just to make the point that there are certain things in Yiddishkeit that other people just can't do for you and you have to do yourself. Just like someone else can't do their nails for you (if you need your's done and you happen to be a female), it's the same things with mitzvos she'bagufo.

AAAh...ok. i see. It's Sunday. and the coffee is slooowly setting in now.