Special Forces Soldier' in Iraq - Perspectives from the Ground 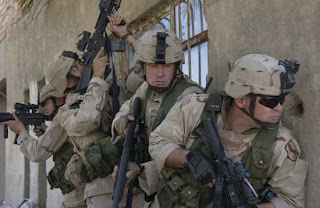 I usually do not post anything about political or secular topics, except occassionally in jest. However, I am in touch with a Special Forces soldier in Iraq ("SF"), who believes in the Torah and is committed to keeping the Sheva Mitzvos Bnei Noach. In this case, I think his insights from the ground in Iraq are invaluable and so rare for us to hear. In these two e-mails, he explains what the issues really are in Iraq, what the people really think of America's involvement there and the prospects, on a derech hateva level, for a positive outcome there. I think you will be riveted and hear things that you never knew before. I want to clarify though, that he is speaking only for himself, and in no way are his statements to be construed as an official statement of policy by the U.S. military.

He wrote me this e-mail in late August:

...As for you questions about Iraq, in general it is a very complicated place, which I imagine can be said of any country. Iraq is a very classically arab country in the sense that they are extremely particular about hospitality even if they don't want Americans in the country.

For the most part, Iraqis are not supportive of the American presence in the their country, but I think that you would be hard pressed to find any local nationals wouldn't prefer to be in charge of their own country. That being said, most Iraqis aren't going to pick-up weapons and start fighting with us since they realize that America is trying to help even if it is doing a poor job of it.

One of the big problems that I see is that we as Americans are used to throwing money at problems. However, up until the present we have thrown our money at temporary solutions instead of long-term solutions. I was talking with a city council member for one of the largest cities in Iraq the other day and they took turns lecturing me about how Iraq has plenty of their own money and what they really need is advisors and experts not a bunch of money.

Electricity is always a problem for Iraqis, although that has been the case the entire time that Sadaam was in power.

As far as politics are concerned the tribes in Iraq need to step up and take a lot more initiative with governing their country even if it means that we stop trying to force an American democracy on them. (redacted) I think that will be a good thing since it is a much more natural fit for Iraqis.

As far as the security situation, it has gotten drastically better over the past couple months, but Ramadan is approaching so we might see a surge of activity. One thing that the news is not focusing on at all, but is a daily reality for us, is Iran's Revolutionary Guards and Hizbollah's involvement with insurgent activity within the country.

But, deep down Iraqis are just like everyone else in the world, they want to see their children grow up to be prosperous and they want to go about their lives. Overall, I can not stress enough that Iraq is a complex country and nothing should be evaluated with it in a hasty manner. But if we pull out to soon the country stands a high chance of completely falling apart.

He wrote me the following e-mail last week, explaining to me the effect that he thought Barack Obama's election in the U.S. would have on the future of America in Iraq:

I don't read much of the American press while I'm over here so I'm not sure what is being reported and what isn't being reported.

One of the big things that is of concern right now is that the UN resolution runs out at the end of December and if it isn't renewed then we don't have any rightful legal basis for being here. And, politically, it is unlikely that it will be renewed because the UN will likely not renew simply out of one last spiteful act against the Bush administration with the implicit understanding that Obama's campaign has already
made public their intention to take troops out of Iraq.

That being the case, if the SOFA agreement ("Status of Forces Agreement") is not ratified by both the US and Iraqi side then Coalition Forces in Iraq will be in a very awkward situation. As of right now it doesn't seem likely that the SOFA will be agreed upon because now that the Iraqi politicians realize that Obama will gladly pull out of Iraq, they have started to put ridiculous clauses in the SOFA so that it will never be accepted by the coalition Forces. Hence it appears as though Iraqi politicians are acting like they want a SOFA, but at the same time clearly working against such a thing ever being ratified by both parties.

It is a complicated situation that has become even more complicated with Obama's election. I think that the common misconception in the States may be that we aren't going to leave unless the SOFA is agreed upon. So when they talk about a phased withdraw in the SOFA, people think that the entire point of the SOFA is the withdrawal. It is most certainly not. With a SOFA in place we at least have a set, agreed upon timetable for certain activities within the country, but as long as it is not ratified we could be forced out of here tomorrow. The lack of a SOFA doesn't mean that we can stay here indefinitely, it actually means the exact opposite. In fact, one of the primary insurgent groups, which follows Muqtada Al Sadr, is against the SOFA because they realize that if isn't signed then we may have to pull out of here within a couple of months.

Don't get me wrong, we can't just pack up one night and fly back to the states the next day. There is way too much equipment over here for us to do that. The problem is that once the announcement in made that we are leaving, the entire atmosphere will change. I don't mean that fighting will start. Rather, insurgent groups will probably not conduct any attacks so as not to prevent us from leaving.

But once we make the announcement that we are leaving, Al Qaeda's entire focus will shift back to attack the states and that will be very hard to prevent due to the amount of practice they have had in Iraq. A drawdown of troops is one thing; a withdraw is a completely different animal all together.

As for the changes that people expect Obama to bring, Iraqis, and all Arabs for that matter, don't care about arguments stating that Obama isn't a Muslim. As far as they are concerned his name is "Barak Hussein Obama" and that is enough for them to know. The educated Iraqis have express amazement that America elected a president that has the "John Smith" of names in the Arab world. Obama's name has more in common with the terrorists of 9/11 than with the average American. This simple fact makes Iraqis feel as though he has an intrinsic connection with their part of the world. Thus, what the Arab world suspects is the Obama is going to basically reverse the current treatment of the Arab world. Especially of note is that most Iraqis realize that Obama is going to change the fortunes of the Palestinian people.

I think that the entire world situation right now is very tense and Obama has only thrown another wrench in the gears of the world, but we will have to wait and see what he actually does once in office. Either way, B"H that Hashem is in charge of everything and as Rebbe Nachman said, runs the world even better now!