How Did Driving Yishmael Out Effectively Disinherit Him? 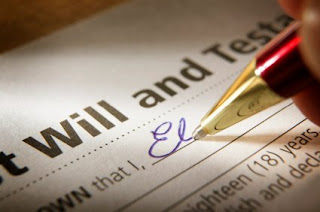 I have a Jewish inheritance law question. In Breishis 21:10, in the 5th aliya of Parshas Vayeira, the pasuk says, "וַתֹּאמֶר, לְאַבְרָהָם, גָּרֵשׁ הָאָמָה הַזֹּאת, וְאֶת-בְּנָהּ: כִּי לֹא יִירַשׁ בֶּן-הָאָמָה הַזֹּאת, עִם-בְּנִי עִם-יִצְחָק." "She said to Avraham, "Drive out this slave-woman and her son, for the son of this slave-woman will not inherit with my son, with Yitzchok." (Translation: Metzuda) Although one could say this is talking about being Avraham's spiritual heir, the simple meaning here, and Rashi's comment, indicate that Sorah's concern was that Yishmael should not financially inherit from Avraham, even though he was Avraham's son. She intended to accomplish this by driving him out of the house.

I don't understand. How does living outside of Avraham's house diminish Yishmael's right to inherit from Avraham? For instance, Rambam in Hilchos Nachalos lays out the order of heirship for those that inherit when someone passes away. I don't see anywhere that a son being kicked out of his father's house causes that son to lose his status as an heir! Although if one uses various sideways methods of disinheriting a halachic heir, "the spirit of the sages is not happy with him," Avraham didn't even do one of those methods here. All Avraham did here was remove Yishmael from his home. He did not use one of these methods of getting around the law.

So does anyone know how there was any nafka mina, any effect in the laws of inheritance, by Avraham driving Yishmael out of the house? How did that act disinherit Yishmael?

It is true that Chizkuni on this pasuk says that Avraham had the din of a Ger and "ger she'nisgayer k'katan shenolad dami," a Ger is halachicly sepparated from all of his blood relatives which would mean that Yishmael would not inherit from him anyway. But I have two questions. One is that Yishmael would have been a non-child to him even if he had stayed in the home! So what did driving him out of the home have to do with inheritance even according to that pshat?! And furthermore, according to the simple meaning of the Torah, and according to the opinions that Avraham did not technically have the din of a Jew, Avraham would have still had the din of a gentile technically, and Yishmael would inherit from him notwithstanding his expulsion from Avraham's home! (See, Rambam Nachalos 6:11)

P.S. I am actually writing an academic paper on the various methods of allowing one's non-halachic heirs to inherit while staying within the parameters of Jewish and secular law.

See Rav Elchanan Samet's shiur/article entitled "The Birth of Yitzchak and the Banishment of Hagar and Yishmael." I only skimmed this last night and I do not think it will suit your purpose--he cites the Hamurrabic Code.

This question crosses my mind most mornings while saying akeidas yitzchok before korbanos if I am in not too big of a rush and begin to think about what I'm saying.

"Kach na." "What/who?" "Es bincha." "Which one?" "es yehidcha." This is how I imagine the dialogue. I haven't found a satisfying answer yet.