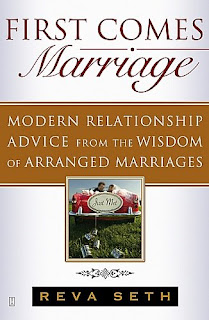 I was surprised to see a story about a secular author who has basically found her husband by shidduch dating. People are shocked to hear that she got engaged after only seven dates. Now in our communities, that is not unusual at all, but in the secular world, this is a real breakthrough.

In this week's Parsha, Chayei Sorah, Breishis 24:67, the Torah says "וַיִּקַּח אֶת-רִבְקָה וַתְּהִי-לוֹ לְאִשָּׁה, וַיֶּאֱהָבֶהָ." "And [Yitzchak] married Rivka, and she a wife to him, and he loved her." As the Title of Mrs. Seth's book says, "[f]irst comes marriage." Only after the Torah says that Yitzchak married Rivka does it say that he loved her.

Even those of us who got married through Shidduchim often focus on the problems in the system. However, despite the narishkeit (smallness) and stress in the system, it is easy to forget that most of us get married after less time, in a more successful marriage, and with less heartbreak than those people who are without any kind of arranged dating.

In an interview from a blog called Lemondrop, the author points out that even for those people who are currently not in a culture where arranged dating is part of the lifestyle, they can learn from the system. The things she points out are already ingrained in our system of shidduch dating. She points out that one should not just meet people in social places like bars (obviously for us), as this causes people to end up together merely because they are attracted to one another, even though they are usually not compatible.

She also suggests making a list of things that one is looking for in order to be compatible. i.e. sharing a similar place in life, sharing similar goals and plans for life, etc. And then she says that one should not date people who don't fit these goals! It will be a waste of emotional energy and time from life.

Even though they were not orthodox Jews, my parents also met on an arranged date, and are happily married for over 40 years! My wife and I were set up and had went for a relatively long time (3 months) before we got engaged. We have a friend who proposed to his wife on within 48 hours of their first date (they weren't frum at the time either).

This sounds like a book with common sense advice that is a real chiddush (novelty) to the broader community! Let's hope some of it is taken to heart.

(Picture courtesy of Simon and Schuster)

Click here to get Dixie Yid in your e-mail Inbox or here to subscribe in Google Reader.
Posted by DixieYid (يهودي جنوبي) at 5:02 AM

Email ThisBlogThis!Share to TwitterShare to FacebookShare to Pinterest
Labels: Marriage

one thing to keep in mind is that while one can make this diyuk for Yitzchak, one can make the opposite diyuk for Yaakov. He personally went to find a mate, and Bereishit 29:18 states וַיֶּאֱהַב יַעֲקֹב, אֶת-רָחֵל; וַיֹּאמֶר, אֶעֱבָדְךָ שֶׁבַע שָׁנִים, בְּרָחֵל בִּתְּךָ, הַקְּטַנָּה. So he loved her before he married her.

True. I'm famailiar with that one as well, but it's it amazing that this book comes out whose title says about the marriage/love order that "First Comes Marriage" right in Parshas Chayei Sorah with the pasuk about Yitzchak!

This is not an issue which has a one-size-fits-all right answer for every single person, but to the secular world, the idea that marriage should preceed love *any of the time* is a chiddush.

I don't see the pasuk by Yaakov as a stira. But they are pointing out two different approaches that may be right for different people.

I would be interested in reading the book. I am not frum at all, but I do find the concept of arranged marriages something that I would possibly consider if it is true that issues of compatibility are resolved before you even date the person.