He Died From Smoking on Shabbos 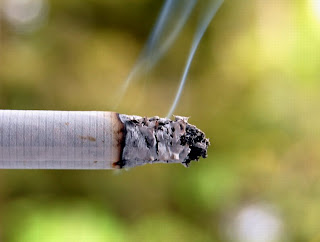 Here's a funny and sad story I heard from R' Reuven Boshnack, who heard the ma'aseh from R' Mordechai Twerski in Flatbush, who heard it from his uncle, Rav Michel Twerski of Milwaukee, who the story actually happened to.

Reb Michel was on a bus in Eretz Yisroel and he met an old Russian Jew who was not frum and they started talking.

This Yid told Reb Michel that in the old days around Minsk, no one would break Shabbos publicly. If anyone wanted to smoke on Shabbos, they had to go out of town where it wasn't too public. They usually went to the cemetary.

One Shabbos, he went with a friend on Shabbos to smoke in the cemetary. He lit a match and the wind blew it out. He lit another match, but that was blown out too. Eventually, they lit every match in the matchbook, and they were all blown out. Really wanting a cigarette, his friend remembered that by the kever of Reb Ahron of Karlin, there was a light that was constantly lit.

They went over to the kever. In order to reach the fire, this man's friend had to lean all the way over the kever of Rav Aharon Karliner. While he was leaning over, trying to light his Shabbos cigarette, he was struck with a heart attack and died immediately. The whole experience was very upsetting for this Jew.

"So," Reb Michel asked him, "Did that experience cause you to change anything about your life?"

The man admitted that he did have to make one change. From then on, he had to find a different buddy to smoke on Shabbos with!

Oy! Hashem open up our hearts to hear your messages to us!

If God killed him for smoking on Shabbos then why are the myriads of Jews on Shabbos dropping dead?

What do you think?

I don't think he was 'killed' for smoking on Shabbos. I also don't think I can, or anyone else, can understand God and his 'actions.'

Anon, you are correct that one cannot ever claim to "know" why a G-d causes a particular thing to happen. If I would know the mind of G-d, I would be G-d.

However, it would be a mistake to not to take suffering as a signal to do teshuva.

"At a time when suffering comes upon them and they cry out and groan, everyone knows that because of their evil deeds, this evil has come upon them. As it says in Yirmiyahu 5:25, 'their sins caused these.' And this [response of teshuva] is what causes that fuffering to be removed from upon them.

L'ma'aseh, don't be cruel to a hear that's true!

1. Nothing happened (suffering wise) to the survivor. 2. The guy who died can't do teshuvah anymore.

I agree that we should constantly aim to become closer to God. And that if something good or bad happens to us we should recognize God's message. I also believe that the Rambam you quoted is not applicable to the story you blogged; it is probably more appropriate for plagues and famines.

That said, the survivor should definitely not smoke on Shabbos as he should realize that 'life' is only temporary and easily extinguished but not because, although possible, God killed his buddy while trying to smoke on Shabbos.

As an aside I would venture to pin his demise on the disrespect to Reb Aharon Karliner -- as lighting a match on Shabbos is more severe then smoking.

Also, it probably transpired in Pinks (not Minsk) as Reb Ahron from Karlin is buried in or around Pinsk.

I see you are now willing to pin it on something! :-) But I would tend to agree with you. It was probably related in some way to the combination of smoking on Shabbos with the disrespect to the Tzadik.

But I would disagree with you about the Rambam. There are plenty of places in Shas where the idea of suffering on an individual level is taken as a sign to do teshuva. The main one that comes to mind is Brachos 5a, where "אמר רבא ואיתימא רב חסדא אם רואה אדם שיסורין באין עליו יפשפש במעשיו שנא' (איכה ג) נחפשה דרכינו ונחקורה ונשובה עד ה' פשפש ולא מצא יתלה בבטול תורה." "...If one sees suffering coming upon him (singular), he should examine his deeds... If he searches and he finds no sins, he should attribute it [to the sin of] bitul Torah."

You see that the principal is the same with individuals as it is with the klal.

I am not willing to pin it on any particular thing, however it would make more sense...

As far as the survivor goes no yissurim came upon him (the survivor -- it was his buddy who suffered/died no him) so lishitascha he should not do any teshuva.

It isn't only yissurin if one suffers or dies physically. As the Gemara in Erchin 16b says, even the smallest things that involve no physical pain whatsoever, only some invenience, are considered yissurin. Kal vachomer, the suffering of having a friend die right in front of him, especially under such circumstances!

As a second point, this is not my shita. It's the shita of Chazal, Rambam, et al.

The person you are speaking for in the story didn't seem very concerned with what happened -- not based on they way you wrote it anyway.

True, unfortunately, he did not seem to concerned. That was the "sad" aspect of the story that I was referring to in the main post.

I was taught to believe that everything good that occurs to a Jew is only because of something good the person did. The source of a Jew’s Hashpah is only from Kedushah. Now in regards to suffering, that is something we don’t know since many times Hashem causes suffering in order to cleanse the person, which is out of his great love. Just like a great king who lowers himself to diaper his child.

So i think when something bad happens to a Jew; we cannot judge since we have no idea G-d's ways.

Having said that, we know that tzadikim could have an Hakpadah. So if anything i would best understand this story more of and Hakpadah of the Tzadik then anything else.

I don't think the chesed of suffering, which is to cleanse a person, is a stira with the idea tha the died because of a sin. The whole reason someone needs the chesedof a kapara is because he's committed a sin. So in this case, it could be that the sin of breaking Shabbos required the chesed/love of the kapara that came through misa.