The Choice Facing Jews With a Homosexual Orientation 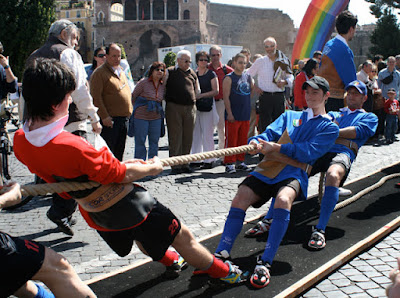 I received the following very interesting Guest Post by our friend, Yosef Hakohen, following up on my post about Aish.com's article on Homosexuality. (UPDATE: David has written a follow-up article, addressing many of the Aish.com commenters who criticized him for trying to change his homosexual orientation.) There, I brought up the tension between the two general approaches that people with a homosexual orientation should take. Is it better for them to try to become heterosexual and get married, or to just live an essentially celibate life of keeping the mitzvos without marriage, and certainly without forbidden homosexual relationships.

A few weeks ago, you referred to an article that Rav Aharon Feldman wrote in 1997 concerning the struggles of Torah-committed homosexuals, and you mentioned that his article seemed to contradict the recent article on this theme which appeared on aish.com. You wrote:

"Aish.com has published a very bold and interesting article by a man named "David" who's a man in his 40's with a wife and children, who lived a homosexual life for a very long time. I was very surprised by his approach. I had read R' Aaron Feldman's article a few years ago, suggesting that homosexual men not attempt to marry women, etc., but rather to take advantage of their "inability" to get married and dedicate their lives to doing things for the Klal that "family men" can't really do because of the difficulty in traveling with a family at home. This is certainly a very different approach. And it is one that I was taught to reject as an option for homosexuals, back in my pre-frum days. I'd be interested to hear other people's reactions as well."

Before assuming that Rav Feldman would disagree with the article on aish.com, we need to first focus on the conclusion of Rav Feldman's article, where he wrote to his correspondent:

"I will add that I do not think that it is necessary for you to give up on the hope of someday having a family. The ways of Providence are manifold. For example, I was personally involved in a case of a woman who knowingly married a homosexual man in order to help him overcome his condition. They subsequently had a large family. It was only because they were both deeply religious Jews that they were successful. There is reason to hope that with your acceptance of living a life in the service of G-d, your problem as well will be overcome. Nothing is impossible if we merit Divine assistance; 'Can the hand of G-d ever be inadequate?' "

In his second article on this theme, Rav Feldman clarified his view, based on some new evidence regarding the possibility of changing one's sexual orientation. He wrote:
"Nevertheless, for the material and spiritual security and well-being of each homosexual, it would be best that he attempt to change his sexual orientation. With same-sex tendencies he will have to contend with a lifetime of struggle with his inclinations, and he will be unable to enter into a normal marital relationship and have a family. Many eminent psychiatrists believe that homosexuality is the result of an ill developed sexual identity due to childhood stress. Their view is that to the extent that other emotional problems can be healed, homosexuals can be healed as well. There are thousands of case histories of homosexuals who have converted to heterosexuality."

(The above comments appear on Rav Feldman's old website: http://www.jerusalemletter.co.il/ . These comments are from an editorial introduction to the issue of June 22, 2,000. It is available in the archives of the Jerusalem Letter.)

Click here to get Dixie Yid in your e-mail Inbox.
Posted by DixieYid (يهودي جنوبي) at 5:00 AM

how interesting - there are so many "conditions" that are now deemed Ok, because, we are human. Did Hashem "make" some homosexuals as a test to them or as a test for the rest of us? For them, they must rise above their homosexuality to follow the Torah, which i can imagine, if you are feeling something so strongly within, can't be very easy, BUT for the rest of us, does Hashem want us to be tolerant, to teach these people? I can't imagine Hasham would want us to banish and punish them. What are your thoughts?

Well to the extent that you personally have a contact with someone who you know has a homosexual orientation, for whatever reason, and is trying to stay committed to the Torah, it would be a test for you as well.

But in such a case, I also don't think Hashem would want us to banish such a person. He or she will be facing a very tough nisayon, test, and to the extent that we can be supportive of someone in that situation, it would behoove us to do so! Hashem didn't forbid the orientation its self. Rather, he forbade acting on it in thought or deed, just like the other forbidden relationships for the rest of us.

If someone is trying to overcome such a test, they have great merit. Pirkei Avos says "l'fum tzara agra," that the gain/reward is commensurate with the pain. And the person who works to overcome this ta'avah is certainly being moser nefesh to keep the Torah more than many of us will! So they would certainly deserve our respect and support, and ChV"Sh not any kind of ostracism for such a person.

In regards to a mitzvah of having children and an ideal situation (supposedly) of children having a father and a mother, one solution would be for a gay guy to have children with a lesbian woman. Then they can have whatever relationship they want to have “on the side”, according to their commitment to Halacha (ideally, from Halachic point of view, refraining from forbidden activities, but that’s their personal choice). That way, nobody is sacrificing anything — neither the woman nor the man — and both can have a family.

In regards to the question of “how do we relate to homosexuals, if we consider their behavior inappropriate from Halachic point of view” — the same way we deal with those that break Shabbos, eat treif, and do other aveiros. With ahavas Yisroel. There is no other legitimate or intelligent way.

Then they can have whatever relationship they want to have “on the side”, according to their commitment to Halacha (ideally, from Halachic point of view, refraining from forbidden activities, but that’s their personal choice).

My reply: From a Torah point of view, refraining from forbidden activities is not a personal choice; it is a personal obligation. Even if one does not succeed right away, the obligation is to try and keep trying.

Since we're just after reviewing Parshas Noach last week, why do you think these folks use the rainbow as their symbol?

Interesting question. What do you think?

By the way, did anyone notice the picture I found with the rainbow flag in the background? :-)

So I think maybe they are reminding Him of that.

Although I don't think that is their actual, conscious intent, it does make sense, especially as they (those doing the opposite of trying to keep the Torah) are fulfilling "ki shicheis kol basar es darko al ha'aretz."

The rainbow is symbolic of the fact that humanity is comprised of all sorts of different people. Ideally, we come together to make one beautiful entity. All of the colors are important, therefore from the perspective of a person struggling with the issue of sexual orientation, they too are important. They are not a worthless piece of garbage who has no place in the world. They are humans who struggle with temptations like all of us.

I have many friends who are gay. They have all had to deal with being dumped and rejected over and over again by family, friends, coworkers, etc. It takes a toll on them, as you can imagine. Not one of them feels like it is something they have chosen, for what it's worth. That doesn't mean they must choose to engage in the behavior, but it does illustrate how deep the orientation is for these specific people I know.

Humanity includes a "rainbow" of drives, and as Rav Feldman's article, the aish.com article, and previous comments have explained, the Torah teaches us how and when to use or sublimate these drives.