Why Were Avraham's Descendents Punished For His Sin? 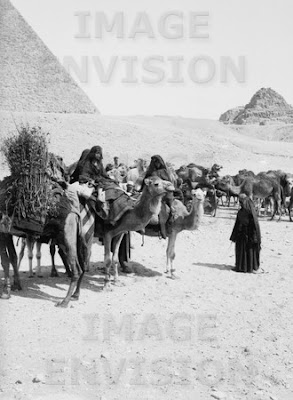 We know the story that when Avraham came to Eretz Yisroel (E"Y), the land of Israel, at Hashem's command, from Charan, Hashem caused a famine in the land. That famine forced Avraham out of Eretz Yisroel and he had to go to Mitzrayim, Egypt, to get through the time of the famine. It is known that Rashi and the Rambam, as well as Pirkei Avos, hold that the command to go to E"Y was one of Avraham's ten tests, which he passed. Rashi explains that the test was to see whether he would second guess Hashem's intentions when he was forced to leave the land that Hashem had just commanded him to go.

However, it is the well known that the Ramban held that Avraham committed a sin and failed this test. He holds that the test was whether Avraham would stay in E"Y despite the famine, since Hashem Himself had commanded him to go there. Ramban says that because Avraham left E"Y to go to Mitzrayim because of a famine, Avraham was punished that his descendants would be forced to descend to Mitzrayim due to a famine and suffer a long slavery there.

My first question on this is, according to the Ramban's shita that Avraham sinned and failed this test, how could Avraham's descendants be punished for his sin?! The Torah says "Ish b'cheto yumas." "Each man shall die for his own sin."!

Then I realized that the Ramban is explaining this punishment from Avraham's perspective and not his descendants' perspective.

We know that Hashem is just and fair. "Tzadik v'yashar hu." Whenever Hashem punishes one person, that person is not the only one who suffers. His family friends and other loved ones suffer as well because of his suffering. Therefore, Hashem's justice and Divine Providence demand that every time Hashem punishes someone, he calculates how that punishment will affect everyone else associated with that person and must determine whether those people deserve the suffering that they will experience due to that person's punishment.

We have many reasons from Chazal regarding why the Jewish people had to go through what they had to go through in Mitzrayim. The Ramban isn't coming to answer this question. But he is coming to explain, derech agav, tangentially, why Avraham deserved to have his descendants suffer in such a way.

Click here to get Dixie Yid in your e-mail Inbox.
Posted by DixieYid (يهودي جنوبي) at 5:02 AM

But how does the Ramban explain the Pirkei Avos that Avrohom had 10 tests and passed all of them?

I would also like to know the answer to this question. Has anyone out there heard a mehalech to this kasha?

I think it says in a different source that Avraham negotiated the way that Jews would go a transformation process — slow and overall painful or very acute and extremely agonizing. Avraham chose the first (I think…). I can look up the source.

I wanted to offer a possible teretz to the 1st part of your question on today's post. I actually have 2 answers. your question was how can we, the descendants of Avraham, be punished for his actions?
my answers:
1. we say in vidui avel anachnu v'avoseinu chatanu
2. we know the concept of gilgul neshamos, and how the neshomoh may just be put on this world for 1 purpose or 1 tikkun. As such, we don't know why young children are niftar R"L, etc.
please let me know your thoughts.

Thanks for the thoughtful responses.

It's true that we say that in vidui, but that just begs the question. Why do we say vidui for that? the classic answer is that we are confessing for doing the same sins that our fathers did, since our guilt is compounded by the fact that we are doing those sins even though we should have learned from their mistakes. To make that parallel here, you'd have to say that Avraham's descendants also left E"Y during a famine, and didn't trust in Hashem that He would help them survive in E"Y. And that they didn't learn from Avraham's mistake in leaving E"Y when he shouldn't have. You could say that I guess, that Yosef, Yaakov & the Shevatim shouldn't have gone to Mitzrayim due to the famine or that, when the famine ended 5 years early, they should have returned to E"Y, and that they didn't. I haven't heard that anyone considers this a sin though. It is certainly an interesting notion!

As to your second answer, it does explain why the descendants were "punished" in that they weren't acutally being punished, but that their neshamos were receiving a tikun, and that they were split-off neshamos from the neshama of Avraham Avinu. That certainly seems realistic too!

is it possible that G-d was testing Abraham's descendents as well?

or was G-d not "sentencing" Abraham's descendents, but predicting the behavior (and the eventual outcome)? That because Abraham left because of famine, his children's children will say "hey Ole Grandpa left, that sounds like a great idea!" - G-d is saying that Abraham set an example for his future generations?

You could indeed say Hashem was predicting their behavior. I guess that would be sort of a ma'aseh avos siman l'banim thing, as were many of the things Avraham did which paralleled the Jewish people's experience according to that principal. And the Yiddin were punished for leaving E"Y for their famine too, since they didn't learn from Avraham's mistake, like I was talking over with Yid'l.

It's possible, yes. But I haven't heard of any sources who fault Yaakov and the Shvatim for leaving E"Y to go to Mitzrayim because of the famine. Anyone heard anything like this?