Dying While Smoking - Don't Be Cruel... 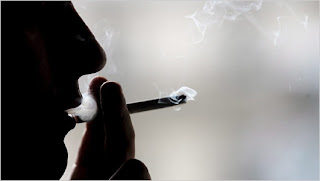 Commenting on THIS POST from this morning, with the story of the Yid dying while trying to light his cigarrette on Shabbos, "anonymous" commented:

I don't think he was 'killed' for smoking on Shabbos. I also don't think I can, or anyone else, can understand God and his 'actions.'

Anon, you are correct that one cannot ever claim to "know" why a G-d causes a particular thing to happen. If I would know the mind of G-d, I would be G-d.

However, it would be a mistake to not to take suffering as a signal to do teshuva.

"At a time when suffering comes upon them and they cry out and groan, everyone knows that because of their evil deeds, this evil has come upon them. As it says in Yirmiyahu 5:25, 'their sins caused these.' And this [response of teshuva] is what causes that fuffering to be removed from upon them.

L'ma'aseh, don't be cruel to a heart that's true!

Nothing happened (suffering wise) to the survivor. 2. The guy who died can't do teshuvah anymore.

I agree that we should constantly aim to become closer to God. And that if something good or bad happens to us we should recognize God's message. I also believe that the Rambam you quoted is not applicable to the story you blogged; it is probably more appropriate for plagues and famines.

That said, the survivor should definitely not smoke on Shabbos as he should realize that 'life' is only temporary and easily extinguished but not because, although possible, God killed his buddy while trying to smoke on Shabbos.

As an aside I would venture to pin his demise on the disrespect to Reb Aharon Karliner -- as lighting a match on Shabbos is more severe then smoking.

Something did happen to to the surviver! He saw his friend die on Shabbos while trying to smoke leaning over the kever of R' Aharon of Karlin!

I see you are now willing to pin it on something! :-) But I would tend to agree with you. It was probably related in some way to the combination of smoking on Shabbos with the disrespect to the Tzadik.

But I would disagree with you about the Rambam. There are plenty of places in Shas where the idea of suffering on an individual level is taken as a sign to do teshuva. The main one that comes to mind is Brachos 5a, where "אמר רבא ואיתימא רב חסדא אם רואה אדם שיסורין באין עליו יפשפש במעשיו שנא' (איכה ג) נחפשה דרכינו ונחקורה ונשובה עד ה' פשפש ולא מצא יתלה בבטול תורה." "...If one sees suffering coming upon him (singular), he should examine his deeds... If he searches and he finds no sins, he should attribute it [to the sin of] bitul Torah."

You see that the principal is the same with individuals as it is with the klal.

Click here to get Dixie Yid in your e-mail Inbox or here to subscribe in Google Reader.
Posted by DixieYid (يهودي جنوبي) at 11:17 AM

I don't think he was 'killed' for smoking on Shabbos. I also don't think I can, or anyone else, can understand God and his 'actions.' [...]

As an aside I would venture to pin his demise on the disrespect to Reb Aharon Karliner —— as lighting a match on Shabbos is more severe then smoking.

So, you think he was killed not by G-d but by Karliner Rebbe?

I think it’s an interesting story, and the lesson we should derive from it is that we should realize that the world and our lives are governed by hashgacha protis, and we should allow everything to teach us a lesson.

Also, the whole inyan of tzaddikim being alive after death. Tzaddikim bichlal are never part of the physical world, so after they “die”, they are “nistalek” —— of the world is not a barrier between them and us anymore. This is why we can implore tzaddikim to help us daven to Hashem properly.

On the other hand, we should be respectful of tzaddikim. An act of lighting a cigarette of a tzaddik’s yartzeit candle was a disrespectful act. Because a tzaddik is one with the physical world, unlimited by its boundaries, and on Shabbos, even the physical world becomes holy, tzaddik’s response to a disrespect was amplified (alternatively, Hashem’s punishment to desecrating Shabbos was amplified through a tzaddik).

In the famous post regarding recitation of tehillim (not on this blog, but on Hirhurim), when people were told that a lot of tzaddikim encouraged recitation of tehillim for refuah, some of them answered to the effect of: “Nu. Tzaddikim also break Halacha sometimes.” We should remember whom we are talking about: the source of our neshamos’ livelihood in this world (see Ch. 2 of Tanya).

וַיָּבֹא הָאִישׁ הַבַּיְתָה וַיְפַתַּח הַגְּמַלִּים וַיִּתֵּן תֶּבֶן וּמִסְפּוֹא לַגְּמַלִּים וּמַיִם לִרְחֹץ רַגְלָיו וְרַגְלֵי הָאֲנָשִׁים אֲשֶׁר אִתּוֹ.
Rashi on this Posuk says that He loosened their muzzles, for he had sealed their mouths, so they (the camels) should not graze in other people's fields. The Ramban among many others asks a question on this Pshat. The Gemara says that the donkey of Reb Pinchas Ben Yair would not eat from non Tithed (not taken Masser from) crops, so why is it that for Avraham Camels we are concerned? To answer Let me begin with a story that happened in an office to illustrate a point. There was a person who worked in a frum office and brought his own milk and every day. The milk would mysteriously go missing at the end of every day. He tried many different preventative measures including writing "Lo Signov" on the milk all of this accomplished nothing, as everyday his milk was still missing. Then one day he had a bright Idea. He poured the milk in a container that was Chalav Stam and low and behold the milk was there at the end of the day untouched. Now we have the answer to the original question a Donkey will not eat un-tithed food yet when it comes to Dishonesty it might not be so stringent.

Nice story. A modern-day example of a thief praying to G-d for success of his “gesheft”. It just shows the problem existing in yiddishkeit, which Chassidus is here to cure: for some people, yiddishkeit has become a ritual, a way of life, not a way of connecting to Hashem. Otherwise, people would worry about not stealing as much as (or more than) about not drinking cholov stam.