The Sudilkover Rebbe on Gerim 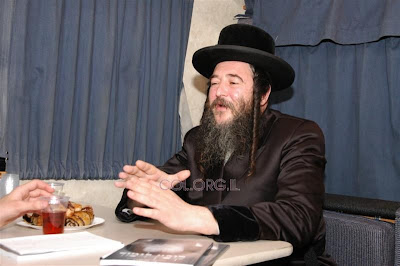 In my conversation with the Sudilkover Rebbe on Tuesday, he asked me what my Hebrew name and mother's name is. I told him that it is "Ploni ben Sarah Imeinu." So when he realized that I am a Ger, he was very happy and he told me a couple of thoughts about Gerus.

One thing he shared with me was that when he davens, he says, b'eima u've'yirah, "Elokei Avraham, Elokei Yitzchak..." But he said that the Avos seem so far away and so long ago. But he said that when he meets a Ger, who is mamash, literally, a son of Avrhaham Avinu, he feels like he is closer to the Avos than at any other time. (Wow.)

The other thought he shared with me was that the reason why the Torah says that a Ger can't be a Melech, a king (Devarim 17:15: "מִקֶּרֶב אַחֶיךָ, תָּשִׂים עָלֶיךָ מֶלֶךְ," "From amongst your [biological] brothers shall you appoint a king [to the exclusion of Gerim]"), is because the idea of the Jewish people having a king, according to the Torah, is something that originates when the Jewish people requested a King to be like the other nations. However, Gerim are literal children of Avraham Avinu, which preceeds the time in Jewish history when Malchus started, and therefore Gerim are above and preceeding the whole idea of Kings, which the Torah portrays as a certain kind of a bidieved, non-ideal situation (We did not discuss the issue of Moshiach being a king also).

IY"H, I hope to speak to him next week and at that time, as A Simple Jew reminded me, I hope to speak to him about this question that had bothered me from the Meor Einayim regarding Gerim. When we spoke on the phone, he spoke very highly of the sefer Meor Einayim. He said that he is very close to that sefer and learns it often. He said that this was not only because he is an Einikel of the Chernobyler, but also because, of the early sifrei Chassidus, he said that it is the most organized. He pointed to the fact that, within each piece, it has a strucure that is easy to follow. (Kasha [or kashas], yesod 1, yesod 2, yesod 3, and then teretz to the original kasha using the various yesodos he'd established as a basis to answer the question.) Other seforim like the Likutei Moharan, Toldods Yaakov Yosef, & Likutei Torah of the Baal Hatanya, he said, contain progressions from idea to idea which are much harder to follow.

This is all very fascinating. I'm glad you could speak with him and share these ideas.