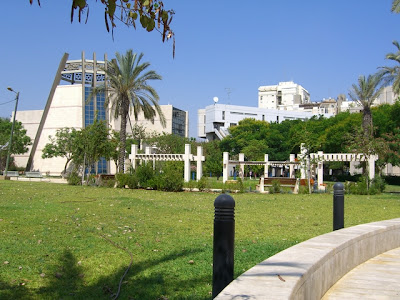 In this post, Rav Zvi Leshem answers a question I posed to him about why he chose to write a doctoral disseration on the Rav Klonymous Kalmish Shapiro, the Aish Kodesh. I am very pleased to present his response.

BS”D
MY DOCTORATE – WHY?
Rav Zvi Leshem
In the midst of the post-doctoral “euphoria”, an anonymous Chassidishe blogger sent me the following sobering question:

Can I ask you what moved you to get a masters and a doctorate? You already have all of the qualifications you will ever need in your teaching career and as the Rav of a Shul. And if you just wanted a reason to write about the Piaseczna, then you could have simply written a regular sefer about him.

The following is an attempt to give a brief answer to this serious question, which of course touches upon the question of our attitude towards academic Judaic Studies. Firstly, on the “technical” level, while it is true that I already have, BH, a important position in chinuch, having a PhD does open up the possibility of teaching in university or college (in Israel this primarily means teachers’ college), which is a chance to reach more people. In that sense, an academic degree, like many other things in our world, is a vessel that can be used for good or for bad, in Kabalistic terms, an aspect of klipat noga.

More to the point, I would first state that studying Judaic Studies at University is not for everyone. One may be confronted with varying degrees of heresies that can result in shvirat hakalim, shattering the vessels of the student who is not properly prepared.[1] Returning to the university after close to thirty years in the Bet HaMidrash, I was confident that my Tora would help me to eat the fruit and throw away the peel, and yet the question remains, what did I hope to gain, and was I successful. And why not just write a book about the Piaseczner, why davka a PhD dissertation (which BeH will also become a book)?

At the university I found certain scholars with great knowledge of Kabbalah[2] who were able to teach me in a systematic way. I believe it is crucial to understand the historical underpinnings and interrelationships between the various schools of thoughts and books. My previously disorganized information was organized and sharpened. I was empowered to study works that were previously inaccessible to me. My teachers also pushed me constantly to do better. Had I merely written a book I would have had an editor correcting grammatical errors, but I would not have had a gaon in Kabbalah (my advisor, Prof. Moshe Halamish) constantly forcing me to check every reference, to learn more, to compare new things and to make sure that I understood everything and expressed it clearly. Nor would I have gained the breadth of knowledge that is expressed in my work. The depth of my understanding of these holy works is also incomparable to where it was four years ago. I thus have no doubt that my teaching of Chassidut has also improved dramatically as a result of this process. Perhaps it is just me, but I also needed the framework of a program that would constantly force me to progress and set deadlines that I needed to meet (especially since I did this work while working full time in education and having my own shul). I also learned a language that will better equip me to convey the truth of Chassidut to a much wider audience.

I would go one step further and posit that without my university training I don’t think I would have been able to properly understand certain aspects of the Piaseczner’s writings. I will give one example. The Rebbe writes repeatedly throughout his books that Chassidut is an expression of nevua, prophecy, and in fact it is clear that the Rebbe himself was both trying to achieve some level of nevua and to train his Chassidim to do so as well. Many people in the yeshiva velt refuse to believe that the Rebbe really means what he writes and attempt to explain this whole concept away. This is not surprising, for in yeshiva we were always taught the mainstream view that prophecy ceased with the return from Babylonia and the building of the Second Temple. A couple of years ago I participated in a course with my teacher Prof. Moshe Idel on Kabalistic Interpretations of the Concept of Prophecy. Here I was exposed for the first time to a significant counter-narrative which runs through many Kabalistic texts throughout the ages and maintains that prophecy did not cease and is still an option today. This opinion was the guiding force behind Rav Avraham Abulafia’s “Prophectic Kabbalah” (his term) in the late 13th century, and influenced, among others, Rav Moshe Cordovero in 16th century Zefat. Rav Abulafia’s prophetic techniques were a very major influence upon Rav Chaim Vital’s (also 16th century Zefat) Sheary Kedusha[3], which was one of the biggest influences upon the Piaseczner, especially in his Mevo HaShearim, the most important work for his theoretical definition of Chassidut. Without this course (which needless to say would never be given in a yeshiva setting), I would not have had the tools to begin to understand what the Piaseczner was really saying, in this, one of the most central tenants of his entire approach!

To sum up, I personally benefited greatly from my university training, and the rigorous demands that were made upon me throughout the entire process. The work that I produced was of infinitely greater quality than what I could have produced “on my own”. For me (and again, this is a personal and crucial point) the academic study I did in Kabbalah and Chassidut was a chizuk in emuna, and not, G-d forbid, a threat to it. I do believe that I have succeeded in harnessing academia as an aspect of my Avodat HaShem in a significant way. I thank the Kadosh Baruch Hu for guiding me through this process and pray that all I have done so far in this field and all that I will do in the future will be l’shem Shamayim and a Kiddush HaShem in the world. The ultimate goal remains that of the holy Baal Shem Tov and the Piaseczner Rebbe, k’sh’yafutzu maayanotecha chutza, to bring Mashiach by spreading Chassidut throughout the world.

[1]Using the categories from Rebbe Nachman’s famous Tora, Bo el Paro (Likutai Moharon 64), I would make the following distinction. Academic Bible studies as carried out in most universities are based upon the heresy of the “Documentary Hypothesis”, which I believe corresponds to Rebbe Nachman’s category of apikorsut that results from Shvirat HaKelim. Thus it is within the category of da ma shetashiv l’apikorus, and in theory, needs to be studied in order to be refuted. Nonetheless my honest assessment is that for most students and certainly for young ones this is extremely dangerous heresy that must be avoided at all costs. All other aspects of Jewish studies are, in my opinion, much less severe, and while not for everyone, can be studied by many. I believe that as in many other aspects of the world, it is important for anshei emuna to enter this field and attempt to redeem it from as much of the klipa that has accrued as is possible. There are nitzotzot here to be uplifted. There are also many young students in Judaic Studies who would certainly benefit from exposure to frum professors. As for what in academia would correspond to Rebbe Nachman’s second category of apikorsut that comes from the chalal hapanui, and is too dangerous for all but the Tzaddik who is like Moshe to confront, perhaps this would include certain aspects of postmodern philosophy. In a world that has been entirely de-constructed, leaving one with no Truth, one really can fall into the Chalal HaPanui, in much the same way that the excess focus on the nature of evil can send one over the abyss, G-d forbid.
[2] I would like to point out as well, that the professors that I studied with (I was quite picky), were, in my opinion, quite objective. I never felt that they were trying to convince me of something that was not in the text they were trying to explicate. (I did see this in other professors that I avoided. The presence or absence of a kipa on the professor’s head was not at all an indication of his likelihood to have a personal religious agenda to read into the text). On the other hand, as a yeshiva teacher, I am well aware of the tensions that may result when one is educating for yirat shemayim and dealing with a hashkafically difficult text.
[3] While the average reader may not detect this in the standard edition of Sheary Kedusha, the recently published Part Four, which was suppressed for hundreds of years due to its radical nature, is clearly an Abulafian work, and this sheds light on the rest of the work as well. See Ketavim Chadashim L’Rabeinu Chaim Vital, Jerusalem 1998. See my dissertation, Part Three, Chapter Seven, where I demonstrate the indirect influence (via Sheary Kedusha) of Rav Avraham Abulafia upon the Piaseczner.

"One may be confronted with varying degrees of heresies that can result in shvirat hakalim, shattering the vessels of the student who is not properly prepared. Returning to the university after close to thirty years in the Bet HaMidrash, I was confident that my Tora would help me to eat the fruit and throw away the peel"

Could you elaborate on the halachic aspect of this, since generally it is forbidden to read heretical material?

It seems that there is a small universe of Rabbeim who are familiar with teachings of the Piaceczna Rebbe. I know that Rabbi Weinberger from Aish Kodesh is part of this group. I wonder if Rabbi Weinberger has had a chance to look through the dissertation?

Learning one tosefos b'iyun for one day is worth more than 4 years studying in an acadmeic environment. Rachmanus on this Professor- may he truly be able to return to the derech Hashem b'temimus.

"Learning one tosefos b'iyun for one day is worth more than 4 years studying in an acadmeic environment. Rachmanus on this Professor- may he truly be able to return to the derech Hashem b'temimus."

Such flippancy and hyperbole is uncalled for.

Learning in an academic setting does present halachic challenges which I have inquired about above. But the fact is that we are still obligated to dan l'kaf zcus. Rav Zvi Leshem is a ben Torah and his Torah learning must be presumed to be leshem shamayim...regardless of where it takes place.

You can read Rav Avraham Abulafia's works here:
http://www.hebrew.grimoar.cz/
Moshe Idel, for all his learning, is a very humble man!

I am pretty sure that studying Judaic Studies at University is not for everyone, especially not for young people with greatest perspectives in the future! Our cheap paper writing service will make everything possible to simplify this process, anyway!