Why Serving Hashem is Not Like Fulfilling Other Ta'avos/Desires 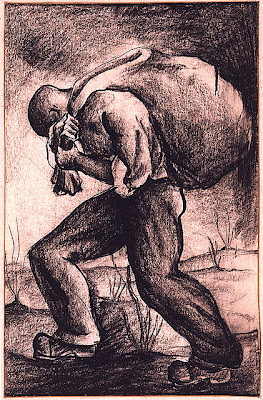 I opened up the Meor Einayim on Parshas Yisro and right at the beginning of the parsha (SLAM!) he hits me with a powerful yesod that goes to the essence of the difficulty in keeping up my resolve in avodas Hashem.

He asked what the big secret of "Na'aseh v'nishma," "We will do and we will hear," is, such that the Midrash says about it, "The angels asked, 'who revealed this secret, which is used by ministering angels?'"

He said that the way Hashem made the world is that first we must do tircha (toil) and avoda (work) in avodas Hashem. The next step after that is the pleasure of the Divine light from that avodas Hashem. He says that if we felt the true ta'anug from avodas Hashem while we were doing those mitzovs and abstaining from those aveiros, then we would serve Hashem to fulfill a ta'ava, a desire, just like we try to fulfill any other ta'ava.

However, after one does the avodas Hashem for a while, he does receve the ta'anug, the pleasure, from that avodas Hashem even in this life. That is what is called, "Olam Haboh," the "Coming World." It is called that because it refers to our worldy pleasure from serving Hashem. That pleasure is continually "coming" to us after a period of serving Hashem without that feeling of pleasure. In contrast, "Asid Lavoh," the "Future world" refers to the pleasures of the next world, as distinguished from the Divine pleasure that we can feel in this world.

This seems to me to be the hardest part of keeping up my resolve in growing in avodas Hashem. There seems to be such a lag time between the investment and the results! And I feel from reading this piece in the Meor Einayim that just when I usually give up is the moment right before I'm about to scale the crest of that mountain.

We have to be mechazeik ourselves not to give up during the "dry period" before the Divine pleasure from our avodas Hashem kicks in. But rather, we must know that it is coming, and that the fact that the gratification is not instant is what makes avodas Hashem into actual service of Hashem, rather than merely a way of serving ourselves.

>>>He says that if we felt the true ta'anug from avodas Hashem while we were doing those mitzovs and abstaining from those aveiros, then we would serve Hashem to fulfill a ta'ava, a desire, just like we try to fulfill any other ta'ava.

Isn't the whole point of the hakdamah to the Aglei Tal that the enjoyment of learning (ta'anug) does not diminish from the lishma? I imagine the same applies to mitzvos as well.

(Note: I did not look back at it inside so I may be missing some nuance)

Chaim,
Ashrecha v'tov lach if you have ta'anug earlier rather than later. But I think that he is speaking in a different context. He, I believe, is addressing the problem of when a person *doesn't* feel ta'anug from his avodah. He's trying to tell that person that he shouldn't be discouraged & give up because he doesn't feel any enjoyment from it at the beginning.

However, the logic of the idea that if you're only doing a mitzvah because it's enjoyable and you essentially would have done it even if it hadn't been a mitzvah, then there doesn't seem to be any aspect of avodas *Hashem* in the mitzva. Rather, it would be more accurately characterized as "avodas atzmo," serving one's self. How do *you* understand where there is "Avodas *Hashem*" in learning, when you enjoy the learning right away?

Perhaps one approach is that talmud Torah is different. Since the "lishma" aspect of talmud Torah is that you are attaining a higher level of deveikus with Hashem through unifying your mind with the "Mind" of G-d, then you are attaining that, regardless whether or not you would have done it anyway if it hadn't been a mitzvah. That could be why learning Torah would still be lishma, even with initial enjoyment, whereas that might not be the case with other mitzvos...

You did not put a vote for Bilvavi as an option.

Anyway, the vote is obviously skewed-how did audio shiurim get 20 votes overnight?

Whatever happens with the vote, I'm sure you'll end up just putting up whatever you feel like putting up and those who are not into a certain post won't read it- Time will tell if this blog has staying power, but as far as I go, as long as you put up Bilvavi, Rav Moshe Weinberger/Aish Kodesh stuff, and Rav Kook- I'll be a regular.

I'm stunned and disappointed-what happened to the bilvavi website? if you go to bilvavi.net, everything's gone, the audio and video shiurim-gone How can we get it back?

It always goes down during Shabbos Israel-time. It'll be back up after Shabbos. Fear not!

What an awesome vort! Yasher koach!