The Atheist, the Bear & My Four Year Old Comedian 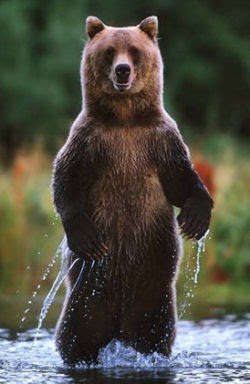 I want to share the following funny story that I received from Rabbi Tal Zwecker followed by some great antics by my four-year-old son:

An atheist was walking through the woods. "What majestic trees! What powerful rivers! What beautiful animals!" He said to himself.

As he was walking alongside the river, he heard a rustling in the bushes behind him. He turned to look. He saw a 7-foot grizzly bear charge towards him. He ran as fast as he could up the path. He looked over his shoulder & saw that the bear was closing in on him.

He looked over his shoulder again, and the bear was even closer. He tripped and fell on the ground. He rolled over to pick himself up but saw that the bear was right on top of him, reaching for him with his left paw and raising his right paw to strike him.

At that instant the Atheist cried out, "Oh my G-d!" Time Stopped. The bear froze. The forest was silent.

As a bright light shone upon the man, a voice came out of the sky: "You deny My existence for all these years, teach others I don't exist and even credit creation to cosmic accident... do you expect Me to help you out of this predicament? Am I to count you as a believer?"

The atheist looked directly into the light, "It would be hypocritical of me to suddenly ask You to treat me as a believer now, but perhaps You could make the BEAR a believer"?

"Very Well," said the voice. The light went out. The sounds of the forest resumed. And the bear dropped his right paw, closed his eyes and recited - in perfect Hebrew -the blessing one says before eating meat: "Boruch Atoh Hashem Elokeinu melech ha'olam shehakol nih'yeh bi'dvaro."

Let's not be stubborn diehards. Sooner or later, everybody will be calling Hashem's Name. Now's a good time to start.

I told my four year old son this story on Sunday, making sure that he understood that it didn't really happen, but that it was a joke. He found it very amusing and a few minutes later, his 19 month old younger sister walked by and dropped a costume bear head from her Purim costume. My son put on the bear head and then said "Baruch Atah Hashem Elokeinu Melech Ha'Olam She'hakol Nihiyeh Bidvaro!!! Yum yum!" My four year old comedian!

Picture courtesy of alaska-bear-viewing.net. Click here to get Dixie Yid in your e-mail Inbox or here to subscribe in Google Reader.
Posted by DixieYid (يهودي جنوبي) at 6:00 AM

reminds me of this one a bit:

This reminds me of the famous joke of a man who was desperate to get a job and eventually found a job of dressing up in a gorilla’s costume and pretending to be a gorilla in a zoo. One day, he was swinging in his cage and accidentally swung into a lion’s den!

The lion is approaching, the man is backing away. Eventually, he is in the corner, and the lion is very close! The man cries out: “Shmah Yisroel, Hashem Elokeinu, Hashem Echod!” The lion stops and answers: “Boruch shem kevoid malchuso leoilam voed.”

As to the joke’s serious content — I am sorry, but I don’t like the message. We should recognize existence of Hashem so that an icicle doesn’t fall on our head? So superficial. It’s true that thunder was created so that we fear Hashem, but what works for a three-year-old shouldn’t satisfy an adult.

Shorty,
Yes, I've heard that joke. Kind of the opposite end of the spectrum.

Cralwing Axe,
Well I'm not much convinced by the "No atheists in a foxhole" arguement either. The fact that people will believe because they *want* to believe in something when they have no where else to turn, is not a *proof* that the G-d in which they believe at that time exists.

I would have thought that video you posted a several times re" the Atheist Convention in LA covered this topic sufficiently...

But seriously, there is another important inyan here, and that's that even at the last second, Hashem will accept the true repentance and return of a Yid (despite the fact that Hashem might not actually save the Yid from physical death or harm).

The quintessential example is the the story of Menashe the rasha, who was literally being boiled-alive in a pot and finally called out to Hashem, in a chutzpadik way (he basically told Hashem that if Hashem doesn't save him, then Hashem is just as much a sheker as all the avodah zaras he had previously worshipped in his life), and guess what? Hashem saved him. Menashe the rasha that killed his own grand-father, Yeshaya Ha'Navi. And Menashe was chozer be'tshuvah. The foregoing, from Navi and Chazal, is also a classic Rav Pincus zt"l mehalech which I felt bears mentioning in this context.

In short: a Yid can always return to Hashem.

This was a classic!!!

Shouldn't the bracha have been "yotzer haadam"?