Jerry Wicentowski, of Wilwaukee, WI, is a great bluegrass musician. I found about him and his music through Rav Ozer Bergman. As a sample, you can hear clips from two of their songs from Shabbos: 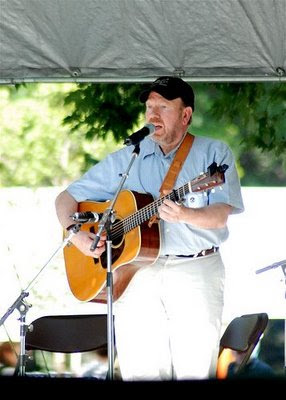 He answered that the processes coincided to a certain extent. Jerry grew up in a traditional home, but one in which he said that there were mixed messages. He said that his father, A"H had great hopes for me in Yiddishkeit but that this wasn't communicated and that his mother came from a more secular background. He attended Crown Heights Yeshiva for grade school and Yeshiva of Flatbush for high school, during which time he rebelled religiously and got interested in Bluegrass music. He said that most of his friends were secular Jews outside of school.

He was re-introduced to Judaism by his good friend R. Yoseph Samuels, a Chabad Shaliach in Milwaukee about 25 years ago. He said that working on the Zemiros allowed him to retain the sound he loved and integrate it with lyrics that elevated the sound.

You can book Jerry Wicentowski's Jewish Bluegrass band, Lucky Break, or just get a promotional package or music sampler by contacting him at(414)273-1880 or jerry@luckybreak.us.

Picture courtesy of flikr. Click here to get Dixie Yid in your e-mail Inbox or here to subscribe in Google Reader.

Email ThisBlogThis!Share to TwitterShare to FacebookShare to Pinterest
Labels: Dixie on My Mind, mp3, Music

Wow, absolutely love the music! I can just see those cowboys ridin' off to the prerries for some hisbowdedoos, singin' that good ol' lechu neranena...

BTW the link to lchu neranena is broken, I had to go to their website and listen to it.

Okay, the link should be fixed. I'll pass your comment on!