The Emergence of Shevet Levi - Guest Post by Kol Brisk 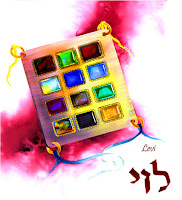 ויעמד משה בשער המחנה ויאמר מי לה' אלי, ויאספו אליו כל בני לוי.
רש"י: כל בני לוי - מכאן שכל השבט כשר.
In this week's parsha, we learn about the great tragedy of the chet ha'egel. Am Yisrael miscalculated the time of the pending return of Moshe Rabbeinu. They were goaded on by a frightening spectre of Moshe Rabbeinu deceased, contrived by the Satan. In a short moment of acute panic and frenzy, they veered recklessly off the special and chosen course paved for them by Hakadosh Baruch Hu. סרו מהר מו הדרך אשר צויתם.

Moshe Rabbeinu descended the mountain and called out,

All of shevet Levi immediately mobilized to his side. They courageously armed themselves and carried out justice, killing off all the idol-worshippers, regardless of who the sinners were and how they were related to them. Shevet Levi thus saved Am Yisrael from annihilation.

Where was everyone else? If we examine the psukim, it is apparent that only a small fraction of the people actually had sinned. Only three thousand men, out of a nation that numbered over half a million men, were killed off. Why did no one except for Shevet Levi come forward and respond??

In order to answer this question, and the question of what is leadership in the larger sense, we must look back.

Levi's course was not a smooth one. He had been strongly reprimanded by his father Yaakov Avinu on his deathbed. Yaakov rebuked him for selling his brother Yosef and for the impulsive way he handled the Shechem scandal. While Yaakov Avinu did not address Levi's motivation, he certainly severely renounced the means of implementation. The the direction of Levi's passionate headstrong nature was yet unclear.

However, in Mitzrayim, Levi emerged.

Instead of intermingling with the society, in cultural exchange, Shevet Levi spent their time immersed in Torah study and Avodas Hashem. When Pharoh approached the Jewish people with his sweet talk, cajoling them into slave labor, Shevet Levi was immune to the overtures. They had no interest in pandering to Pharoh. They were immersed in a world far away from status and position and careers and money-making. By resisting enrollment in Pharoh's public work forces, they gave up their rights to food allowances. They survived Galus Mitzrayim without perishing of hunger only through the generosity of their fellow-Jews. Am Yisrael understood how important it was that one part of the nation remain completely devoted to Avodas Hashem, untouched by the whole Egyptian scene.

The Netziv explains Moshe Rabbainu's question: Who can vouch for themselves that they are consumed with and motivated only by אהבת ה' and not by some self-serving ulterior motive. Who is ready to undertake a most precarious task, while being greatly outnumbered, to fearlessly uproot the spiritually infected from their midst?

Only pure love could have empowered Shevet Levi. Only a great and passionate, unadulterated love for Hashem and His People could have given Shevet Levi the koach to stand up to their closest family members and fearlessly defy their most basic instincts, in order to protect the eternity of Klal Yisrael. This love for Hashem had been tended throughout the long difficult years in Mitzrayim by an on-going quest and commitment to study His Torah and to emulate His Ways.

It would not be a surprise to discover that the word "love" is rooted in the name Levi. Leah Imeinu exclaimed upon the birth of her third son, "Hapaam yiloveh ishi aili."

But as we see with Shevet Levi, this deep intense love is not there by itself. Its is a result of an ongoing process of commitment and investment.

This is what stands up for our people in face of chaos, panic and breakdown.

Click here to get Dixie Yid in your e-mail Inbox or here to subscribe in Google Reader.
Posted by DixieYid (يهودي جنوبي) at 6:00 AM