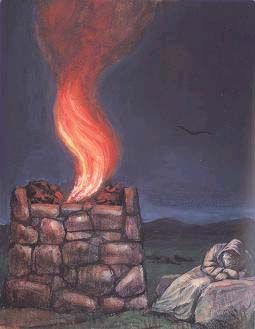 B'nogeah to our recent conversation on whether the true "I" is the body or the soul, I wanted to share the following selection from Rabbi Boroch Leff's book, "Forever His Students," of teachings of Rav Yaakov Weinberg.

For many weeks now, we have been reading in Sefer Shemos of the Tabernacle's construction. And what a beautiful Tabernacle it was! We have studied its majestic beauty and wondrous architecture in great detail.

Yet, much to our surprise and initial dismay, we learn this week as we begin Sefer VaYikra, that the main function of this Tabernacle was to spill blood and to sacrifice animals. Our modern minds have great difficulty with this seeming primitive practice. How are we to relate to blood and sacrifices without dismissing it as archaic? After all, it is quite a significant portion of G-d's Torah, His Instructions for Living. And we can't simply write it off as something that is no longer relevant to us because all of Torah is eternal. So, what's behind the emphasis on blood?

In addition to the Torah's general fascination with the blood of the sacrifices in this week's Torah portion, we also see its central importance to a close relationship with G-d. The very first Rashi comments on "VaYikra -- And He called":

"Calling (Moshe by name) preceded every statement or command (that G-d said to Moshe). The use of 'vayikra-calling' shows affection."

The obvious question is: If indeed G-d called Moshe by name every time He spoke to him throughout the Torah, why is it only mentioned in the beginning of VaYikra?

The compelling answer must be that whatever is about to be discussed in VaYikra is most appropriate for this concept of affection. That is why calling Moshe by name, a sign of endearment, is only discussed here because somehow the subject of blood and sacrifices is most endearing to G-d.

So we must not only explain why the Torah is preoccupied with blood, but also why the service of blood is most endearing to G-d. This will also elucidate an age-old custom[1] to begin a child's Torah education with VaYikra. Somehow we sense that the concept of sacrifices and blood is such an integral a part of Judaism that we build the foundation of our children's education upon it. Why[2]?

The answer is all about having a realistic view of who we are as human beings.

Some religions and spiritual philosophies preach that in order to become holy you must transcend the physical world. The human body with its base desires is just a distraction from pure and intelligent, sophisticated growth. Therefore, it is not important to involve oneself in regulating physical activity. Rather, you should expend effort honing your thoughts, emotions, and feelings. Deal with the mind and not with the body.

These philosophies poke fun at the Torah with its emphasis on the minutia of what foods you can and can't eat, and when you can or can't turn on lights(on Shabbos), etc. They say that the Torah is a "kitchen religion" and not appropriate for an educated, moral individual.

History has shown, however, that such an "intellect-only" approach does not produce morality. In fact, by repressing the body and disallowing the body to become sanctified through spiritual regulation, those who claim to be moral can end up performing ultimate evil.

Ian Kershaw's book, "Hitler 1889-1936 Hubris" describes how much Hitler, may his memory be erased, loved the symphonies of Wagner as a spiritual, sophisticated and cultured person. Kershaw also shows a picture of Hitler carefully feeding deer as a moral and concerned animal lover. Yet, this so-called moral sophisticate perpetrated genocide of mammoth proportions.

This is what the blood in the Temple represents. We could be under the impression that when coming close to G-d in His Temple we should only think lofty, spiritual, and other-worldly thoughts while ignoring the physical body. Therefore, the Torah deals with blood.

We must recognize that the blood, the life force of the physical body, must also be used as part of one's spirituality. The soul is not trapped in the evil body. We don't castigate the body or its drives. The Torah tells us that the body is a necessary component in coming close to G-d and gives us directives, through the commandments, as to how to utilize the body's spirituality.

G-d does not say that we should never engage in sexual activity. Rather, He informs us of the holy and proper basis of such activity called marriage. (The very word for marriage, kiddushin, means holiness.) G-d does not tell us that we can never indulge in eating meat, that we must be a vegetarian in order to be holy, as some philosophies do. Rather, He regulates our "meat intake" with the types of meat we should eat- and so on and so forth for all of Torah. We do not run away from our bodies. We sanctify them.

These ideas also explain why we believe in the reward of the resurrection of the soul with the body, to take place at the end of days. After death, the soul ascends heavenward while the body is buried in earth. At the end of time, we believe that body and soul will be reunited to receive eternal reward. This clearly demonstrates that we value the body as part of our spirituality. G-d wouldn't send the soul to return to prison in the body as an eternal reward, if the body was viewed negatively!

As the Talmud (Sanhedrin 91b) describes, the relationship of body and soul can be compared to a relationship between a blind man and a lame man who are partners in crime.. An orchard owner hired them to watch his orchard but forbade then from eating any fruit. Shortly thereafter, the watchmen couldn't resist. The blind man put the lame man on his shoulders and together they were able to take some fruit. The owner returned furious that they had taken his fruit.

The blind man said, "It couldn't have been me. I can't see!"

The lame man said, "It couldn't have been me. I can't walk!"

Whereupon the smart orchard owner placed the lame man on the blind man's shoulders and punished them together.

A soul cannot sin alone. A body cannot be kind alone. Reward and punishment can only apply to an entity that is the entire person, the body and soul together. Only the body and soul united has free will and is an image of G-d.

We ignore the spirituality of the body at our own peril. If we repress the body and not actualize its holiness, we may distort what true morality is and end up like other so-called "holy," cultured men.

So our focus on blood in VaYikra is not savage or primitive. It's simply the way to get in touch with who we truly are as physical, holy, bodily human beings.

[1] See Klei Yakar (1:1) who connects this custom to why there is a small letter aleph in the word ‘vayikra’.

[2] It is important to point out that whenever we attempt to offer a "reason" for a commandment, we are never actually giving the reason. Since G-d is infinite, He has infinite reasons for His commandments. Rather, offering reasons for commandments is merely a method through which we can derive practical benefits from the mitzvah. The Hebrew word for reason is "ta'am" which also means taste. We get a "taste" for the mitzvah by offering reasons, realizing at the same time that our reasons are not reasons in the true sense of the word. A commandment from G-d is applicable at all times and for all generations. Therefore if a "reason" offered for a mitzvah no longer applies, the mitzvah applies nonetheless due to G-d's infinite reasons for observing it, which will always apply.

Picture courtesy of chabad.org. Click here to get Dixie Yid in your e-mail Inbox or here to subscribe in Google Reader.
Posted by DixieYid (يهودي جنوبي) at 5:58 AM