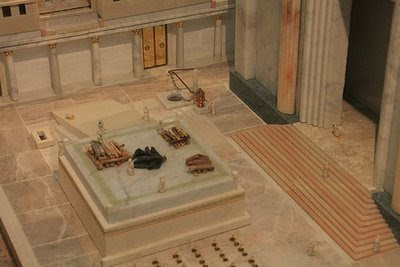 Today, we have no Bais Hamikdash. We have no mizbai'ach. We cannot bring korbanos. Chazal teach: Unishalmah parim s'fasaynu, Our lips have the power to replace the oxen.

The mefarshim give us some interesting glimpses into the experience of bringing a korban in the time of the Bais Hamikdash:

The Mai Ha'shiloach gives the case of a person who got an idea to do something new. For example, he desired to build for himself a large new home. However, he had certain hesitations and fears. Where was this desire coming from? Was it a real need of his? People would be surprised and would talk etc. These thoughts caused him to be not completely at ease with his plans. Perhaps his misgivings were a sign that this was not a right thing to do. Perhaps this was a sign that this was not the Ratzon Hashem, the Divine Will?

This person would then bring a korban olah and mincha.

The purpose of his olah was in order to submit his ENTIRE ratzon, desires and intellect to Hashem Yisbarach, in order that Hashem would direct the person in the direction He willed. The olah is ENTIREly sacrificed on the mizbai'ach. If the project was truly Hashem's Will, the korban would effectively subdue and clear away all the hesitations.

Once the proper direction, for or against the plan, became clear, the mincha would assume its function. If this person was to build his new house, the mincha would give him great motivation, confidence, energy and enthusiasm to proceed with his plans. If it was not the Ratzon Hashem for the person to embark on the project, then, by bringing the olah, he would lose his motivation and interest. Then, however, the person could be beset with afterthoughts; why was this plan not right for him? By bringing the mincha, the person would become Divinely enlightened as to how such a home would have had a damaging effect on a certain aspect of his character. The mincha would put the person's mind at REST.
Mincha - its root connotes REST.

Two people could jointly bring the olah, for submission before G-d is something in which everyone is equal. The mincha, however, could only be brought by one person alone. This is because peace of mind is very individual, and translates differently for every nefesh miYisrael, every Jewish soul with its own needs.

A shlamim was brought by a person experiencing any sort of anxiety or unsettled feelings. The shlamim would restore wholesomeness, peace within the person, peace with his environment, and with his Creator.

Unishalmah parim s'fasaynu.
All of the above functions of the olah, mincha and shlamim can be achieved today through proper tefillah.

I personally know someone who, through tefillah, by saying tehillim, clarified strong misgivings in the realm of shidduchim. Interest in shidduchim that were all wrong for him faded out; and eventually, for the shidduch that was very right for him, about which he was not so sure, he acquired interest and motivation. Today, he is Baruch Hashem, very happily married to a wonderful and devoted wife, and has b'ayin"h beautiful children.

Also, someone had a complex question of how to conduct himself in a certain situation. For a long difficult period he carried the doubt with him. Unable to continue to bear the strain, he sat down one night, recited the entire Sefer Tehillim without interuption, concentrating from the depths of his heart specifically on this question. Within two days, the situation became much more clarified.

V'nefesh ki sakriv korban mincha laHashem
The Netziv miVolozhin explains that the mincha was brought to atone for hashchasas hanefesh b'midos, that is deterioration of character. The example in Tanach that he brings is Shaul HaMelech. David suggested to him to bring a Mincha, for he was suffering from ruach ra'ah, resulting from, what was on his level, depression and anger. There are four types of mincha, corresponding to the four humours or four elements. Each person has his unique combination of these four. Extremities in any direction are the cause of midos ra'os.

The Ba'al haTanya teaches us that Am Yisrael starts out in the first place with a relatively speaking refined nefesh habehemis, vital soul. This is because of our ancestry. We all inherited in our genes compassion, modesty and generosity! So on first glance, on a superficial level it is difficult to discern our weaknesses.
Here they are:

And Hashem waits to hear from us. And He listens. And He answers.

Harchev picha va'amaleihu.
Just open your mouth (in tefillah) and I will fill it up, urges G-d.

May the service of korbanos be restored speedily in our days.

Picture courtesy of flikr. Click here to get Dixie Yid in your e-mail Inbox or here to subscribe in Google Reader.
Posted by DixieYid (يهودي جنوبي) at 6:00 AM

I have a question...so would the act of doing the Korbanot somehow bring some "inner peace" to the person about their doubts...or were they looking for a "sign"?

thanks! and Good Shabbos!

Yes, the Korbanot , if brought properly, with the person's entire being involved, would accomplish this. However, if the korban was brought in a superficial manner, it would not.