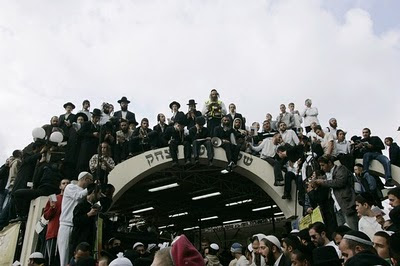 He quotes four amazing mitzvos in one short pasuk at the end of the fifth aliya (Devarim 10:20) of the parsha:

Just to summarize one kav, one theme, in this long piece from the Toldos, he brings different ma'amarei Chazel which show how each of those mitzvos is teaching us different ways to connect to Hashem through the talmidei chachamim and tzadikim of the generation.

He even connects this theme of connecting to Hashem through the tzadikim and the talmidei chachamim through the fourth mitzva in the pasuk, the mitzva to swear only in Hashem's name, and not to swear in any other god's name. He quotes the Rambam in Shorshei Hamitzvos (Mitzvas Asei 7) who says that if one swears in Moshe's name, and has in mind Moshe's Master, and the One who sent Moshe, then it is as if he swears in Hashem's name, but if he has in mind that Moshe is an essential power and he is swearing in Moshe's name directly, he transgresses the prohibition of shituf. ("נשבעת אומתנו בשם משה רבנו (מה נכבד שמו), כאילו אומר הנשבע "באלוקי משה", "במי ששלח את משה" .אבל כשאין הנשבע מכוון לכך ונשבע באחד הנבראים מתוך אמונה שיש לאותו הדבר אמתות בעצמו עד שישבע בו - הרי זה עבר ושיתף אחר עם שם שמים [ועל זה] בא בקבלה: 'כל המשתף שם שמים עם דבר אחר - נעקר מן העולם'.")

We see a common denominator then in three of the four mitzvos in this pasuk. The mitzvos of clinging to Hashem, swearing in Hashem's name, and the mitzva to fear Hashem are all fulfilled through various types of attachment to tzadikim and talmidei chachamim. It should go without saying that this does not imply some sort of vicarious closeness with Hashem such that our connection with tzadikim would somehow absolve us of the need to connect to Hashem ourselves. Rather, in Chassidus in general, attachment to tzadikim means attaching ourselves to them and listening and observing their teachings so that we can grow close to Hashem with their help.

But how does the second mitzva in the pasuk fit in? How does "אֹתוֹ תַעֲבֹד," which implies the avodah of tefilla (Sifrei, quoted by Rambam), davening, connect with the other three parts of the pasuk, which relate to various ways of connecting to the tzadikim and talmidei chachamim?

I thought that we can see the connection between attachment to tzadikim and tefilah in what Rebbe Nachman says in Likutei Moharan I:2. He says that before a person davens, he should specifically have in mind to connect himself to all of the true Tzadikim. He discussed the lead-up to the building of the Mishkan, and pointed out that everyone brought different gifts to Moshe for the building of the Mishkan (Shmos 39:33) but that only Moshe knew how to put all of the pieces together to build the Mishkan (Zohar Pikudei 238b). Similarly, every Jew has different strengths and may daven for a wide variety of things. But the tzadikim have the ability to put all of the Jewish people's tefilos together into into their proper places as one "koma sheleima," one perfect structure within which the Divine Presence can rest in this world.

With this teaching from Rebbe Nachman, which shows the importance of connecting to Tzadikim so that our tefilos will accomplish their potential, we can now understand what the mitzva of "אֹתוֹ תַעֲבֹד," serving/davening to Hashem, is doing in the context of the other three mitzvos in this pasuk, which cover the concepts of fear of, attachment to, and swearing by Hashem and the Tzadikim. All four share the fact that they all teach the importance of connecting to Hashem by attaching ourselves to the Tzadikim, who can teach and assist us in reaching our full potential.

May we merit to connect to the Master of the world and to His Tzadikim!

Picture courtesy of A Simple Jew. Click here to get Dixie Yid in your e-mail Inbox or here to subscribe in Google Reader.

Please donate to my son's cheder by going to minivanraffle.org to buy a raffle ticket. The drawing for a new minivan, car, or $20,000 cash will be IY"H Chanukah time. $100 for 1 ticket. $360 for 5. Where the form says "Referred by," please write "Dixie Yid." Tizku l'mitzvos!