Was Supression of Abuse Victims the Real Reason for the Internet Asifa? (Hint: Depends who you Ask) 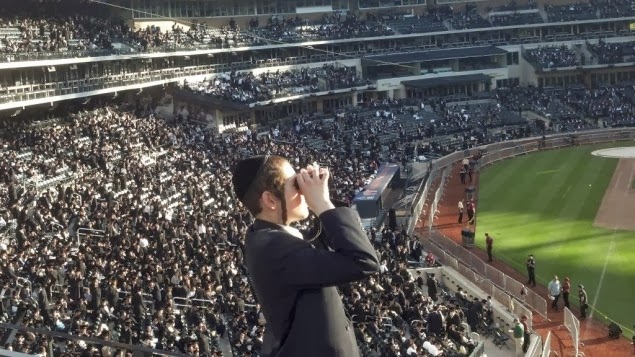 I have been thinking about the issues relating the my post on Thursday  about the approach of many in our community to place the burden on the victims of sexual abuse rather than stand up to abusers and enablers and protect abuse victims.

In connection with reading about that issue, I saw another article written by Judy Brown, the author of Hush, relating to the big Internet Asifa at Citi Field last year. The article was posted on Dovid Teitelbaum's blog, Tales from a Summer Camp and was called, This is why the Internet Asifa is Important for K’lal Yisroel.

In it, she writes about why she feels it's important for people to attend a protest outside the Asifa by supporters of sexual abuse victims. Their rallying cry was "The Internet is not the Problem." While it's clear that Internet filters are absolutely necessary in my opinion, I also agree that "the Internet is not the [real, underlying] problem," for reasons explained by my Rebbe here and here.

But Mrs. Brown offers a different, seemingly left-field explanation of what she views as the "real" reason for the Internet Asifa: The chareidi community wanted to make the Asifa because the Internet must not be allowed in our community since it (i) gives people a way to reveal the "moral decay" within the chareidi world to the outside world and (ii) empowers victims of sexual abuse by connecting them with others in a similar situation and sources of help and information, which in turn makes the abuse harder to keep under wraps.
As someone completely outside the world of abuse victims, my initial reaction is that this explanation is completely left field (no Mets pun intended). And, right or wrong, because of the "wholesome lie," as she so poetically describes it, told by many parts of the various chareidi communities, abuse as a reason for anything is very far in the periphery of most people's minds. While there may be some people who may have consciously had this reason for supporting the Asifa, I don't think it was a major part of the organizers' motivations. While it could be debated or argued that they missed the real underlying problem, most people's primary motivation is helping protect ourselves and our children from the impurity which is so accessible on the Internet, which is a positive goal. The worst one could say is that the focus was misguided, but the truth is that there was nothing consciously nefarious about it.
That being said, why would Mrs. Brown and so many others believe that the primary reason for the Asifa is to silence sexual abuse victims? To clarify, I'm not suggesting that I don't agree with her that one of the positive things about the Internet (much more important than my ability to share Torah on this blog!) is its ability to connect abuse victims with one another, connect them with resources, help, and law enforcement, and raise awareness so more people will take greater steps to prevent and stop abuse. But that aspect of the Internet is not what most people think of as its defining character. Most people think of it either as a practical tool, a source of entertainment, and/or a source of filth no Jew should be exposed to.
I believe that Mrs. Brown and others saw the the purpose of the Asifa the way they did because the primary importance and character of the Internet in their lives is as a literal lifesaver. It is one of many people's only sources of information, connection, and help, and is a powerful tool in exposing abuse and abusers in order to begin taking steps to fix broken, corrupt systems. For them, that is what the Internet is all about. That is its defining essence in their lives. It is a life preserver that literally saved their lives. In their expeirence, moral decay comes from within the community, not from the outside. The information and connections they find on the Internet feels like the first breath of air inhaled by someone who was drowning.
So from their perspective (assuming I'm right about charactarizing that perspective - anyone who has expeirenced this is welcome to share their actual perspective), if someone is trying to cut off frum people's access to the Internet (the same Internet wose defining attribute is as a lifeline for those suffering from abuse and intimidation), the only explanation is that their primary motivation is to further silence abuse victims and perpetuate the moral decay within the community.
For the majority of people, however, who are not connected in any way to abuse, the Internet does not have that kind of a life preserver nature. That is just not its defining nature in their mindds. It has a different significance to them. It is something they need for work, or want for self-expression, entertainment, or as a way of giving into their illicit desires. For them, it's character is largely as a conduit of impurity, too easily brining filth into Jewish homes and minds. That is why it should be curtailed. That's why Mrs. Brown's charactarization is utterly baffling to those who are (thankfully) not part of the world of abuse.
I hope that by writing this, it will serve as a way of helping people coming from very different perspectives understand where one another are coming from. I also hope I'm not too off-base. IY"H, may we merit to stand up to abusers rather than victims and only use the Internet for good things.
Picture courtesy of Times of Israel. Click here to get Dixie Yid in your e-mail Inbox or here to "follow" me on Twitter.
Posted by DixieYid (يهودي جنوبي) at 8:00 AM