The daughter-in-law of an acquaintance of mine in the community just passed into the next world two days ago, on Monday. They discovered that she was suffering from oso hamachla 8 weeks ago, when she was 7 months pregnant. They caused the birth of a baby girl 4 weeks ago and operated at that time. A tremendous number of people in the community and around the world have been davening for her recovery. But in the end, she passed away anyway. She was 31 years old and left behind a husband and 3 daughters under 7 years old.

Because I wanted to support the father-in-law in this incredibly difficult time, I worked from home yesterday and attended the funeral, which was obviously very hard.

After mincha/maariv last night, I mentioned to Rav Weinberger that I had been at the funeral and that it was‎ very difficult. I think because he knew that I did not have a very close personal connection with the family, and I was not a close relative, this is what he said: 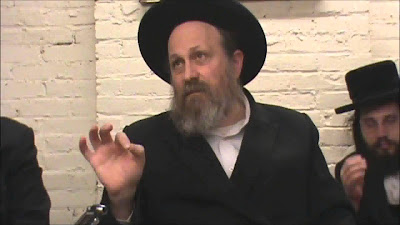 "It's very hard, but there is also such good news. Chanan (a member of the shul) just had a baby boy. So many other babies have come into the world in the past couple of days. Misha and Estee (other members of the shul who were in a serious car accident Sunday night) have seen tremendous miracles in their recovery‎. There is so much to be thankful for."

Rav Weinberger was giving me gentle mussar and teaching me an important point. There is bad news all over the world and I (and i'm sure many other people - that's why i'm posting this) focus excessively on that or feel that I'm not feeling other Jews' pain if I don't dwell on tragedies.

‎It's important to note that the nifteres here was not my sister, best friend, or sister-in-law. Accordingly, this was not my pain. It was a question of feeling other Jews' pain. So Rav Weinberger was showing me how someone in my position should view tragedies. I should not put such an inordinate focus on them to the exclusion of other Jews' joyous occasions and smachos. ‎It shows that I don't truly connect to other Jews if I fail to focus on their celebrations and only notice tragic news. That lopsided focus only empowers the Kingdom of Sadness.

May I and the rest of us merit to rejoice in other Jews' much-more-numerous happy occasions and not place an inordinate emphasis on the sad times.

I find it curious that that's what Rebbi told you at this particular time; to my mind your response (if I'm reading correctly you consulted with him the evening of the funeral) was appropriate - maybe if you were still low days later I would understand why Rebbi gave that perspective. Isn't this a time of working on achdut in the vein of "imo anochi b'tzarah" when such things occur, in addition to sharing in simcha with good news? I find it commendable that you felt this acutely with someone you weren't particularly attached to or close with...

Reb Shmuel, I hear what you're saying, and with your additional point about it davka being the three weeks, that was exactly my hava amina. I somewhat expected a commiserating response from Rebbe regarding the sorrows of recent news. But I think that's why Rebbe's words were a mussar for me. As the Pesach Seder story went, Hashem does not want us to be "maror fressers." I think Rebbe was indirectly telling me that I was being a marror fresser, and that we shouldn't strengthen the side of din by giving it inordinate focus.

I identify with RMW's point. "maror fresser" is a great term to describe the phenomenon. In the immediate aftermath of 9/11, I was obsessed with following each piece of tragic news as it came in, and was repeated, and repeated, and repeated, over the following weeks. I interpreted my obsession and concern as some act of righteousness and Nosei-B'Ohl-Im-Chaveiro piety. But in the long run, the excesive attention really had no positive outcome. It only caused me a tremendous amount of pain that still lingers, as a second-hand form of PTSD. (I am not making any clinical claim.)

Here's the story I got that term from:

There is a story of the Kotzer Rebbe at the Seder. One year, it appeared as if he was going to skip Maror and go to the meal. The chassidim at the table signaled to the Avnei Nezer, the Kotzker’s son-in-law, to say something. So the Avnei Nezer approached his father-in-law and said “Maror?” The Kotzker then slammed his fist on the table and yelled “Maror fressers! Maror fressers! Maror snackers!” over and over again. The chassidim became frightened and all of them ran out except for the Avnei Nezer. When the Kotzker stopped yelling, he asked the Avnei Nezer why everyone left, so he explained that they were afraid. The Kotzker then told the Avnei Nezer that there was enough suffering and bitterness in the world that we do not need to ask for it. He did not forget about Maror, but was trying to accomplish something which would end the bitterness.