A Ma'aseh About the Meor Einayim 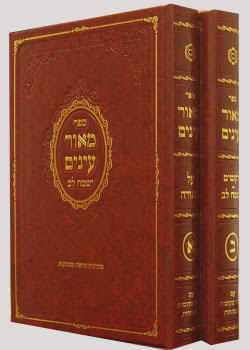 My rebbe tells a story about an alter Litvak that used to learn in the same Bais Medresh that he did. He told my rebbe that many years earlier, he started to lose his eyesight, to the point where he could not read and everything in front of him was covered with a white haze.

He was most defnitely not interested in going to Rebbes, and he did not intend to do that at all. But his wife insisted that he at least go to the Satmar Rov, Rav Yoel Teitelbaum. He finally agreed since the Satmar Rov was a great talmid chacham, so altz that, he would go to see him.

When he got there, he explained the problem, and the Satmar Rov told him to learn the sefer Meor Einayim every Friday night. And even if he couldn't read it because of his eyesight, someone should read it to him, and he would soon get better. This was not the kind of advice he was looking for, but since he'd already gone, he decided to do it anyway.

The first Friday night, someone read it to him, and his eyes started to get better! He kept it up every Friday night for about a month, till his eyesight was back to normal and he could see again.

My rebbe and the others there who heard the story asked him, "Nu, so did you continue learning the sefer Meor Einayim?" He answered, "No, it worked and so I didn't need it any more!"

Cute story. But may the Torahs of the Meor Einayim be a light to our eyes!

This is nothing short of unbelievable. It reminds me of the old joke [and forgive me the New Yorkese, you can substitute a Dixie town if you wish]:
A guy was driving in Manhattan, the heart of NY City, looking for a parking spot. As he slowly became aware of the near-impossibility of his situation, he lifted his eyes and his heart to the One Above, saying, "Oh Dear G-d, if you get me a parking spot, I'll do anything - daven, put on tefillin, keep mitzvos, anything!"
So almost instantly a man pulls out from a choice parking spot.
Our driver looks up again & says, "Never mind, I just found one."
One would think that a Yid whose eyesight was saved by learning the Meor Einayim would learn it for the rest of his life!

I agree, that's what you'd think but I don't think the purpose of the story is as a look-at-the-callous-Litvak story. Obviously, the main point is to show the holiness of the sefer Meor Einayim.

But legabei the alter Litvak who told my rebbe this ma'aseh, I somehow can't find it in me to get too frustrated with him. I think it's precious and really says something about our people that we stay true to our mesorah, and we're not swayed by wonders and miracles. This alter Yid received a mesorah and he stuck to it, wonders notwithstanding. I really find something special about that, despite my disbelief at that trait's manifestation in that story.