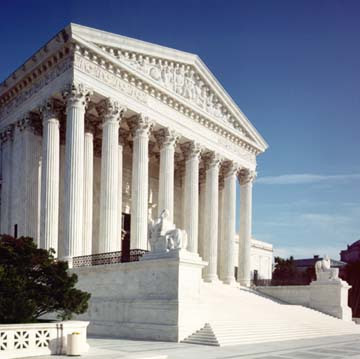 Yitz at Heichal Hanegina has a great post here regarding R' Dovid'l from Tolna, son of the Meor Einayim, R' Nachum Chernobyler. You should read the post at that link before you read what I write, as I'm commenting on his post.

This piece has a lot of great stuff, both about the ideal Beis Din, and about the comparisons with the secular legal system. As a law student in the evenings after work, I'm interested in both. So I wanted to add a couple of things, in no particular order.

The dispute in the Tolner Rebbe's story between the Lion and the Wolf is exactly parallel to the first case every law student studies in his 1st year Property course, Pierson v. Post, from 1805 in New York. That was a case of a fox hunter (Post) who was in hot pursuit of a fox and, using his hounds (here, the fox didn't get to be the judge!) almost had it when and a Johnny-come-lately interloper, (Pierson), swoops in and kills the fox before Post can finish it off. Based on this case, the common law became that one acquires the animal when one captures or mortally wounds it, not merely chases it for a long time, so the Lion should have gotten the whole sheep, and shouldn't have had to split it, as the fox ruled. That case predated the Tolna rebbe's story by almost 40 years, but apparently the fox didn't follow the British/American Common law precedent!

Also, regarding the dispute between the Chassid and the Poritz, relating to the enforcement of a verbal contract for the sale of land; The Statute of Frauds was passed in 1677 and says that certain types of contracts have to be in writing to be enforceable in a court of law. One type of contract that must be in writing to be enforceable is that of an interest in land. Here, the Chassid is buying a section of forest for the purpose of lumbering, so it is an interest in land. Therefore, it would be within the Statute of Frauds, and would have to be in writing to be enforcable according to British/American common law. Here, the civil courts in Tolna must have had a similar law because the story said that the Poritz knew he wouldn't be able to enforce the contract in civil court.

With regard to the Rebbe's mashal, which teaches us how the Beis Din is far superior to secular courts partially because the cost of litigation is so much less, and the awards aren't eaten away by those pesky lawyers; There was an interesting article from 2 days ago at Law.com about a little employment law case that got so bitter and drawn out, that at the end one side sued the other for $150,000 in attorney's fees for a simple overtime dispute!

Thank you Yitz for a great post at Heichal Hanegina!

And thanks to you, Dix, for a lovely follow-up to my post! You should know that much of secular law has its roots in Talmudic law, and one's knowledge of the Babas [Kama, Metzia, & Basra] and other legal-heavy Mesechtos [Kesubos] can be very helpful for those in law school!
I think the fox's "psak" of "yachloku" [dividing the spoils equally] was only to get to the part where he had to make sure the shares were equal, but it's quite possible that the Gemara would also agree that the one who actually catches the animal acquires it, not the one who was chasing it. This is indeed the case with a lost object [Baba Metzia, 2nd chapter], where one who picks up a lost object acquires it, rather than the one who "saw it first."

Well, it certainly was a good post, in that it really got my synapses firing, with all sorts of connections to different parts of the story. Keep it up!

For an even earlier anticipation of Pierson vs. Post, see the Talmud, Bava Meziia Chapter 1, 10a

"MISHNAH. IF ONE SEES AN OWNERLESS OBJECT AND FALLS UPON IT, AND ANOTHER PERSON COMES AND SEIZES IT, HE WHO HAS SEIZED IT IS ENTITLED TO ITS POSSESSION."

Yasher koach! Thanks for pointing that out. Gut Shabbos!

Please be very careful about using quotes from, or linking to, "come-and-hear.com". Although the site contains an online compendium of the Soncino Press translation of the Talmud, it is primarily posted as fodder for an evangelical attack on Judaism. The site administrator "Carol A. Valentine" prints numerous articles which rehash a wide variety of anti-Semitic charges against both Jews and the Talmud, and unfortunately the breadth of the translations appear to lend credence to her claims. Many anti-semitic groups link to her site to justify or 'prove' assertions of Jewish perfidy and immorality.

Whoops, I had no idea about the creepiness of come-and-hear.com