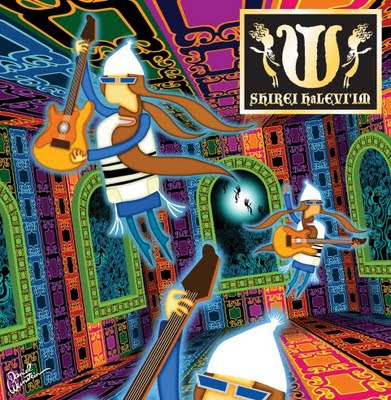 My holy and awesome friend and inspiration R' Ben Epstein (highly sought-after Sgan Mashgiach at YU) lists, among his many talents, the fact that he has a beautiful voice and a talent for composing great music.

You can hear one of his songs from his new album, Shirei Halevi'im, in-full right now. The song is "Ra'ava D'Ra'avin." The words are from Mizmor L'Dovid, the 23rd perek of Tehillim. Just click on the "play" button next to the title of the song, Ra'ava D'Ra'avin over at CDBaby. You can also get these songs at iTunes.

R' Epstein has structured this album after the days of the week. So the songs are "Sunday," "Monday," etc. and then three additional songs, including Ra'ava D'Ra'avin. You can sample portions of all of the songs and then either buy individual songs, the whole album, or order the physical CD at iTunes or over at CDBaby.

The artwork for the album is by Dan Weinstein, who has been featured here already.

Pictures courtesy of the Ben Epsteins of the world and Dan Weinstein. Click here to get Dixie Yid in your e-mail Inbox or here to subscribe in Google Reader.

i have the album, happens to be amazing!

i also haev the album. Rav Benjy's song is one sung from and to the depths.

You removed the link!